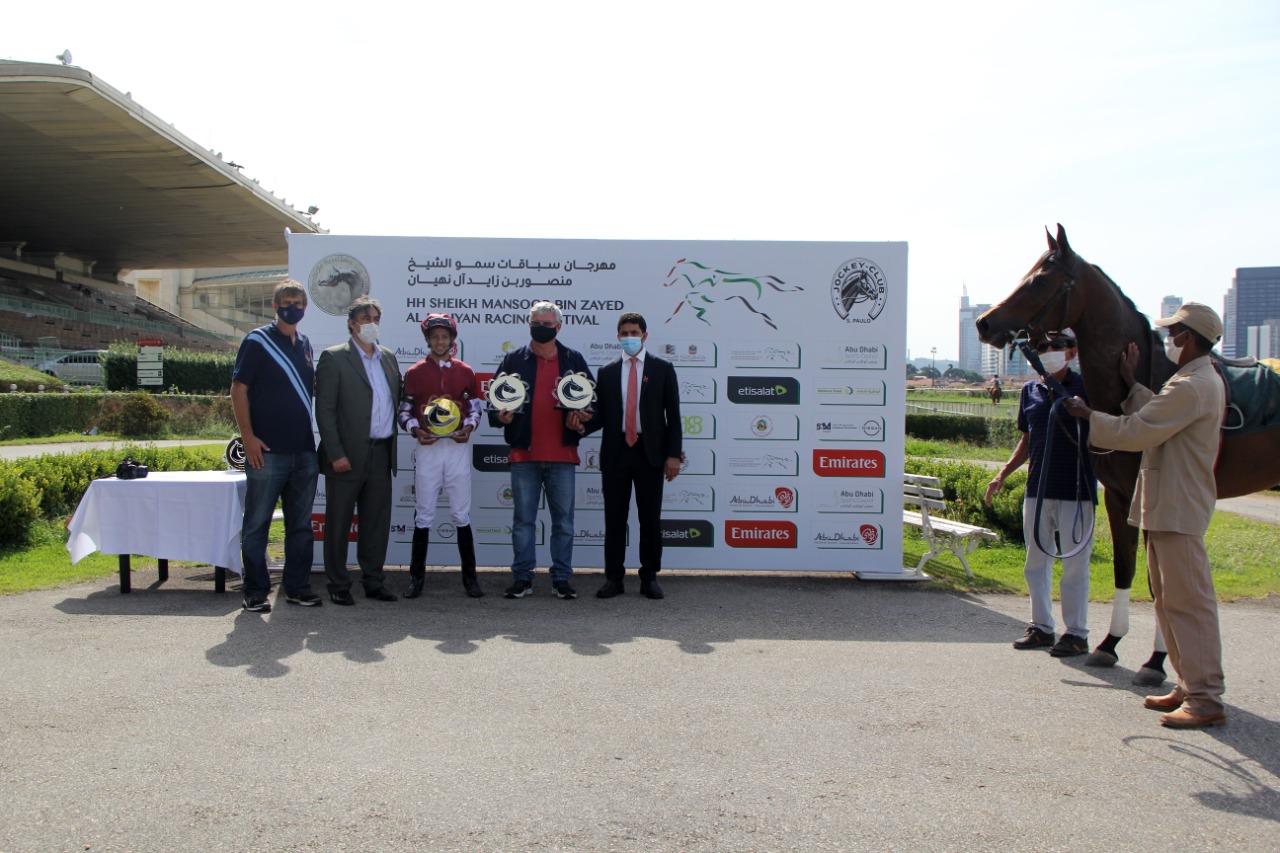 The first race was the Grand Prix Wathba Stallions Cup for Colts, held at 1,300m on turf for 3 years old and more up to three victories, with the participation of eight horses, and was won by Clapton AJR in his debut race.

The race was very well fought before the final stretch with Gunther Rach (Eksort Rach x Geneve AJR by Second Chall) in first, Graccus Rach (Veracious Rach x Gracyara HCF by *LD Halston) in second and Clapton AJR (Mared Al Sahra x *Cowboys Gal by Wiking) in third. When entering the final straight, Mentor Rach (*Sarmata x Musa Rach by *Polonez), on the outside, and Clapton AJR, inside, followed by RG El Bak (RG Karat x *Endora by Wojslaw), dominate the race and dispute the first place and distance themselves from the others.

Clapton AJR, three-year-old colt owned and bred by Almir José Ribeiro, the first son of Mared Al Sahra born in Brazil, ridden by Apprentice jockey W. Ariel and trained by Oberdan Pereira, in his debut race, shows that comes with a strong desire to win and opens up three lengths of advantage over Mentor Rach, winner of the Wathba Stallions Cup for Colts in December 2020 and two races this year.

The apprentice jockey, W. Ariel said: “Because it was his debut, he responded very well to the commands and because he was a very calm horse he impressed me. When we took second place, I knew he had a chance to win because he wanted to race more and it was exciting to win over Mentor Rach, who is a horse who has won two races this year and has a lot of potential.”

Trainer Oberdan Pereira said: “Since he arrived I told Almir (Owner) that he is a distinguished horse with the potential to win. He is in excellent condition and has shown that he has a pedigree to win the races.”

“At first I didn’t want Clapton AJR to run because he had very strong opponents, horses with victories and experience, but at the insistence of Oberdan who said he was ready for the challenge, he ran and won. I believe we have a future champion and the most important thing is that it was the debut of Mared Al Sahra’s first son in a race that is part of an international calendar and wins on his debut”, declared Almir José Ribeiro, owner of Clapton AJR.

In the second race, the Grand Prix Wathba Stallions Cup for Fillies, held at 1,000m on turf for 3 years & older up to two victories, which had seven animals, including last year’s winner Osiris Rach (Eksort Rach x Olympia Rach by *Aicyng AHRA) who takes the lead and keeps it until the final 150 meters when she is overtaken, on the outside, by RG Kodak mounted by R. Mendonça, who crosses the finish with a length of advantage.

RG Kodak, owned and bred by Claudio Roberto Ribas, is trained by Estanislau Petrochinski who said: “RG Kodak had an excellent race and won in a battle with Osiris Rach, champion of the race in December last year. I believed that she would win because she is in excellent condition and I am sure that she will improve a lot when the distances increase.”

“She started easily and I followed the competitors to know the exact moment to define and in the final meters she did her part, because she was very willing to run. I am very happy because I won my first race with her and I hope to win the next ones. She is a mare with a great future and will certainly be champion”, said apprentice jockey R. Mendonça.

The races and awards were attended by HE Mr. Ibrahim Salem Alalawi, Consul General of the United Arab Emirates in the State of São Paulo.

“The Purebred Arabian Horse Races, which were held at Hippodrome of Cidade Jardim, are sponsored by HH Sheikh Mansour Bin Zayed Al Nahyan Racing Festival and are organised and supervised by the Brazilian Arabian Horse Breeders Association.

On this occasion, I would like to thank His Highness Sheikh Mansour bin Zayed Al Nahyan, Deputy Prime Minister and Minister for Presidential Affairs, for his unlimited support for sport in general and equestrian sport in particular, which has had a major impact on the current status and in the future of Arabian horses around the world.

We are proud when we see the flag of the United Arab Emirates flying in the fields of Brazil and also the important sponsors with the success that the Festival has achieved here and in various parts of the world.

Finally, I would like to thank Ms. Lara Sawaya, CEO of the festival, and also the team for their continued efforts to make this festival a local and international success”, said HE Mr. Ibrahim Salem Alalawi.

“The most important fact of these two races is that we have a new generation of horses arriving, with new pedigrees, different stallions, which means stepping forward in our races and always placing our breeding on the Arabian horse racing itinerary in the world.

It is important to note that these two Grand Prix that is played at the Jockey Club of São Paulo is part of the world calendar of the Wathba Stallions Cup that is held on 5 continents, which puts Brazil and our breeding of Arabian horses on the international stage of Arabian horse racing.

We want to thank HH Sheikh Mansoor Bin Zayed Al Nahyan, Deputy Prime Minister and Minister for Presidential Affairs, who is also Chairman of Emirates Racing Authority (ERA) and Emirates Arabian Horse Society (EAHS), for their sponsorship, to Lara Sawaya, Director General of Festival, to the Jockey Club of São Paulo for the partnership and the board of the Brazilian Arabian Horse Breeders Association for the commitment and dedication to the Arabian Sport Horse and the passion and enthusiasm of our breeders for our Arabian Horse ”, said Almir José Ribeiro, Racing Director at ABCCA.

The Wathba Stallions Cup for Colt and Fillies are organized by the Brazilian Arabian Horse Breeders Association in partnership with the Jockey Club de São Paulo.

Since 2015 Brazil has been part of the HH Sheikh Mansoor Bin Zayed Al Nahyan Racing Festival calendar when organized, in October, the first race of the HH Sheikha Fatima Bint Mubarak Apprentice World Championship (IFAHR) in South America, which had the participation of ten apprentice jockeys.

HH Sheikh Mansoor bin Zayed Al Nahyan Racing Festival was launched for the first time in 2009, as directed by His Highness Sheikh Mansoor bin Zayed Al Nahyan, Deputy Prime Minister, Minister of Presidential Affairs and Chairman for the Emirates Arabian Horse Society. It is an important factor in the increased diversity of the activities of pure-bred Arabian racing. The Festival aims to continue the considerable efforts made by the late Sheikh Zayed bin Sultan Al Nahyan, in the context of the preservation of heritage and traditions.