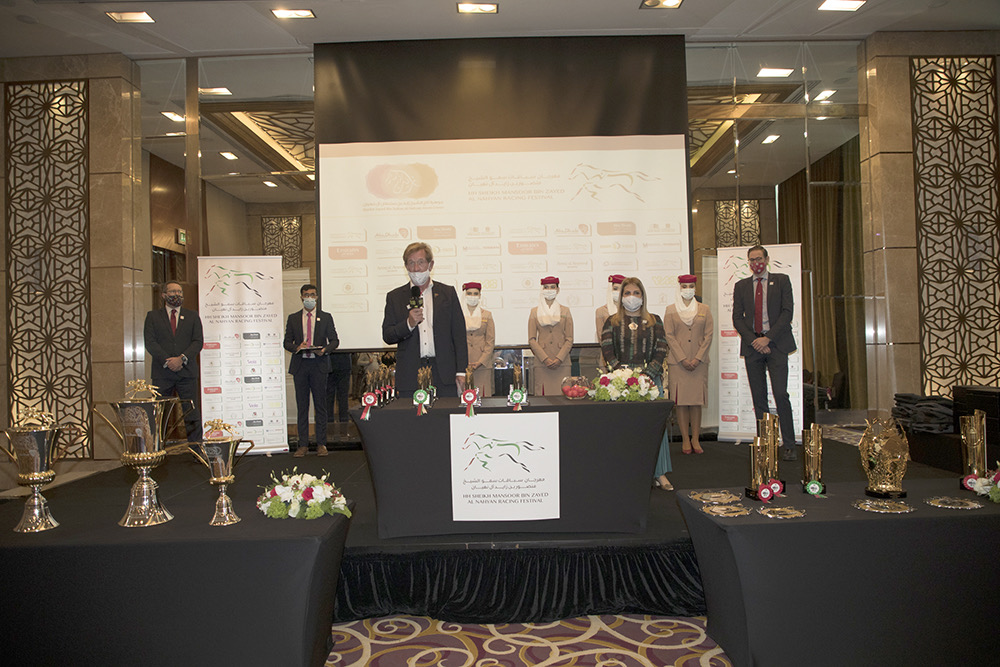 Sumoud, one of the big favourites to win the new-look Sheikh Zayed Bin Sultan Al Nahyan Jewel Crown (PA Group 1) may not have drawn a perfect gate for Friday’s Dh5 million contest in Abu Dhabi, but neither did he receive the worst according to his veteran trainer Jean De Roualle.

A winner of four of his last starts, including the Prep race for the Jewel Crown over course and distance (2,200m) four weeks ago, the Yas Racing homebred will break from stall nine of the star-studded 16-runner field of Purebred Arabians from around the world.

Among them are challengers from the USA, Belgium, France, Oman, Doha, Saudi Arabia and the UAE.

“The form that he showed four weeks ago in the Prep was amazing,” De Roualle said during Tuesday’s Post Position Draw ceremony that was held at the Meydan Hotel in Dubai.

“However, on Friday he will be up against some of the best Arabian horses in the world. Even though I’ve been training for over 40 years, I’m still a little superstitious but he makes me feel optimistic. He has progressed through all his starts and all the green lights are on for him. I think for the first time UAE horses in the race might enjoy a slight advantage because of the weather and the COVID. Our horses are a lot fresher while the European have had to travel through the winter climate through, France and Amsterdam to get to Abu Dhabi. It can take a lot out of them.”

The Frenchman acknowledged that in a field packed with high-class horses, the race could turn into an intense tactical battle for horse and rider, which again, does not worry him.

“One thing’s for certain, there’s going to be a lot of early pace in the race as the jockeys will look to grab the rail,” he said. “That’s good because it will eliminate any potential traffic problems soon after the break.”

One of the biggest threats to Sumoud’s hopes is a high-class European horse called Messi, who is trained in Belgium by Timo Keersmaekers.

“I was hoping to be a little closer to the rail but eight is fine,” said Keersmaekers. “He’s got good natural speed and hopefully he gets a good break and he can go on from there to run a big race.”

An eight-year-old son of Dahees, Messi, is the only Arabian in Keersmaekers’s yard but a horse that he would not trade for anything.

“He’s a very calm and sweet-natured horse,” said Keersmaekers. “He’s been around for quite a while and with a lot of trainers. But I’ve been taking care of him this season and he has really flourished. He’s stronger, physically and mentally. With a little luck he should run a good race. It will be a tough, but we’re very happy to be here.”

The sought-after first post went to Omani-bred BF Mughader whose trainer Ibrahim Al Hadrami said that it could by an ominous sign.

“The first gate, the first place,” he said. “It’s a good gate, I like it. This is a tough race, but he’s drawn well. The inside will help him save some ground. Let’s see what happens on Friday.”

French handler Elizabeth Bernard saddles two runners including Hajres who will break from gate three and Jaaznah Athbah who drew the 13th post.

“I’m OK with both my draws,” she said. “In France 13 is a lucky number so I’m happy no matter what other people say that 13 is an unlucky number. It doesn’t worry me at all. I’m so privileged to be here with chances in one of the world’s richest races. It’s very special.”

No general public will be permitted but the race will be broadcast on Yas TV.