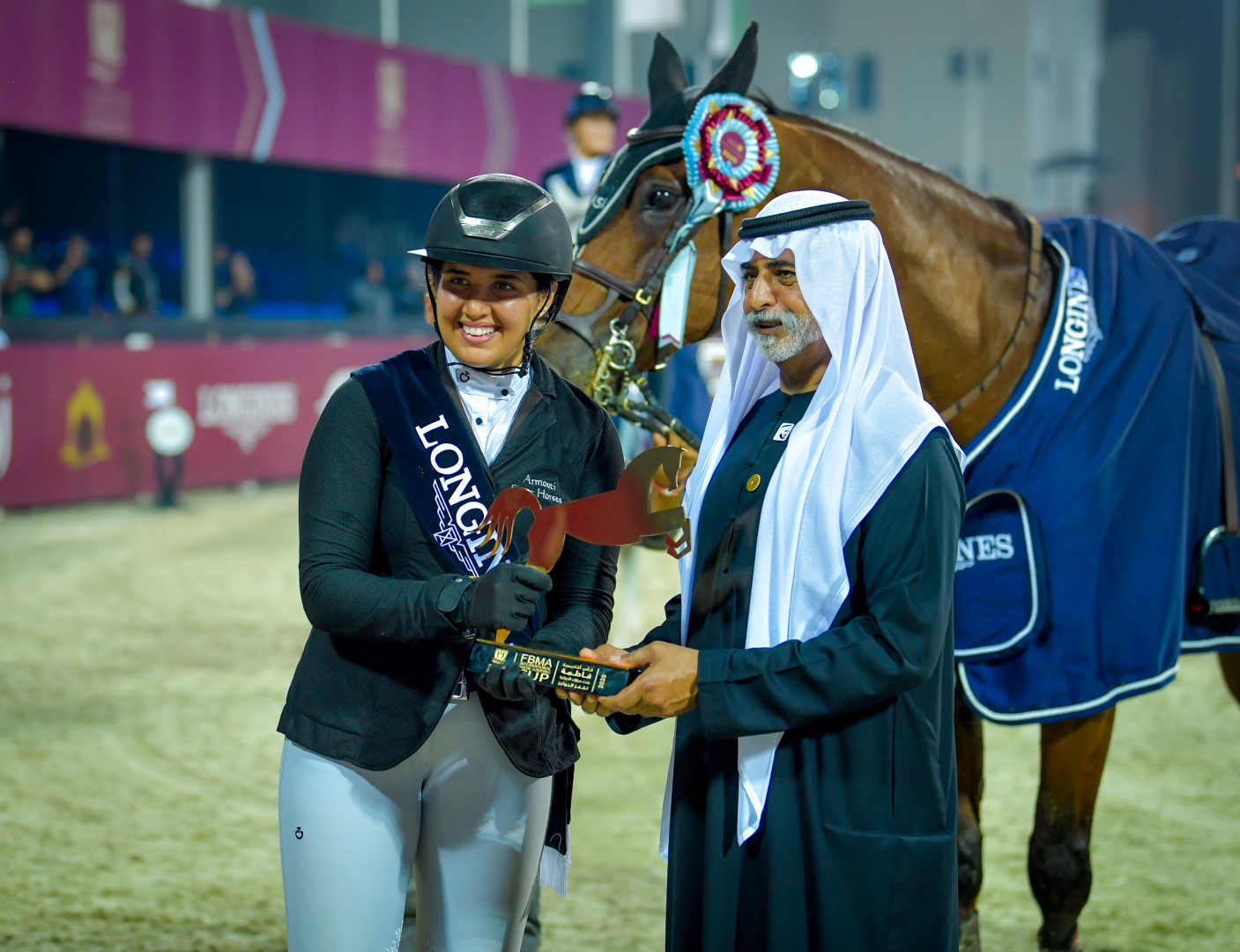 Sheikha Fatima Bint Hazza Bin Zayed Al Nahyan, Chairwoman of FBMA, and President of the Abu Dhabi and the Al Ain Ladies Club, said: “I would like to thank H.H. Sheikha Fatima bint Mubarak, Chairwoman of the General Women’s Union (GWU), President of the Supreme Council for Motherhood and Childhood, and Supreme Chairwoman of the Family Development Foundation (FDF) for her unlimited support to Emirati women, which has resulted in many successes for Emirati women in sports.”

“The 7th edition of the cup witnessed a great success in terms of participation and attendance, which supports FBMA’s mission of reinforcing the position of Abu Dhabi as a destination for international sports events and empowering Emirati women in sports,” she added.

Sheikha Shamsa bint Hasher Al Maktoum said: “I am very pleased to be present today at the 7th FBMA International Show Jumping Cup and I am very proud to see the talented Emirati female riders. I wish them all the best in their sports career, as they pave the way for becoming professional athletes in equestrian sports.”

Taking place at Al Forsan International Sports Resort, the final day of the cup featured six categories that target different groups of riders, including an additional category, which encourages novice talents to get involved in equestrian sports.

The third day of the cup kicked off at 9:30am with CSI young horses category, presented by Al Shiraa Stables. In the first category, Tina Lund from Denmark won the first place, Sara Hussein Saleh Al Armouti from Jordan won the second place, and Abdul Rahman Al Abdouli from the UAE won the third place.

The second category, CSI Youth category, presented by Etisalat, targeted young adults, who were competing with great enthusiasm, showcasing their equestrian skills to win the trophy. By the end of the second competition, Abdullah Alghamdi from KSA won the first place, Ayman Nasser Al Onays from Palestine won the second place, and Jack Ryan from Ireland won the third place.

FBMA presented a category that targets novice talents, which attracted 10 riders. Through this initiative, FBMA aims to inspire emerging talents to get involved in equestrian activities and be prepared to compete in highly-skilled categories in the future.

FBMA International Show Jumping Cup aims to inspire women, youth, Emirati nationals, and the whole UAE community to get involved in sports activities and cups, and take part in leading an active and healthy lifestyle.

Commenting on her win of the Grand prix, Sara Hussein Saleh Al Armouti from Jordan said: I am delighted to win the 2 star grand prix with the assistance of my horse Tokyo and I am honoured to have participated in the 7th FBMA International Show Jumping Cup.”

Members from the UAE community had a chance to enjoy 3 days full of a range of equestrian competitions, along with fantastic offerings from the Equestrian Village, including fun activities, food trucks serving food that satisfy all cravings, as well as lively music. The cup showcased highly-skilled national talents, which instils pride in every member of the UAE community.