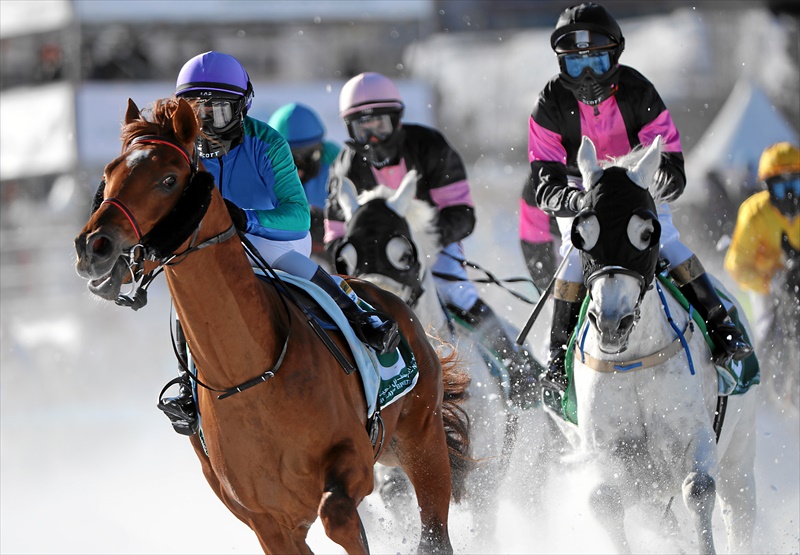 A fortnight ago on the opening day of the White Turf 2018 here on the ice tracks on the frozen St Moritz lake, van den Bos saddled a 1-2 with Dynamites and Athlete del Sol finishing in that order in the Sheikh Zayed Bin Sultan Al Nahyan Cup race series.

Dynamites, the 4-year-old chestnut colt by Nashwan Al Khalediya, owned by Landgoed Waterland, will once again start favourite in this Sunday’s HH Sheikha Fatima Bint Mubarak Ladies World Championship (IFAHR) race which will be run over a mile’s distance on the ice-snow track.

The biggest challenge for Dynamites is likely to come from Lahoob under Hungarian Csenge Sutak and Nil Aziz to be ridden by Belgian Anna van den Troost apart from the consistent performing Athlète del Sol to be ridden by Norway’s Vanessa Ryall.

Toutatix under Italian Valeria Toccolini is also expected to add to the challenge while the others in the fray are Lou Raynal, partnered by Swiss lady jockey Astrid Wullschleger- a former HH Sheikha Fatima Bint Mubarak Ladies World Champion and Nil Ashal to be ridden by Sweden’s Fabienne De Geer.

“We thank HH Sheikh Mansoor Bin Zayed Al Nahyan, Deputy Prime Minister of the UAE and Minister of Presidential Affair and Her Highness Sheikha Fatima Bint Mubarak, Chairwoman of the General Women’s Union, Supreme President of the Family Development Foundation (FDF) and Head of the Supreme Council for Motherhood and Childhood for supporting and giving the lady jockeys the opportunity to experience such different racing conditions.”

“It will once again be very exciting in the finale of White Turf 2018 on Sunday, with approximately 60cm thick ice sheet covering the lake of St. Moritz,” said Thomas C. Walther, President of White Turf.

“For the seven races today we are expecting 57 horses from six countries clearly underscores the internationality of the horseraces in St. Moritz. Things could hardly be more captivating for the starting line ups in all three disciplines”, he added.