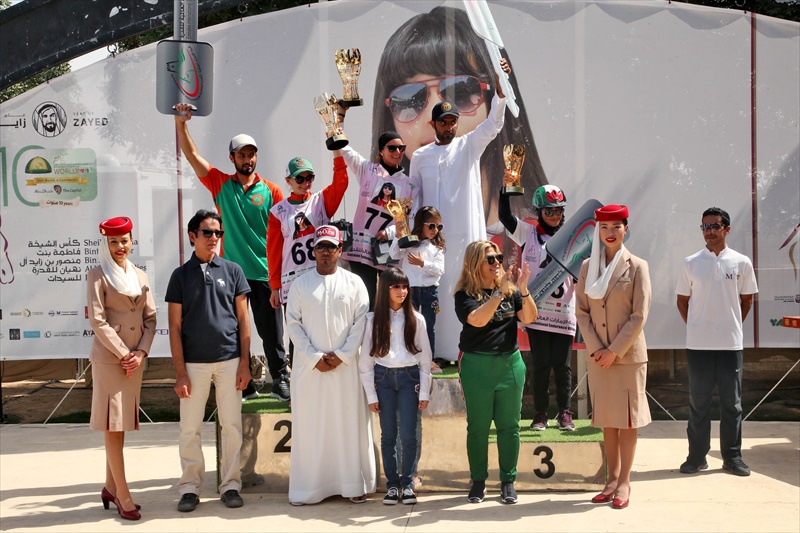 The UAE’s Afra Al Suwaidi on MM Bufa looked to be heading smoothly after she was leading in the second and third stages.

However going into the final loop of 16kms, it was Spelanzon on the 8-year-old bay gelding Altariq, who set the pace and moved from fourth place to the lead and finally won in a time of 3 hours 21 minutes and 02 seconds. She finished 18 seconds ahead of Italian Guilia Vigevani on Tudo Du Cambou while the UAE’s Maitha Alkaabi on Djarena finished third a further seven seconds later. Afra had to settle for 6th place.

Earlier in the morning 123 lady riders from the UAE and other countries around the world took part in the annual ride held under the directives of HH Sheikh Mansoor Bin Zayed Al Nahyan, Deputy Prime Minister and Minister of Presidential Affairs.

The top three lady riders won a car each while those who finished between 4th and 10th also received cash awards.

Meanwhile on the sidelines of the ride a lot of events were lined up for young girls and their families.

Ms. Sawaya said the ride provided the perfect opportunity to discover fresh talent particularly from the UAE lady riders and this would boost the UAE national ladies team which takes part in international endurance competitions.

“It was great to watch a large number of girls attend today’s ride and also many young girls take part in various competitions.

A team of French acrobats performed various tricks and the girls and their families enjoyed it. A number of female artistes taught girls the art of drawing, and special prizes were awarded to girls in the age category of 7-9 years,” Ms Sawaya said.