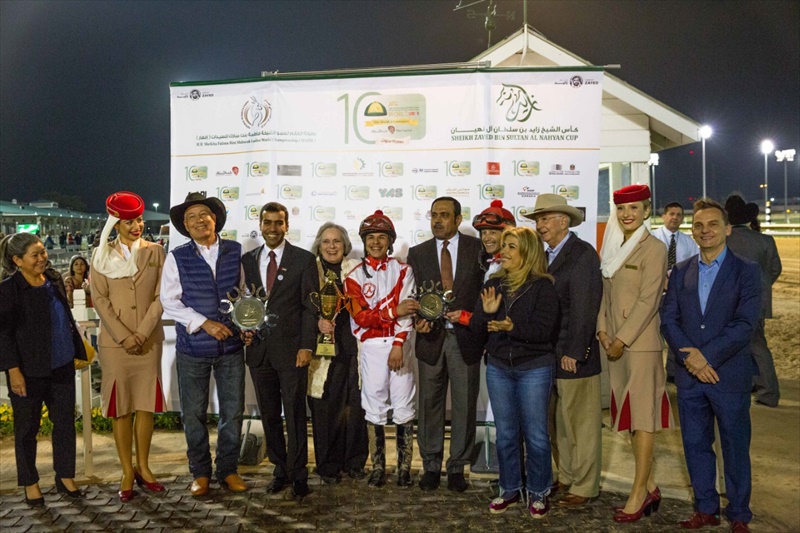 The Grade 1 race carrying a prize fund of US$ 48,500 and run over a distance of seven furlongs ended in a dead heat and even the photo could not separate stable mates Easter Man under Rodolfo Guerra and Quick Sand AA under Quincy Hamilton. The result was equally memorable for trainer Jerenesto Torrez and owners Joseph and Betty Gillis as Easter Man and Quick Sand AA are trained and owned by them respectively while the horse chasing the duo home- RB Nash under Keiber Coa- is also handled by Torrez.

In the Sheikh Zayed Bin Sultan Al Nahyan 100 years Cup (Grade 1) race, Quick Sand AA was caught in the early traffic even as RB Nash and Easter Man battled each other further up. With about a quarter of a mile to go, Easter Man under Guerra looked to hold the edge with RB Nash under Coa in pursuit. But Quick Sand AA under Hamilton came with a terrific run on the outside and caught Easter Man on the line. The photo-finish declared it as a dead heat between Eastern Man and Quick Sand AA while in third was RB Nash, completing a top three finish for trainer Torrez.

After posting a comfortable win on Uptown Sandy Girl, the winning jockey Tina Henriksson said, “This is like a dream come true, winning the HH Sheikha Fatima Ladies race. I am very excited and looking forward to participate in the final of the world championship to be held in November.”

HE Al Muhairi hailed the success of Saturday’s races and also the success of the HH Sheikh Mansoor Festival in spreading Purebred Arabian horse racing.

“We thank HH Sheikh Mansoor Bin Zayed Al Nahyan, Deputy Prime Minister of the UAE and Minister of Presidential Affairs and HH Sheikha Fatima Bint Mubarak, the Mother of the UAE for taking the UAE’s heritage sport to all parts of the world. It is a matter of pride for us to be here at these races,” the UAE envoy said.

Dr. Al Raisi said, “The National Archives is thankful to HH Sheikh Mansoor for giving us this opportunity to be part of this huge success story that the Festival is all about. We at National Archives are also marking our Golden Jubilee.”

Ms. Sawaya said, “This year the Festival is not only marking its 10th year but we are celebrating the Festival in the 100th year since the birth of Sheikh Zayed Bin Sultan Al Nahyan, who was a passionate supporter of Purebred Arabian racing.”

“We will be back in the US for the HH Sheikha Fatima Bint Mubarak International Awards and the US Darley Awards that will be held on April 7, 2018 at the Dolby Theatre in Hollywood. This will be followed by the third running of the HH Sheikha Fatima Bint Mubarak Darley Award Stakes- a US$100,000 Grade 1 Event at Santa Anita Park in Arcadia, California on April 8,” Ms. Sawaya said.

Stage set for the HH Sheikha Fatima Championship in Casablanca