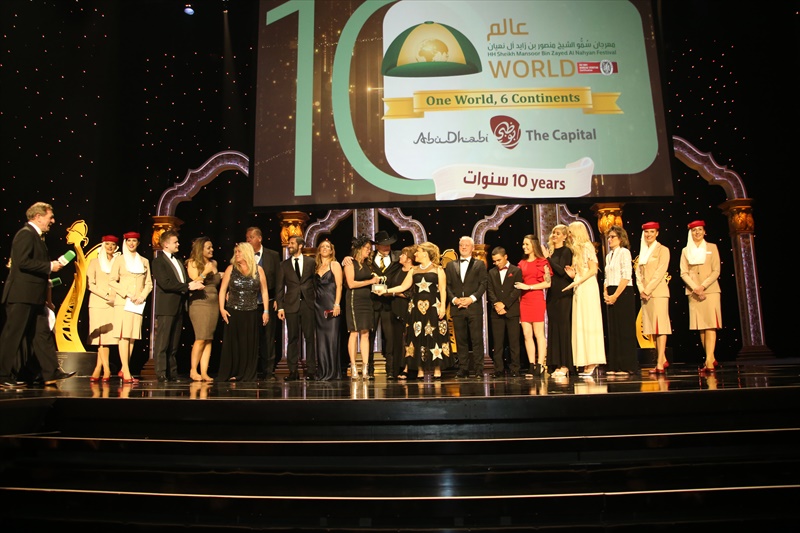 Powell’s Paddys Day once again hogged the limelight in the US Darley Awards after being voted Best Older Horse and yet another Horse of the Year Award at the dazzling event organized by the Arabian Racing Cup and supported by the HH Sheikh Mansoor Festival.

Scott Powell collected another double when Ivory Shores was named Best Older Mare in both the US Darleys as well as the HH Sheikha Fatima Bint Mubarak Darley Ladies International awards.

Despite being absent, breeder-owner couple of Betty J and Joseph A Gillis was named Best Breeder and Best Owner in the US Darley Awards and also were voted Best Breeder in the HH Sheikha Fatima Awards.

With decades of contribution to Arabian horse racing under her belt, Val Bunting of France was greeted with loud cheers as she was awarded the HH Sheikha Fatima Bint Mubarak Life-time Achievement Award while at the other end of the spectrum, 18-year-old Uruguayan Endurance rider received the Best Endurance Rider award.

The classy ceremony opened with HE Al Subose highlighting the role played by the Festival and by the Late Sheikh Zayed Bin Sultan Al Nahyan in building the UAE as well as promoting Arabian horses. Almost all speakers after that commended the role played by His Highness Sheikh Mansoor Bin Zayed Al Nahyan, Deputy Prime Minister of the UAE and Minister of Presidential Affairs and Her Highness Sheikha Fatima Bint Mubarak, Mother of the Emirates, President of the General Women’s Union, Supreme President of the Family Development Foundation, President of the Supreme Council for Motherhood and Childhood in the success of the Festival.

Commenting on Saturday’s HH Sheikha Fatima Bint Mubarak Darley International Awards Stakes $100,000 Grade 1 race at Santa Anita Park in Arcadia, California, Ms. Sawaya said, “It will be a big day for Arabian racing as Saturday is one of the biggest race-meetings at Santa Anita Park.”

“Two Grade 1 (Group 1) races – the $1 million Santa Anita Derby which is a Kentucky Derby prep race and the Santa Anita Oaks- will be supported by another Grade 2 and Grade 3 race with the HH Sheikha Fatima Bint Mubarak Darley International Awards Stakes being the final event in a card of 13 races,” she said.

A record crowd of over 40,000 is expected and all of them will get to see the racing ability of the Purebred Arabians in our race and this is a huge boost for all connected with Arabian racing,” she said.