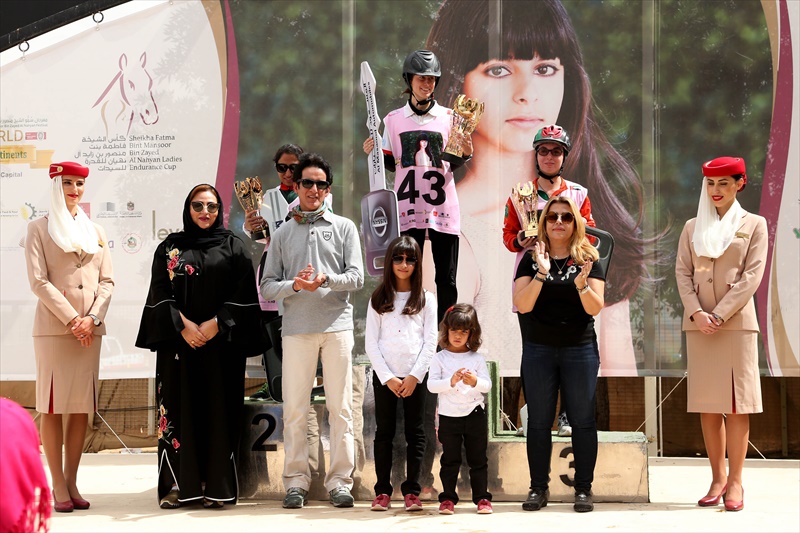 Riding 9-year-old chestnut gelding SM Jota Curado, Bastons prevailed in one of the most hotly contested ladies ride in which all the top five were in the running until the final minutes.

With 105 lady riders starting in this four stages race, Bastons did show her superiority as the rider representing Jumeirah Stables finished the first loop in third place and then took over to lead in each of the remaining three stages.

But the UAE’s Afnan Mohammed Abdulla on Instantaneo, representing Al Wathba Stables gave her a tough challenge and finished just six seconds behind the Argentine while Libyan lady rider Waad Nadim Bou Moghlbay on Patagonia Simon, who was second going into the final loop, finished fifth.

The top three lady riders won a car each while the other riders also got attractive awards for finishing at the top.

On the sidelines of the ride, it was a mini festival of fun and frolic as a team of entertainers from France delighted the large number of young girls. “HH Sheikha Fatma, HH Sheikh Mohammed, HH Sheikh Hamdan and HH Sheikha Latifa, children of HH Mansoor Bin Zayed Al Nahyan, UAE Deputy Prime Minister and Minister of Presidential Affairs attended the festivities and took part in the action.

The special fashion show which was staged for the first time at the ‘Wathba Land’ by professional mannequins and fashion models from both sexes.

All the games were specially prepared and brought from France for the Emirates International Endurance Village and HH Sheikha Fatma Bint Mansoor has selected=”true”=”true” the gifts that were drawn in a raffle for the children.”

Adnan Sultan, Director General of Abu Dhabi Equestrian Club, who attended the prize distribution along with Ms Sawaya and other representatives of sponsors, said it was a record number of riders for this ladies event.

“The race underlined the great attention of His Highness Sheikh Mansoor Bin Zayed Al Nahyan for this this sport from all technical, administrative and financial aspects and this put the Festival’s events at the top of the world’s equine map.

2016 set to be biggest yet for HH Sheikh Mansoor Festival