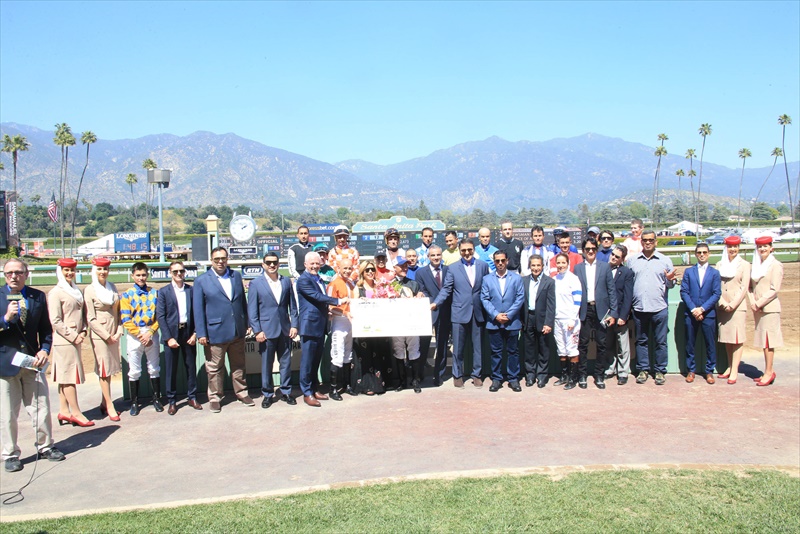 Just when he thought he ‘had ridden them all’, it was a first time experience for Triple Crown-winning jockey Victor Espinoza, thanks to the HH Sheikh Mansoor Bin Zayed Al Nahyan Global Arabian Horse Flat Racing Festival.

Ezpinoza, who became the first Triple Crown-winning jockey in 37 years when he guided Bob Baffert’s American Pharoah to victory in the 2015 Belmont Stakes, contested in his first ever race on a Purebred Arabian horse and emerged victorious.

It was a pairing of two stars-Paddys Day just after winning yet another pair of US Darley Awards the previous night and the man with over 3200 wins –Espinoza. And they obliged as Espinoza and Paddys Day demolished their 11 other rivals in the Grade I, $100,000 HH Sheikha Fatima Bint Mubarak Darley Award Stakes at Santa Anita race course on Saturday.

The Scott Powell-trained Paddys Day finished ahead of Easter Man under Edwin Maldonado while in third place was Sand Victor under Hugo Herrera.

“In 20 to 30 years I thought I had ridden them all but this was my first ever experience with an Arabian horse. He did not give up just like a thoroughbred horse; it was just that the pace was a bit slower,” Espinoza said.

“This horse was full of run going into the far turn; we just had to find a way through. It’s an honor to be a part of this race.”

It was the second running of the Grade I, $100,000 HH Sheikha Fatima Bint Mubarak Darley Award Stakes and also a huge relief for trainer Scott Powell as Paddys Day was beaten by Thess Is Awesome in a shock win last year when the Arabian race made its debut at Santa Anita.

“We thought we could win this race last year and we finished second, so this is really sweet. He definitely put it all together today,” said Scott who was named Best Trainer for 2016 in the Darley US Awards held on Friday night while Paddys Day scooped the Older Horse and Horse of the Year Award for 2016.

“This is exciting, I’ve been praying since the race was over to get him back home,” said Smith. “He had so much turbulence in the race, he didn’t need any in the air,” he said in reference to the rough start Arrogate was able to overcome in Dubai.

“We greatly appreciate what the HH Sheikh Mansoor Festival is doing for PDJF,” said Smith.

Later Espinoza also hailed the move. “It’s an honor to ride this race today. The Arabian association and Santa Anita gave a big check ($150,000) to the injured riders (PDJF) earlier today, so that was great,” he said after winning on Paddys Day.

The County of Los Angeles presented a memento of appreciation to HH Sheikh Fatima Bint Mubarak, H.H. Sheikha Fatima Bint Mubarak, Chairwoman of the General Women’s Union, Supreme Chairwoman of the Family Development Foundation and President of the Supreme Council for Motherhood and Childhood which was received by HE Subose, HE Al Suwaidi and Ms Sawaya.

The Festival’s Hat and Dress competition, being held for the second year, was a big hit with nearly 50 entries and the winners received attractive Prizes.