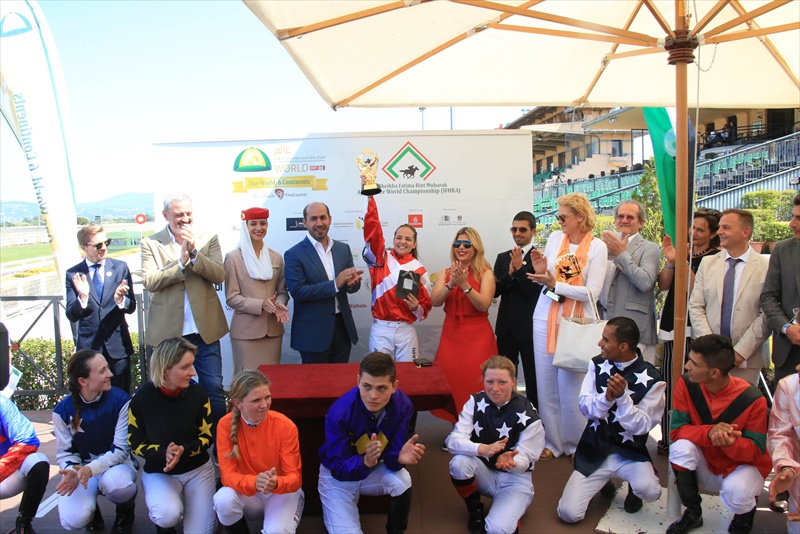 Metrag got back to winning ways with a solid run in the Listed Sheikh Zayed Bin Sultan Al Nahyan Cup while Italian Guilia Coccia and Hungarian Alexandria Bihari booked their berths in the finals of the HH Sheikha Fatima Bint Mubarak Ladies and Apprentice world championships respectively.

The three races were run as part of the ‘Abu Dhabi Day’ race meeting at the Capanelle race course in Rome on Sunday, June 4, 2017 under the umbrella of the HH Sheikh Mansoor Bin Zayed Al Nahyan Global Arabian Horse Flat Racing Festival.

The holiday crowd at the Cepenelle race track was served some exciting racing by the Purebred Arabians with Metrag, the five-year-old son of Amer, under Qatari jockey Faleh Bughenaim, winning the Euros 35,000 Sheikh Zayed Bin Sultan Al Nahyan Listed Cup while two lady jockeys from Italy made it a 1-2 in the HH Sheikha Fatima Bint Mubarak Ladies World Championship race.

The Thomas Fourcy-trained Metrag had finished 7th to stablemate Khataab in his last run in the Festival’s Sheikh Zayed Cup in Toulouse on April 22 this year, but on Sunday lived up to his favourite tag with a fluent run over the 2400-metre distance.

Yenka under Rosario Mangione did most of the running while Bughenaim kept Metrag just off the pace and with about two furlongs to go the Al Shaqab runner made his move. It ended in a 4-length win for Metrag with the Gunter Richter-trained Ramiz Al Aziz under Mauro Manueddu making a late run to finish second, ahead of Nil Aziz under Carlo Fiocchi. The winning time was 2:45.24.

It was a second win in four starts for the Amer son, his first coming in Casablance in a Group 3 race last year which was followed by a 9th place finish in the Group 1 Emir’s Sword in Doha in February this year and then the 7th place run in Toulouse in April.

Alexander Bihari, the Hungarian lady jockey used to be a regular in the Festival’s races but a rift in her National Federation had left her out of racing for nearly two years.

That issue was resolved just last month and announced at the Festival’s World Arabian Horse Racing Conference in Morocco. Sunday’s race was her debut as an Apprentice jockey and the 24-year-old Bihari grabbed the opportunity to win the HH Sheikha Fatima Bint Mubarak Apprentice World Championship race on Loskhar. Bihari and Loskhar demolished the field to win by over five lengths in the Euros 20,000 race that was run over 1700 metres.

Bihari, who has now qualified to race in the HH Sheikha Fatima Bint Mubarak Apprentice World Championship final in November, thanked the Festival for supporting her during her two-year tussle with a section of the Hungarian racing body.

“This is like a re-birth for me. My horse was all over the place but at the end we managed to get into a steady pace and the win is a great moment for me,” said Bihari after her 26th career win in 301 starts.

Guilia Coccia on Sedilesu came up with a searing run in the final furlong to push Debora Fioretti on Tabasco into second place while Ireland’s Jeannie Cook on Triade finished third. “I was a late entrant and I am so happy to qualify for the final. That is a great event in November and now I hope I can carry my country’s flag on the big stage with a good finish,” said Coccia.

HE Saqr Nasser Al Raisi, UAE Ambassador to Italy, Bosnia and Herzegovina, Macedonia and San Marino, and the Permanent Representative of the State to the Food and Agriculture Organization of the United Nations (FAO) along with Ms Lara Sawaya, Executive Director of the HH Sheikh Mansoor Bin Zayed Al Nahyan Global Arabian Horse Flat Racing Festival, Chairperson of Int’l Federation of Horse Racing Academies (IFHRA) and Chairperson of Ladies & Apprentice Racing Committees in the International Federation of Arabian Horse Racing Authorities (IFAHR) and other sponsors’ representatives and Italian racing officials, gave away the trophies.

HE Al Raisi and Ms Sawaya conveyed their greetings to the UAE leadership on the advent of the Holy Month of Ramadan.