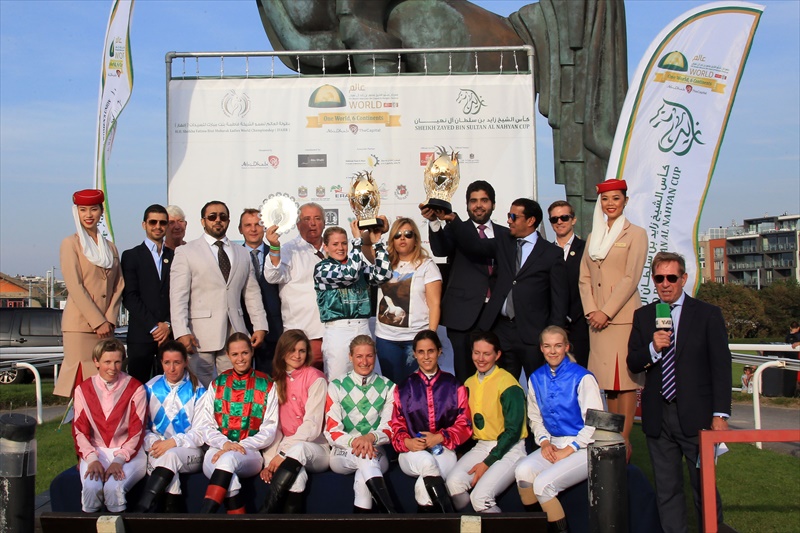 The Wellington racecourse in the Belgian city of Ostend turned out to be a happy hunting ground for Yas Horse Racing management, the horse racing arm of HH Sheikh Mansoor Bin Zayed Al Nahyan, Deputy PM of the UAE and Minister of Presidential Affairs, on Monday, August 14, 2017.

In the two races organized under the umbrella of the HH Sheikh Mansoor Bin Zayed Al Nahyan Global Arabian Horse Racing Festival, Naziq under Richard Mullen and Mirna under Rosie Jessop, both horses owned by Yas, won their respective races in front of a large band of fans at the Wellington racecourse.

The Sheikh Zayed Bin Sultan Al Nahyan Cup Group 3 race run over 1800 metres and carrying a prize fund of Euros 35,000 had attracted a small field but it turned out into an exciting contest. Richard Mullen, who is also one of the jockey Ambassadors for the HH Sheikh Mansoor Bin Zayed Al Nahyan Global Arabian Horse Racing Festival, steered Naziq, a 5-year-old mare to a great win in the Group 3 event.

Mullen on the Elizabeth JF Bernard-trained Naziq was challenged by the Alban de Mieulle-trained First Division General under Jean-Baptiste Hamel but the latter was strong enough to win by 1.25 lengths in a time of 2:12.57. Al Mounteze Monlau under Roberto-Carlos Montenegro ran into third place.

Mullen heaped praise on Naziq, a mare sired by Mahabb and also bred at the breeding operations of HH Sheikh Mansoor for Monday’s win. “Naziq is a great horse, put in a lot of effort in the final stages and helped stay ahead,” said the champion jockey of the UAE.

Trainer Elizabeth Jean-Francois Bernard said, “Naziq is back to the form that he had been in previously which had helped her win Qatar Arabian Trophy des Juments, a Group 1 race held last year in Chantilly France.”

The second success for Yas and for HH Sheikh Mansoor came when another Mahabb mare, 5-year-old Mirna finally tasted victory and this time in the Ostend leg of the HH Sheikha Fatima Bint Mubarak Ladies World Championship (IFAHR) race.

Mirna, which had come second in last year’s HH Sheikha Fatima Bint Mubarak Apprentice World Championship (IFAHR) race at the Tarbes racecourse in, Pau, France, was given a superb ride by one of the two professional lady jockeys in the 10-horse field. 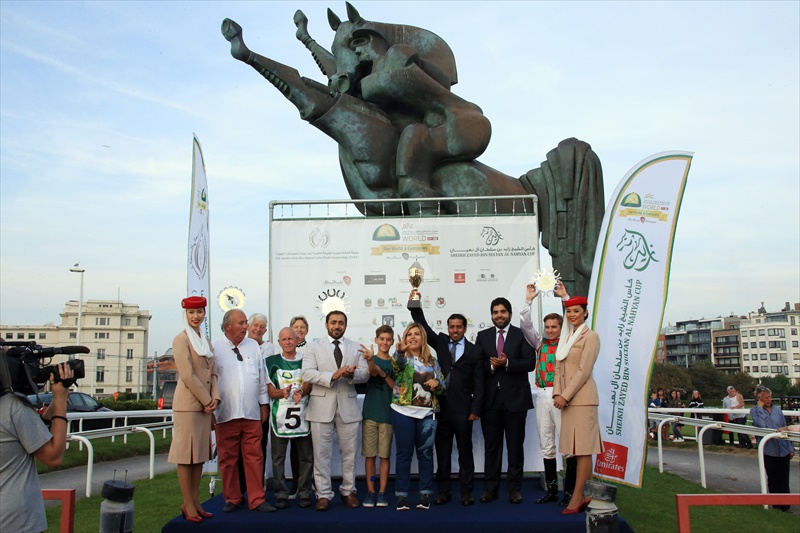 The UK’s Rosie Jessop seemed to finally bring out the best from the Mahabb mare, trained by Didier Guillemin, to make it a memorable day for HH Sheikh Mansoor.

Jessop, who will now be part of the starting line-up in November in Abu Dhabi to contest the HH Sheikha Fatima Bint Mubarak Ladies World Championship race, said she was elated with the victory.

“I have to give full credit to my horse Mirna for that. She was the best today. I am looking forward to the Abu Dhabi final,” said Jessop, who rode Arabians for over two years during a stint in Bahrain and now works for Sir Marl Prescott.

“The HH Sheikh Mansoor Festival has gained international fame in the international arena, including in Belgium, and has played a positive role in the return of interest Purebred Arabian horses in Europe and the rest of the world,” he said.

Ms. Sawaya congratulated HH Sheikh Mansoor on the double success of his horses and also hailed Richard Mullen, the Festival’s jockey’s Ambassador for his victory.

“This race was the second leg of the Sheikh Zayed Cup European Triple Crown. The first was held in Toulouse and the next and final leg of the three race series will be in Poland on August 20,” she added.

Ms. Sawaya also praised the huge crowd that filled the Wellington race course, which was estimated at more than 10,000 spectators, and the victory of the Van Dyck in the ponies’ race. Van Dyck will represent Belgium in the HH Sheikha Lateefa Bint Mansoor bin Zayed Al Nahyan International Championship for the Pony horses in November in Abu Dhabi.

Gulfnews.com : Series of races to be held for lady amateur jockeys

Ten cars on offer for two endurance rides over weekend