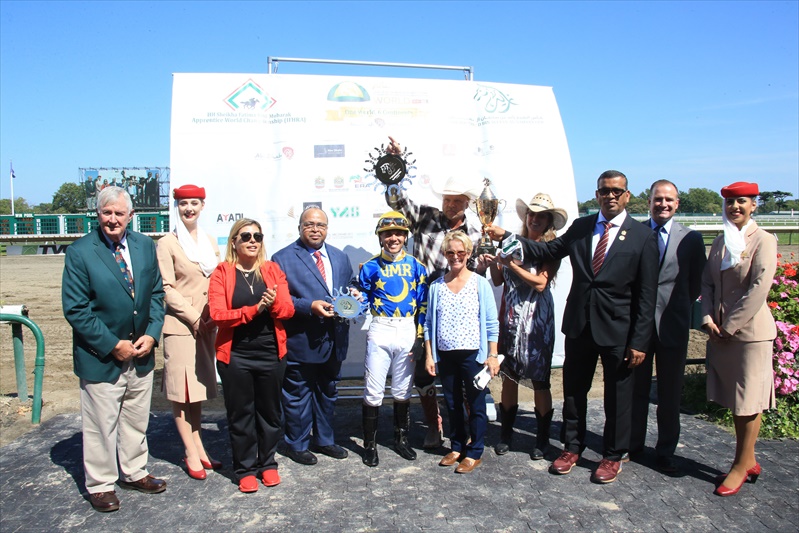 Thanks to the HH Sheikh Mansoor Bin Zayed Al Nahyan Global Arabian Horse Flat Racing Festival,Monday, September 4, 2017 will go down in the annals of US horse racing as a historic day on two fronts- Purebred Arabian horses made their debut at the Monmouth Park and more importantly they raced ‘lasix-free’ for the first time in a US race meeting.

The HH Sheikh Mansoor Bin Zayed Al Nahyan Global Arabian Horse Flat Racing Festival had laid down that its races in the US will be ‘lasix-free’ and for the first time ever Purebred Arabian racing on Monday showed the way competing without the use of Lasix-the anti-bleeding medication which is used in the US but banned in many other racing countries.

Two-time Arabian Horse of the Year Paddys Day was also bidding to win his third consecutive Sheikh Zayed Bin Sultan Al Nahyan Cup US Triple Jewel which includes a US $ 150,000 bonus for earning the highest points after three Sheikh Zayed Cup races in 2017.

Scott Powell was strongly double-handed as Ivory Shores had just on Saturday won the Grade 1 Buzz Brauninger Arabian Distaff Handicap and returned to action two days later. Ivory Shores under Kevin Mendez and Thess Is Awesome under Chris DeCarlo exchanged the early lead but soon Coa brought Paddys Day into the contest and after that there was only one winner.

Cheered home by the large crowd, the champion Paddys Day romped home with more than five lengths to spare from second –placed Quick and Rich under Carlos Hernandez. Thess Is Awesome finished third a further 10 lengths behind.

“The race set up perfectly for us,” said winning rider Keiber Coa. “They were going slower than I thought they were going to go. He’s a kind of horse where you have to get after him. You got to get into him to wake him up and tell him it’s time to go. He’s a really classy horse.”

Coa said that he will be accompanying Paddys Day for his trip to the UAE later this year.

The 6-year-old son of Burning Sand out of the Virgule Al Maury mare AK Loretta has now won 22 of his 33 career starts, extending his all-time earnings record for an American Arabian Horse to $472,786.

“That is a great way to win his third US Triple Jewel. This year he won all the three legs and showed what a champion he is. We are very happy with his form and hopefully he will do better in the UAE this time,” said Scott Powell, the winning trainer.

When Butch Cassidy LZP became a late withdrawal in the HH Sheikha Fatima Bint Mubarak Apprentice World Championship race, Sweden’s Ulrika Holmquist who was drawn to ride it was devastated. But, to her good luck, Valenzuela Moncada did not turn up so she got the ride on Kao Maloan SWA.

The 24-year-old veterinary student seized that opportunity and came up with a blistering finish on the Ken Danyluk-trained 4-year-old Kaolino son to win the US$ 20,000 HH Sheikha Fatima Bint Mubarak Apprentice World Championship race and qualify for the final on November 10.

Germany’s Esther Weissmeier on Jimdandy Totherehessq led for most part of the race and had mustered a good lead heading home but Holmquist on Kao Maloan SWA began a searing run and charged down the outside to collar the leader and win the 6-furlong contest in 1:19.11.

The Stockholm-based second-year veterinary student said, “I was devastated that my horse got scratched but when I got to know I was riding I was very happy that my trip was not going waste. This is such a great opportunity by the HH Sheikh Mansoor Festival for us Apprentice riders and it was also my first start in this series.”

“The trainer told me to keep him off the pace and he sure had a lot of pace in the final furlong. I have never been to the UAE and am looking forward to the November 10 final,” said Holmquist after her victory.

Ms. Lara Sawaya, Executive Director of the HH Sheikh Mansoor Bin Zayed Al Nahyan Global Arabian Horse Flat Racing Festival, Chairperson of the International Federation of Horse Racing Academies (IFHRA) and Chairperson of Ladies & Apprentice Racing Committees in the International Federation of Arabian Horse Racing Authorities (IFAHR) and General Manager of Wathba Stallions along with Ali Moosa Al Khameiri, Hall of Fame jockey Julie Krone, who is an ambassador of the HH Sheikh Mansoor Festival, and other UAE and US officials attended the prize distribution and gave away the trophies.

“We are very happy that today the first-ever race without Lasix has been run in the US and the Festival has been pushing for this. We are hoping that this will change this practice here in the US and ensure a ‘drug-free’ horse while racing, “ said Ms. Sawaya.

“Another historic event today has been the debut of Purebred Arabian Horses and the large crowd certainly enjoyed and participated in the two races of the Festival,” she added.

Congratulating the Swedish Apprentice Ulrika Holmquist and the connections of Paddys Day, Ms. Sawaya said, “It is a great achievement for Paddys Day to win a third Sheikh Zayed Cup Triple Jewel.”

“From next year we will be doing away with the Triple Jewel and introducing new competitions to mark the 100th year of the birth anniversary of the late Sheikh Zayed Bin Sultan Al Nahyan, Founder of the UAE and the architect of UAE’s promotion of Purebred Arabian horses and also mark ten years of HH Sheikh Mansoor Festival,” Ms. Sawaya said.