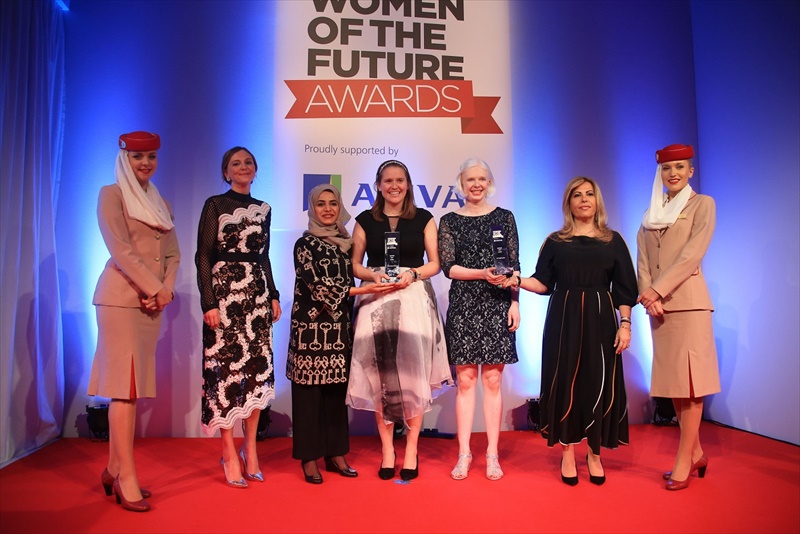 The 12th annual Women of the Future Awards took place at London’s Hilton Park Lane Hotel on Wednesday, 15 November 2017 and yielded a record number of nominations from a vast spectrum of careers and professions across 14 categories, including the Sport Award, which for the second consecutive year was sponsored by HH Sheikh Mansoor Bin Zayed Al Nahyan Global Arabian Horse Flat Racing Festival.

Wathba Stallions, Chairperson of the International Federation of Horse Racing Academies (IFHRA) and Chairperson of Ladies & Apprentice Racing Committees in the International Federation of Arabian Horse Racing Authorities (IFAHR) together with principal guest Rawdha Alotaiba, Deputy Head of Mission at the UAE Embassy in London attended the ceremony to announce the result, which for the first time since the award’s inception, saw two winners crowned.

Taking to the stage to congratulate the winner, Rawdha Alotaiba delivered an inspirational speech to audience applause, which highlighted the UAE’s progressive and inclusive approach towards supporting and encouraging female success in all career disciplines, including sport, for which she praised the Festival’s global horseracing activities and its sponsorship of the Women of the Future Awards.

Lara Sawaya commented, “The quality of this year’s shortlist is the highest it’s ever been, and we are so proud to see horseracing’s Page Fuller, a young jockey who has overcome so many physical and emotional obstacles to return to racing following injury, recognised and celebrated for her career success.

‘We commend the judges’ selections in Sarah and Alexandra, two incredible women who continue to inspire and benefit the lives of others through sport. These core values reflect the vision and objectives of HH Sheikh Mansoor Bin Zayed Al Nahyan, Deputy Prime Minister of the UAE and Minister of Presidential Affairs and Her Highness Sheikha Fatima Bint Mubarak, Chairwoman of the General Women’s Union, Supreme President of the Family Development Foundation (FDF) and Head of the Supreme Council for Motherhood and Childhood and we are delighted to reinforce and promote the principles of the Festival by supporting the Awards.”