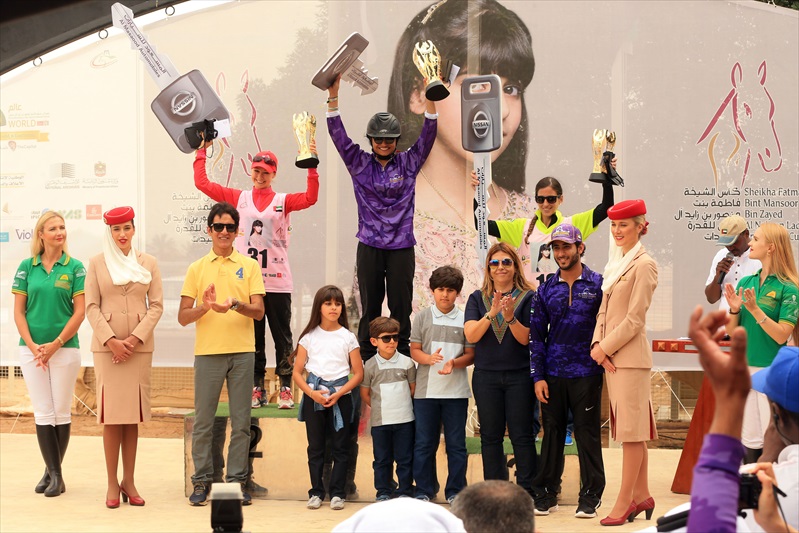 HH Sheikha Mahra Bint Mohammed Bin Rashid Al Maktoum headed the 108 riders who started the race under favourable weather conditions at the beautiful venue which was decked up with a lot of side activities at the ‘Arts Creative Land’ for young kids and especially girls.

Nouf and RR Erebus covered the distance in 3 hours, 26 minutes and 34 seconds at an average speed of 29.04kmph. Polish rider Kamila Anita Karet was second on Thaalob and in third was Argentine Sabrina Mendiz on H C E Magfalcada Su.

The riders managed to take advantage of the relatively cool weather conditions in the early morning and put their horses on top gear to finish the first loop in 1:22:22 seconds at an average speed of 40km/ hour. Aisha Darweesh showed the way and close on her heels was Mira Jassem Al Ansari with Kart in third.

But, the winner began to make steady progress until she hit the front in the concluding stage and from then on went on to win.

Trainer Abdulla Mohammed Rashid Al Naqbi was delighted and said: “I would like to dedicate the victory to HH Sheikh Hazza Bin Zayed Al Nahyan, National Security Advisor and Deputy Chairman of the Abu Dhabi Executive Council, the patron of the Al Maghaweer Stables.”

“RR Erebus is a good horse and easy to train. He has finished third in Al Dhafra Endurance Ride at the beginning of the season and hopefully he will continue to impress during the rest of the season,” he said.

Meanwhile, Nouf, the winner commented: “I’m truly happy. The race was tough and the competition was too strong. The third loop was particularly very difficult.”

Nouf thanked her trainer for his useful directives which have helped her to win the race.

“The children’s Art Creativity Land was great and the children have enjoyed the moments and the events and the precious prizes which were presented to them,” she said.

“Sixteen journalists have come from Switzerland to attend the race on invitation from the Festival under the directives of HH Sheikh Mansoor Bin Zayed Al Nahyan, UAE Deputy Prime Minister and Minister of Presidential Affairs.

“I’m delighted to see Nouf winning. She is one riders of the Festival’s endurance team,” she said.