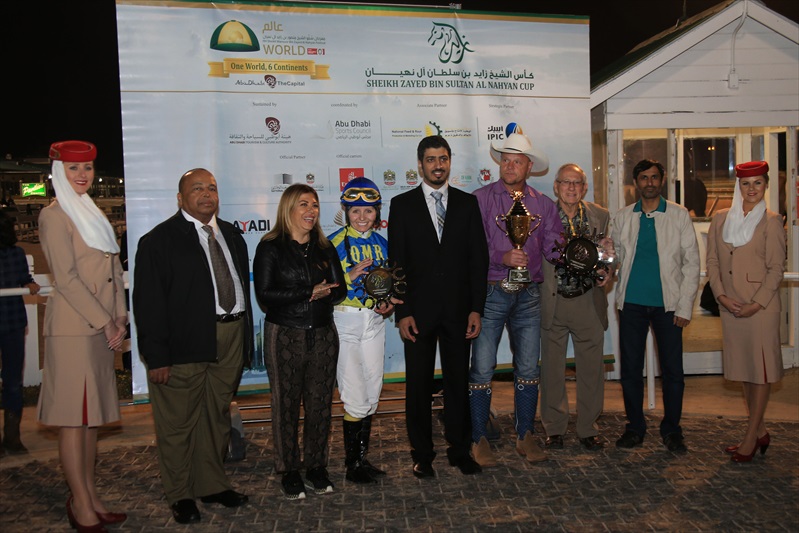 Paddys Day, the Scott Powel-trained horse went one better than last year when he had finished second to Burning Fleet. With this winning start Paddys Day will now have the Sheikh Zayed Bin Sultan Al Nahyan Cup – Emerald Jewel in Pleasanton in July and the third and final Sheikh Zayed Bin Sultan Al Nahyan Cup – Diamond Jewel race in Los Alamitos in September along with the bonus of US$ 150,000 on his radar.

Purcell had Paddys Day in control of the race and though Randy Nunley’s F Sixteen (Carol Cedeno up) made a late bid and overtook the Jerenesto Torrez-trained Easter Man, that final burst was not enough.

“He is an amazing horse,” said Scott Powell. “We are so proud of him.”

There was a fifteen-minute delay due to a power failure in the placing judge’s stand. The horses were backed out of the gate, but Purcell said it made no difference to her stallion.

“It was tough, but he held his composure,” said Purcell. “He’s just an amazing horse and will go all the way this year.”

In the all-ladies line-up, Delphine Garcia Dubois of France set the pace on favourite Jewell AA but Royal Richess under Belgian Sara Vermeersch came up with a driving finish to win the HH Sheikha Fatima Bint Mubarak Ladies World Championship IFAHR Cup for trainer Lynn Ashby. In fact it was a perfect 1-2 finish for Ashby as Our Princess under Briton Joanna Mason overtook Jewell AA to take second place ahead of the odds-on-favourite.

Ashby hailed the display by the Belgian jockey who was registering her fourth career success. “We love coming to Sam Houston for this race,” said Ashby. “We drew a great rider; she listened and read the form on this mare. She knew what to do; it was awesome,” said Ashby.

Ms Lara Sawaya said, “It was a perfect night for Purebred Arabian horse racing. Both the races provided exciting fare for the fans here and some of the top Purebred Arabians racing in the US were in competition.”

“The HH Sheikh Mansoor bin Zayed Al Nahyan Global Arabian Horse Flat Racing Festival will be back in the US next month when the prestigious HH Sheikha Fatima Bint Mubarak Awards and the US Darley Awards ceremony will be held at the Dolby Theatre in Hollywood style,” Ms Sawaya added.

“This year we will also be introducing the HH Sheikha Bint Mubarak Darley Awards Stakes, a Grade 1 race at Santa Anita Park in Los Angeles on the sidelines of the Awards,” she added.

For the fifth year in a row, the Sam Houston Race Park presented family-friendly exotic animal racing alongside the two Purebred Arabian races staged by the Festival. This year, the action included Camel and Ostrich races and nearly 25,000 fans were rooting for their favorite Camel and Ostrich apart from the horses, as they raced a distance of approximately 100 yards.