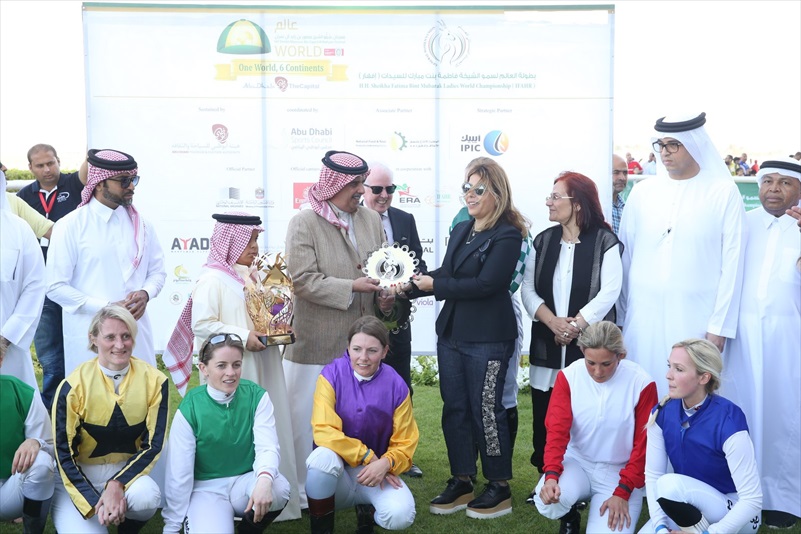 Alan Smith and Alice Mills made it a grand triumph for Great Britain with their 5-year-old Kuheilan Al Adiyat , but not before an exciting tussle for supremacy in the final stages.

Mills on the son of Al Hamdany staved off the challenge of Kra Yaan under Norway’s Catherine Fortune to win by the narrowest of margins and book a place in the November final of the HH Sheikha Fatima Bint Mubarak Ladies World Championship.

Trainer Smith had won this race with Mlolshan under Danish lady jockey Sabina Gammelgaard last year and Mlolshan could only earn a fourth place finish on Friday under Germany’s Laura Giesgen.

Al Rabda under Denmark’s Rikke Sorensen finished third even as Mills on Kuheilan Al Adiyat completed the 7-furlong race in 1:39:37.

It was great return after a short rest for the Briton who scored a thrilling win. “Had an absolutely brilliant race and got up to win in a photo. It is the horse’s first win in two starts and he was great,” she said.

“I’ve been a bit quiet of late as I had to take a few weeks off to recover from my couple of heavy falls. No harm done was just feeling the effects,” Mills, also a jump jockey, had said before the race.

“When I was asked to represent Great Britain in the HH Sheikha Fatima Bint Mubarak Ladies World Championship race I was pretty excited. Now this win has made it a memorable trip to Bahrain,” the winner said.

Sawaya hailed the close cooperation with the Royal Equestrian and Endurance racing Association in Bahrain in hosting the championship which will have positive effects on the overall performance and standards of lady jockeys. She also thanked Sheikh Mohammed Bin Essa Al Khalifa and Sheikh Faisal Bin Rashid Al Khalifa for the brilliant organization, pointing out that Bahrain is capable of organising and hosting mega events.

“Preparations have been completed for the Festival-supported US Darley Awards which will be different this year at all levels to underline the attention of HH Sheikha Fatima Bint Mubarak of the woman around the globe. The awards play vital role in encouraging woman to be part of the racing fraternity. The HH Sheikha Fatima Award for the best woman has become a turning point not only at the Darley Awards but has drawn the future outlook of women in racing career.

“The HH Sheikha Fatima Award will coincide with the 28th anniversary of the American Darley Award at the Dolby Theatre in Los Angles with 250 guests including 60 ladies representing 60 countries among those nominated for the Awards,” she said.