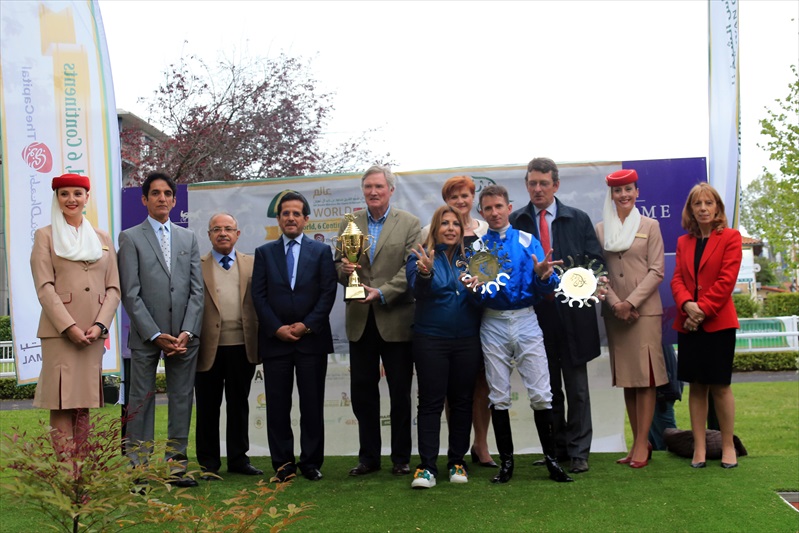 Friday’s Sheikh Zayed Bin Sultan Al Nahyan Cup (Prix De Carthage – Hannibal) Group 2 was also the first leg of the three-race European Triple Crown in the Festival’s Sheikh Zayed Cup Series and it was Muraaqib which started as the favourite.

The 4-year-old chestnut son of Munjiz coming to Toulouse on the back of two Group One races in 2015 was spot on under jockey Francois-Xavier Bertras to register a smart win ahead of the Karin van den Bos runner Lighting Bolt under Loritz Mendzibal. The 2014 and 2015 winners of this race finished third and fourth respectively when Sir Bani Yas under Jean-Bernard Eyquem and Ziyadd under Jean-Baptiste Hamel finished in that order.

In the HH Sheikha Fatima Bint Mubarak Ladies World Championship IFAHR race, the French fans were in for a shock when their countrywoman Lara Le Geay on the favourite Taajer got beaten by Laft Nethar under Sweden’s Yasmine Nilsson. The winner is from Thomas Fourcy’s yard and Naft Lethar’s win also deprived Muraaqib’s trainer Francois Rohaut a memorable Festival double.

The 22-year-old Nilsson, who works as a checkout girl in a Swedish supermarket, was jubilant after posting her 12 career wins in just over a 100 starts. “This is simply great to win and now I will be participating in the Ladies Championship finale in November in Abu Dhabi,” she said.

Valentin, winner of the Sheikh Zayed Cup in Berlin in 2015 and ridden by the experienced Italian Elisabetta Marcialis finished third ahead of last year’s winner Shen under Solange Gourdain.

“France has a long and outstanding history of Purebred Arabian horses and the HH Sheikh Mansoor Bin Zayed Al Nahyan Global Arabian Horse Flat Racing Festival has a strong presence in this country. These races further strengthen the strong ties between the UAE and France,” the UAE envoy Al Khyeli said.

Ms Sawaya said: “It has been a great start to this year’s Sheikh Zayed Bin Sultan Al Nahyan European Triple Crown race here in Toulouse. We congratulate HH Sheikh Hamdan on the success of Muraaqib and we hope the horse will take part in the remaining two legs.”

“Today’s winner in the HH Sheikha Fatima Bint Mubarak Ladies World Championship IFAHR race is a shopping assistant in Sweden and her success reflects the opportunities this race series provides to lady jockeys around the world. All this is thanks to HH Sheikh Mansoor bin Zayed Al Nahyan, UAE Deputy Prime Minister and Minister of Presidential Affairs and HH Sheikh Fatima Bint Mubarak, Her Highness Sheikha Fatima Bint Mubarak, Chairwoman of the General Women’s Union, Supreme President of the Family Development Foundation (FDF) and Head of the Supreme Council for Motherhood and Childhood and Mother of the Nation,” she said.

Nine in fray for Wathba Stallions Handicap Stakes in Chelmsford