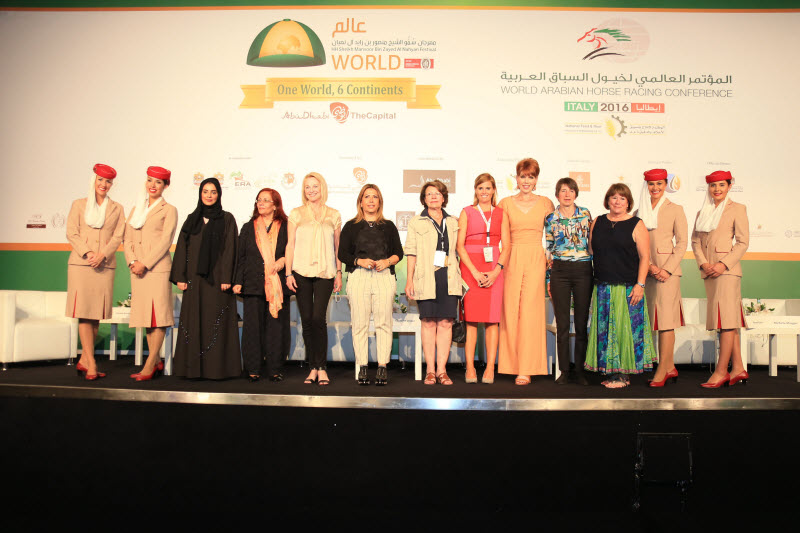 While Thursday’s opening session on Breeding of Purebred Arabians zeroed in on ‘compatibility’ as the key word in finding a match between mares and stallions; the afternoon trainers and owners agreed that there was no single framework to success in racing and training. Later in the evening, the third session was on the crucial subject of Weight Loss Control for jockeys and the Festival –sponsored research by the Liverpool John Moores University unveiled an industry-specific nutritional education package for jockeys.

Dr. Daglish stressed on the need for a good mare in Arabian breeding while Dr. Daneri said it was important to study what the stallion has produced before choosing one and see if those qualities work for the particular mare.Ilka Gansera-Leveque said it was all about compatibility when choosing  stallions for mares while Kathy Smoke said a lot of homework has to be done and one has to look for those that were genetically strong.

Landuci said one had to be patient enough as foals take a long time before becoming a winner while Dunnet stressed on the nutritional factor which was not a staple one as Arabian horses have different metabolism rates.

Moroccan Sedrati urged for an International Stud Book to make Arabian breeding universal and highlighted the benefits of Artificial Insemination and Embryo Transfers.

Hungary’s Csaba Pribenszky unveiled his study on Gene Preservation and said it was a remarkable tool for breeding. “Sperm Cryopreservation procedures are well established since decades and can be used in Arabian breeding. PTAT – Pressure Triggered Activation of Tolerance technology ensures better preservation of the genetic material, improves semen quality, increases spermatozoa survival and supports cell function. PTAT treatment is an ‘add-on’ technology, inserted into the standard procedure of stallion sperm processing and freezing and this is a positive aspect to breeding of Arabian horses,” he said.

Val Bunting of WAHO clarified to the delegates that cloned horses and all foals by IVF will not be recognized for registration.

Moderating the afternoon session on Racing and Training was the UAE’s Faysal Alrahmani and the participating members on the panel were Mussabah Al Muhairi (UAE), Pat Buckley ( Ireland/ UAE), Mathew Cain (Australia), Thomas Fourcy (FR), Marco Oppo (Italy), Mark Powell (US) and Mohammed Al Hashmi. Almost all members agreed that each trainer adopted his own method of training and also workouts leading up to a big race though most felt four years was an ideal age for Purebred Arabians to start racing. Mark Powell said horses do get affected by travel and added that he kept the same training pattern while Pat Buckley said it was only through experience that one can pick up signs of a potential winner. “That is why connections pay huge amounts at Yearling auctions for they do see something in these untested young horses,” Buckley, the 1963 Grand National winner said.

Jockeys Linda Meech and Xavier Ziani spoke of the challenges a jockey faced in keeping his weight in the evening session which was moderated by popular racing commentator Gary Capwell. Germany’s Kai Schirmann threw light on his role with helping the Apprentice and Lady jockeys who take part in the Festival’s races while the experienced Christopher Watson of Australia spoke of the strict monitoring of the weight loss methods by Aussie jockeys.

Dr Jamal Houth said one had to have knowledge of his or her metabolism which decides weight loss or gain. “Determine the food that is allergic to you and avoid them,” he said.

But it was the HH Sheikh Mansoor Festival-supported research by the Liverpool John Moores University that was explained in detail by Dr Georges Wilson, Dr. Philip Pritchard and Dan Martin that had the delegates in rapt attention.

“Food restriction, laxatives, sweat suits, saunas, diuretics, vomiting and flipping are some of the current strategies that jockey adopt to shed weight and this has an effect on the physiological, psychological and hormonal/immuno health of the jockey,” Martin said with the help of a power point presentation.

The anticipated benefits of the research are Enhanced nutritional knowledge and awareness; less reliance on information being passed down from senior/retired jockeys; Jockeys will be able to maintain and make weight safely; less reliance on current weight-making practices and improved physical, physiological, and mental health according to Dr Wilson who has led the research for over two years now.

All the delegates and the envoys attending the Conference later in the night were hosted by the Lancers of Montebello. A Carousel dinner out was laid at the military base where The Battle of Montebello was fought on May 20, 1859 .The dinner show had a series of side shows starting with a horse show by the Cavalrymen, traditional dance and music and then the guests led by UAE Ambassador to Italy HE Saqr Naser Al Raisi and Ms Lara Sawaya, Executive Director of the HH Sheikh Mansoor Festival firing the cannons.

On Saturday the final day of the WAHRC 2016, a session on the ‘Future of Arabian Racing’ will be followed up with a WAHRC Conference Workshop while on Sunday the Festival three flagship races will be held at the Capanelle race course.