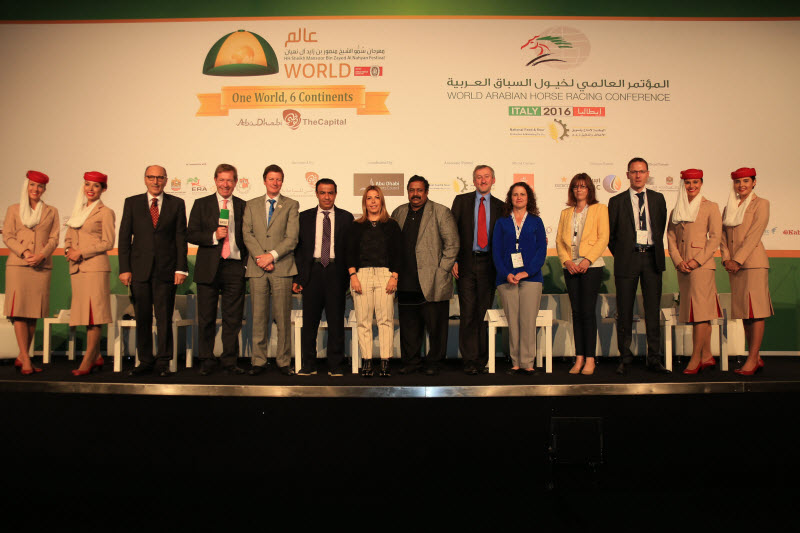 The HH Sheikh Mansoor Bin Zayed Al Nahyan Global Arabian Horse Flat Racing Festival is all set to trigger a huge boost to the Purebred Arabian racing scene in Italy when three of its major race series will be worked off on ‘Emirates Race Day’ at the Capanelle race course in Rome on Sunday, May 29, 2016.

“This will be the biggest day for Purebred Arabian racing in Italy and with over 500 delegates from all over the world, who are here for the World Arabian Horse Racing Conference, in attendance on Sunday, it is a great opportunity for the Italians,” said Ms Lara Sawaya, Executive Director of the HH Sheikh Mansoor Bin Zayed Al Nahyan Global Arabian Horse Flat Racing Festival, Chairperson of Int’l Federation of Horse Racing Academies (IFHRA) and Chairperson of Ladies & Apprentice Racing Committees in the International Federation of Arabian Horse Racing Authorities (IFAHR).

The Sheikh Zayed Bin Sultan Al Nahyan race is a Listed event with ten runners contesting over 2400 meters and Al Janoob under Anna Pilroth is the top weight. The added importance of this race is the fact that it is one of the three legs of the Festival’s European Triple Crown and this has attracted four international runners.

But the one to watch is Ziyadd under Pierantonio Convertino, a 4-year-old trained by Antoine Watrigant for owner HH Sheikh Mansoor Bin Zayed Al Nahyan, Deputy Prime Minister of the UAE and Minister of Presidential Affairs.

The biggest danger for Ziyadd could come from Tornado Byzucchele under Antonio Fadda and Nasco under Domenico Migheli while Al Janoob, Fedayn, Nil Ashaal and Lares De Pine are all capable of finishing in the frame.

In the HH Sheikha Fatima Bint Mubarak Apprentice World Championship race, South Korean Jeonghee Jeong on the unbeaten Urge De Gallura will be the favourite. Australian Jordan Childs on Ultzana, Italian Gabriele Cannarella on Triade, Great Britain’s Gemma Tutty on Usini and Argentina’s Lucas Berticelli on Usuym are all expected to be in the running for a place in the top.