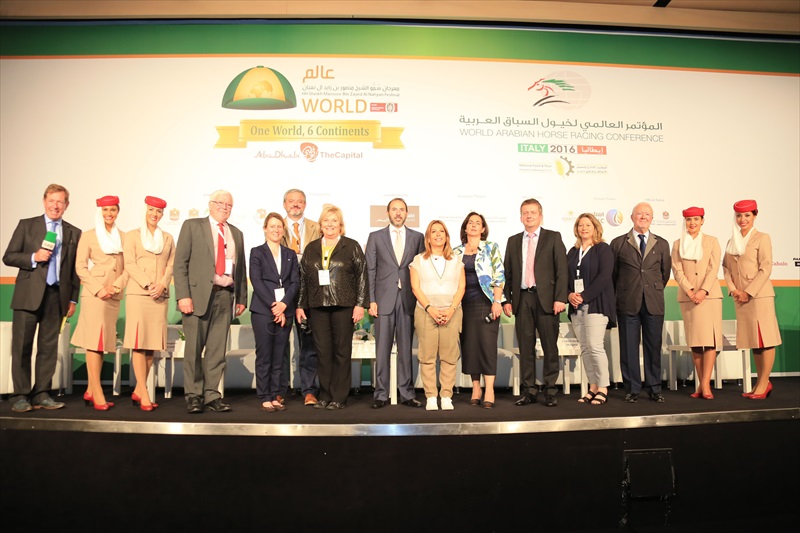 The need for a harmonized approach to handicapping system and formulation of pattern racing and a centralized data base of race information for Purebred Arabian racing were highlighted on another lively day at the HH Sheikh Mansoor Bin Zayed Al Nahyan Global Arabian Horse Flat Racing Festival’s World Arabian Horse Racing Conference (WAHRC) in Rome, Italy on day two, May 27, 2016.

Yas TV, which since its inception a year ago, has been covering a lot of Purebred Arabian horse racing and other equestrian sport came in for a lot of praise from the delegates and Al Saadi said the coverage will get better and Arabian racing will be treated in a more specialised manner.

Cobb and Claude Allies stated that both Racing Post and Paris Turf have begun to devote space for Arabian racing and agreed more was to be done. Thompson urged those involved in governing the sport to ensure the use of all modern means of communication like Twitter, Instagram, Facebook and the internet. Burt highlighted the role of PR in getting the Arabian horse activity across to the masses while Corum stated that since getting involved with the Festival, the opportunities for her magazine and the digital paper to reach a larger audience have increased tremendously.

Satya, who has written five editions of the HH Sheikh Mansoor Festival Year Book since 2010 lamented the fact that there was dearth of information being provided by the respective national federations on Arabian racing. “There are a lot of human interest angles that have to be told to ensure the growth of Arabian racing,” he said.

At the end of the session Ms Lara Sawaya, Executive Director of the Festival conveyed to IFAHR Vice Chairperson Genny Haynes the need for a data base and the latter promised the Conference that the long-awaited, comprehensive IFAHR data base will be set up at the earliest.

All achievers in their respective fields, the star women narrated their experiences as they fought their way to the top.

Al Marzooqi said, “When I joined National Feeds it was more of a men’s world but soon I adapted and from no women in the Marketing Department we now have over 50 per cent of ladies. It is all about breaking traditional mind sets and roping in the right staff, and ladies are as good as men in various jobs.”

King and Shaw, both working with the TV in UAE and Australia respectively, agreed that there were a lot of challenges in the horse racing industry particularly as a TV journalist. The two along with Koch, Morgan and Zindel are all winners of the HH Sheikha Fatima Bint Mubarak International Awards (Darley).

King said the sport has to work to trap more young racegoers and get them interested in Arabian racing while Sawaya said the Festival was promoting Arabian race meetings as ‘Family’ days in many venues.

Alawadhi said that women in the Gulf countries were provided with equal opportunities in all fields and it was more so in the case of the UAE.

Sawaya urged all ladies not to back away or get slowed down by any barriers and said, “Passion in the work you do and belief in yourself are the keys to succeed in any profession.”

This highly interactive session mainly focused on the formulation of Pattern Races and the handicapping system adopted by various countries involved in Arabian racing. Owners, trainers and jockeys put out their views with jockey Xavier Ziani urging for at least one former jockey to be involved as a Steward in decision making bodies as they can understand the issue better while deciding on cases involving jockeys. A few UAE owners said they bought horses based on their rating but found them to be way below par, in some cases dropping from 100 to around 35!

The panel agreed that the handicapping system was not uniform in different countries and it was a problem when horses from many countries lined up for an international race. The IFAHR committee stated that it has been working towards harmonizing the rules and that was the sentiment echoed by all – the need for a unified system of handicapping and pattern race formulation.

Later in the evening the nearly 500-plus delegates were hosted to a dinner at the Villamiani. After the end of the three-day conference, the Roman race centre Capanelle will stage three of the Festival’s flagship races on Sunday, May 29.