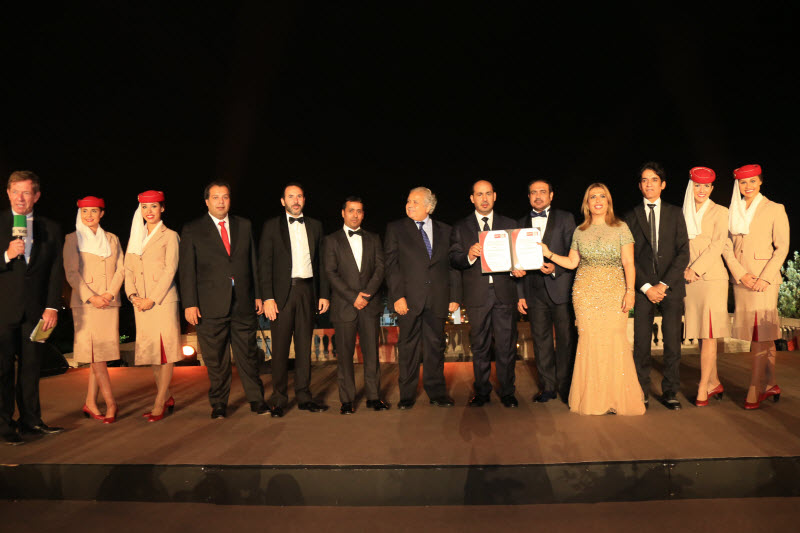 The UAE’s Minister of State for Tolerance, HE Sheikha Lubna Al Qasimi along with Omar Skalli, Director General of Society for Promotion of Purebred Arabian horses in Morocco received the WAHRC flag from the 2016 WAHRC hosts though the UAE Ambassador to Italy, HE Saqr Nasser Al Raisi in the presence of the Mayor of Rome Tronga Francesco Paolo, Dr. Hissa Abdulla Al Otaiba, Ambassador of State to Spain and Non Resident envoy to the Vatican, Ms Lara Sawaya, Executive Director of the HH Sheikh Mansoor Bin Zayed Al Nahyan Global Arabian Horse Flat Racing Festival, Chairperson of Int’l Federation of Horse Racing Academies (IFHRA) and Chairperson of Ladies & Apprentice Racing Committees in the International Federation of Arabian Horse Racing Authorities (IFAHR), UAE envoys to a few other countries with the 500-plus WAHRC delegates from 81 countries in attendance.

Mayor Tronga hailed the strong relations between Italy and the UAE and said the city of Rome was proud to have been the host for the important conference on Arabian racing. “The ties between the UAE and Italy have been strengthened. Italy’s Milan hosted Expo 2015, the universal exposition and in 2020 Dubai in the UAE will be the hosts. There is a lot of co-operation on between the two countries in this regard,” the Mayor of Rome said.

The loudest cheers of the night went to the HH Sheikh Mansoor Festival when Ziad Iskandarani, Certification Manager of Bureau Veritas awarded the ISO 9001-2015 certificate to the HH Sheikh Mansoor Bin Zayed Al Nahyan Global Arabian Horse Flat Racing Festival, the first and only one in the UAE to receive this honour. The Certificate was received by Ms Lara Sawaya and Mussalam Al Amri on behalf of the Festival.

All panel members of the various sessions during the three-day workshop, along with representatives of the sponsors, UAE owners and trainers, jockeys and racing officials were all honored by the Festival.

Local folk songs and music accompanied by dance were the highlight of the night with the well-lit city of Rome forming the backdrop to the stage where the ceremony was held followed by dinner.