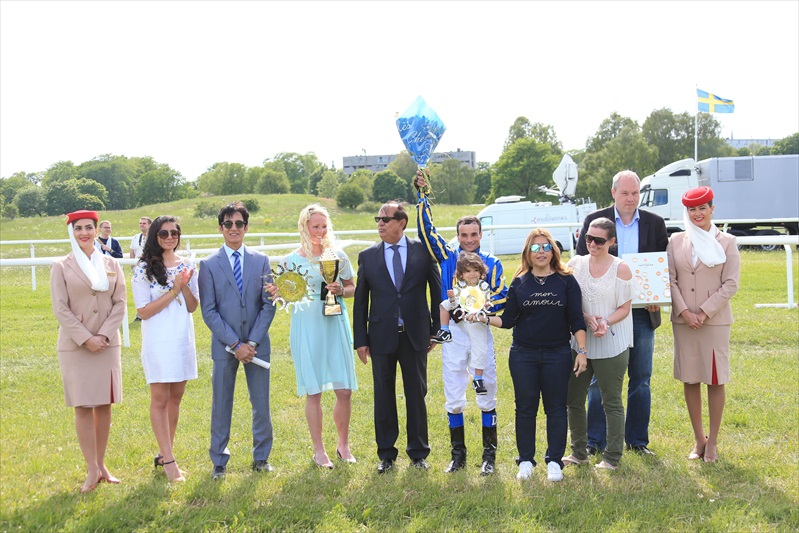 The Swedish National Day ended on a perfect note for Maria Hagman-Eriksson as the owner-trainer completed a , winning the two prestigious Purebred Arabian horse races at Gardet on Monday in Stockholm.

Thousands thronged the Gardet park area in downtown Stockholm on the National Day of Sweden and the two Arabian races under the umbrella of the HH Sheikh Mansoor Bin Zayed Al Nahyan Global Arabian Horse Flat Racing Festival were part of the special race meeting.

Though one expected the unbeaten Macallan and Gazel T, winner of the Festival’s Wathba Stud Farm Cup earlier in the season for a record 5th successive time to battle it out in the Sheikh Zayed Bin Sultan Al Nahyan Listed Cup, it was Toutatix, a 7-year-old son of Ambriorix that prevailed over Kao Kat. The winner under De Barros covered the 1500-metre distance in 1:42.50.

Macallan, under Anna Pilroth, finally tasted defeat in five starts and finished fourth behind Mad Makz under Fanny Olsson while Gazel T was 6th behind Pentagon.

In the Ladies Championship, the Irish jockey Looby showed her class when she kept Al Janoob in the hunt and then stormed away to win with much to spare. Al Janoob, a 7-year-old son of Magic De Piboul, showed that he is a good traveler after racing last Sunday in Rome and then coming over to win here in Stockholm, covering the 2750-metre distance in 3:17:30 seconds.

Sweden’s Rebecca Colldin, a last-minute replacement for Italian Kristen Bezdekova did well to finish second on Suhaim while W Catchcash under Danielle Hodsdon of the US finished third.

Maria Hagman-Eriksson seems to have taken over from where Dutch trainer Karin van den Bos left as the latter had scored doubles in the Festival’s races in two previous editions. “I dedicate this twin success to my twins,” said the Swede who has been a regular visitor to Abu Dhabi for the endurance and for the Festival’s events. “These wins are all the more sweet as I have a strong relationship with Abu Dhabi which is the capital of Arabian racing; it is a great achievement for me to bag this big double, “the winning owner and trainer of Toutatix and Al Janoob said.

HE Alkaitoob greeted the UAE leadership on the occasion of the Holy Month of Ramadan and said, “I am delighted to be here and to witness this large crowd watch Arabian racing, this truly underlines the importance of the Arabian races.”

“The Swedish National Day holiday crowd was here in thousands to watch the races and we are delighted from the Festival’s success here in the Scandinavian countries,” said Ms Sawaya.

“The Festival has established a strong presence in the Scandinavian countries and has been able to attract more fans through the attention and support of the owners, trainers and jockeys. There is more to come during the next round in Denmark in August,” she said.