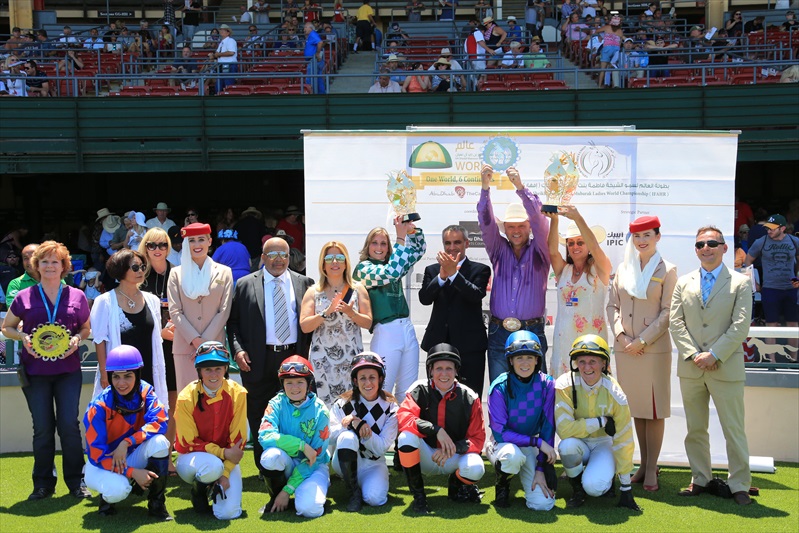 It was sweet revenge for Sand Victor as in last year’s race Paddys Day had finished ahead of Saturday’s winner.

Paddys Day has 15 points from a win and a second place in the two legs while others in the hunt are Easter Man (11 points), Uptown Dannys Boy (11), Sammy V (10) and Saturday’s winner Sand Victor (8). The points allotted are 8, 7 and 6 for 1st, 2nd and 3rd respectively and 5 points for all others. If Paddys Day runs in the final Sheikh Zayed Bin Sultan Al Nahyan Cup – Diamond Jewel race in Los Alamitos on September 10, the Scot Powell-trained 5-year-old will be the Triple Jewel winner for the second consecutive year irrespective of how they finish.

In Saturday’s race, Hugo Herrera on Sand Victor and Kelsi Purcell on Paddys Day were handily placed just off the pace which was set by Sammy V way past the half way mark. Once they turned for home, Hererra hit the front from third place though Uptown Dannys Boy led for a while before weakening away. Purcell had a lot to do and despite a late rally could not catch up with Sand Victor, the latter’s driving finish giving him a two length win. Uptown Dannys Boy under Ramon Guce finished third.

Bred and owned by Betty and Joseph Gillis, the Terri Easton-trained Sand Victor completed the 6-furlong distance in 1:17.87 in the US$ 48,000 race.

In the HH Sheikha Fatima Bint Mubarak Ladies World Championship race run over a similar distance of 1200 metres, Slamanig, a 31-year-old Veterinary surgeon, made no mistake on the pre-race favourite RB Madymoiselle.

It was almost a display with clinical precision as Slamanig kept the Scot Powell-trained RB Madymoiselle within striking distance and then began her run just after the 600 metres. From then on the 4-year-old Madj Al Arab filly just took off and Oman’s Fatma Al Manji on Dream Pearl could not do much despite a determined effort. It was a win by over two lengths for Slamanig who will make her second bid to win the HH Sheikha Fatima Bint Mubarak Ladies World Championship.

The Austrian had qualified for the final in 2013 after her victory in Casablanca, Morocco, but could only finish 5th in the final that year.

Al Manji on Dream Pearl finished second while in third place went to One Hot Chick under Eva Maria Herresthal.

“We thank HH Sheikh Mansoor Bin Zayed Al Nahyan, Deputy Prime Minister of the UAE and Minister of Presidential Affairs for the Festival’s events which are being staged here in California and in the US. I also thank Her Highness Sheikha Fatima Bint Mubarak, Chairwoman of the General Women’s Union, Supreme President of the Family Development Foundation (FDF) and Head of the Supreme Council for Motherhood and Childhood for her support to the World Ladies Championship which has seen a huge progress among lady jockeys,” the UAE envoy Al Subose said.

Ms Sawaya congratulated the winners and also mentioned the fighting display by Omani jockey Fatma Al Manji which fetched the Arab jockey the second place. “The HH Sheikha Fatima Bint Mubarak Ladies World Championship series is very popular among lady jockeys around the world and is a symbol of supremacy for those winning it,” she said.

“The quality and depth of Arabian racing in the US was evident today with the favourite Paddys Day beaten by Sand Victor. The Sheikh Zayed Bin Sultan Al Nahyan Cup Triple Jewel series is very competitive and always draws the top Arabians running in the US,” she added.