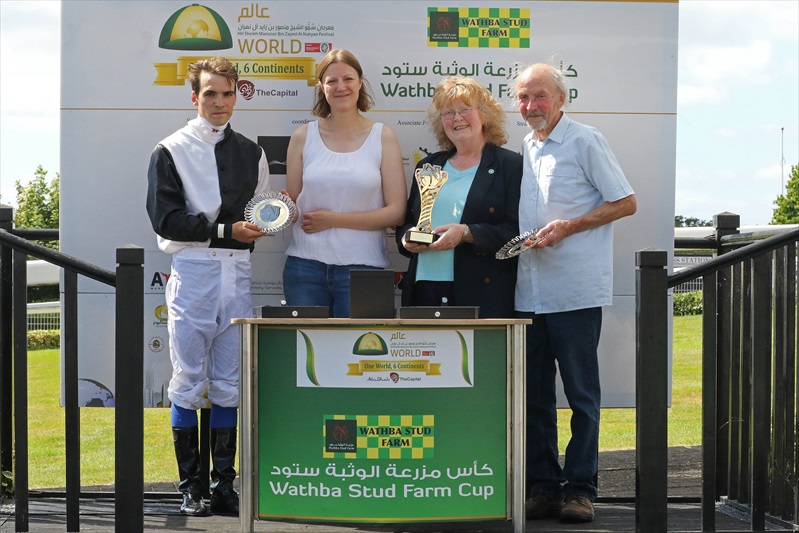 Mallow powered home on Jenny’s Peyton’s Trip To Khairo in the longest race of the day and then followed up with a win on Maidaan for his boss, trainer Philip Collington and owner-breeder, HH Sheikh Hamdan Bin Rashid Al Maktoum, Dubai Deputy Ruler and Minister of Finance.

On only his fifth ride under ARO rules, Mallow steered the 13-year-old mare, Trip To Khairo to a seven-length success in the 2800-metre Wathba Stud Farm Cup (0-40) Handicap Stakes.

“I asked Mrs Peyton for the ride, right back at the start of the season and she finally put me up today, which was brilliant. The mare is old enough now, she knows her job, it was just a case of getting her round the bends and she did everything else,” Mallow said.

Of Maidaan’s win in the Wathba Stallions Stakes he said. “I ride Maidaan in all his work at home and I know exactly what he’s capable of. He’s not keen on jumping from the stalls, but he seems to like tape starts and he really enjoys being out in front. I had a season point-to-pointing, riding a winner from 14 rides and I started working for Phil in April this year. I can’t thank him enough for the chances he’s given me.”

Also recording his first win was Difaa in the Wathba Stallions Maiden Stakes which opened the days’ proceedings. The 4-year-old gelding by Jiyush had made an eye-catching debut when second at Chelmsford last month. This warranted a transfer from his owner Nicola Thorne into the care of James Owen, currently vying for the leadership of the 2016 Trainers Championship table. This marks a welcome return to Arabian racing for top Endurance GB rider Thorne, who is now also breeding Arabian racehorses sired by her original racehorse, Tidabret, a Listed winner.

Max Kendrick, who had kept the ride on Difaa commented. “He was very green at Chelmsford and we thought he’d improve. I rode him in his last piece of work at home on Wednesday and he went really well. When I did hit the front today, though he was still a bit green, he stuck to his task well and I struggled to pull him up at the end.”

There was further success for Paul Simmons’ homebred Zayin Zachilles, who followed up his recent Newbury victory with a brave performance to win by a head in the feature handicap of the day, the Wathba Stallions (0-80) Handicap Stakes. More homebred success came for Adam Newey. He not only trained the Wathba Stud Farm Cup (0-60) Handicap winner Synergy, but bred her with Sam Davison and owns her in partnership with Linda Cross.

Amanda Smith, ARO Racing Manager was delighted with another successful day’s racing, commenting. “What a great way to start a busy month for the HH Sheikh Mansoor Bin Zayed Al Nahyan Festival. I am particularly pleased to see winners for UK breeders and long-time supporters of Arabian racing. I thought Nicola Thorne’s Difaa looked very smart, it will be interesting to see how his career progresses.

“We now look forward to the two exciting Emirates Days at Sandown Park on 19th and 20th which feature the HH Sheikha Fatima Bint Mubarak Ladies World Championship (IFAHR) and the Sheikh Zayed bin Sultan Al Nahyan Cup (Group 1 PA). We then close the month with the Festival’s final Wathba Stud farm Cup meeting in Hereford on the 28th.”