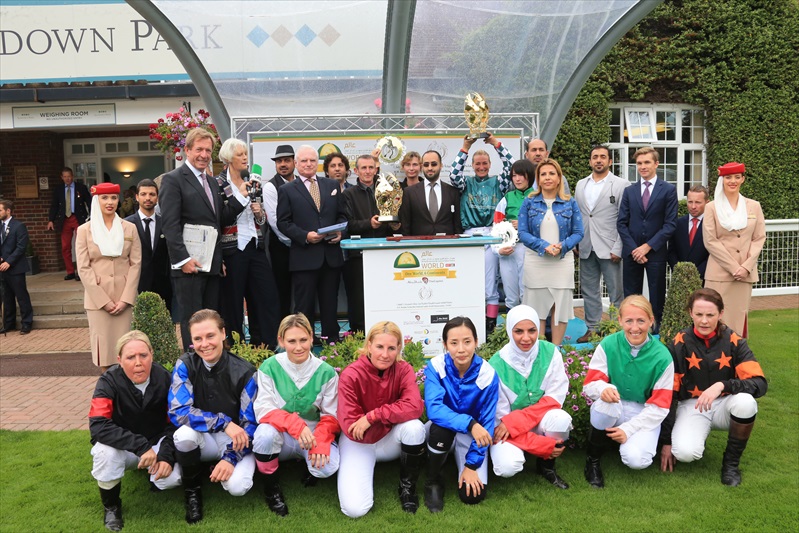 Germany’s Monique Luebcke made it a pillar-to-post win on Koline to book the 13th berth in the November 13 final in Abu Dhabi of the HH Sheikha Fatima Bint Mubarak Ladies World Championship (IFAHR) Series.

The 34-year-old Luebcke was superb in demolishing the challenge of the remaining nine lady jockeys including two professionals in the UK leg of the HH Sheikha Fatima Bint Mubarak Ladies World Championship (IFAHR) Series run on Friday at the Sandown Park race course.

Held as part of the HH Sheikh Mansoor Bin Zayed Al Nahyan Global Arabian Horse Flat Racing Festival’s two-day race meeting’s, the one mile (1600 metres) contest with a prize fund of £ 22,000 was part of 7-race card on Friday with the remaining six races for Thoroughbreds supported by UAE-based companies.

Earlier the 10-horse field was reduced to nine when Japanese professional Nanako Fujita’s Ultimate Force became a late withdrawal with some ill-tempered behavior at the paddock. That left Fujita in tears but after the race, Ms Lara Sawaya, Executive Director of the HH Sheikh Mansoor Bin Zayed Al Nahyan Global Arabian Horse Flat Racing Festival, Chairperson of the International Federation of Horse Racing Academies (IFHRA), Chairperson of Ladies & Apprentice Racing Committees announced that Fujita will be given a wild-card entry to the finals in Abu Dhabi!

Luebcke, on instructions from the owner-trainer Stephen Gregory, took Koline to the front soon after the start and stayed there, comfortably leading the pack. It was just with about 200 metres to go that Australian professional Laura Cheshire on the 14-year-old Noble Athlete launched a serious challenge from the inside. However Luebcke managed to steer the tiring 7-year-old mare to the finish and help Gregory post one of his most famous wins from a yard of just two horses!

Noble Athlete was beaten by little over a length with local hope Anna Wallace on Synergy running into third place.

Gregory, apart-time driving instructor who owns and trains Koline in partnership with his wife, had been without a winner for eight years before Friday’s victory!

“This is beyond our wildest dreams, the ease in the ground certainly helped, we’ve always been knocking on the day with her and she’s come good today. Monique (Luebcke) got her settled and she travelled well. We didn’t know we were going to win today, we would have been happy with a place,” Gregory said.

The German winner was equally elated at winning in her first ride in the UK. “I could not take part last year as I had injured my shoulder. But today is unbelievable,” said Luebcke, who has been in show jumping and Eventing for a long time. It was her 5th win in her 35th start as a flat race jockey.

A total of six other races for thoroughbreds, all supported by UAE companies, were held after the HH Sheikha Fatima Bint Mubarak Ladies World Championship race.

David Brown saddled the winner in the Abu Dhabi Sports Council Nursery race with Sean Levey winning on favourite Looting while in the UAE National Archive Handicap, the favourite Ejbaar was beaten by Babyfact under Jim Crowley for trainer Malcolm Saunders.

The National Feed & Flour Production Handicap was scooped up by Wimpole Hall under Silvestre De Sousa for trainer William Jarvis while favourite Carenot from the yard of William Haggas was a comfortable winner under Pat Cosgrave in the IPIC Fillies’ Handicap Stakes.