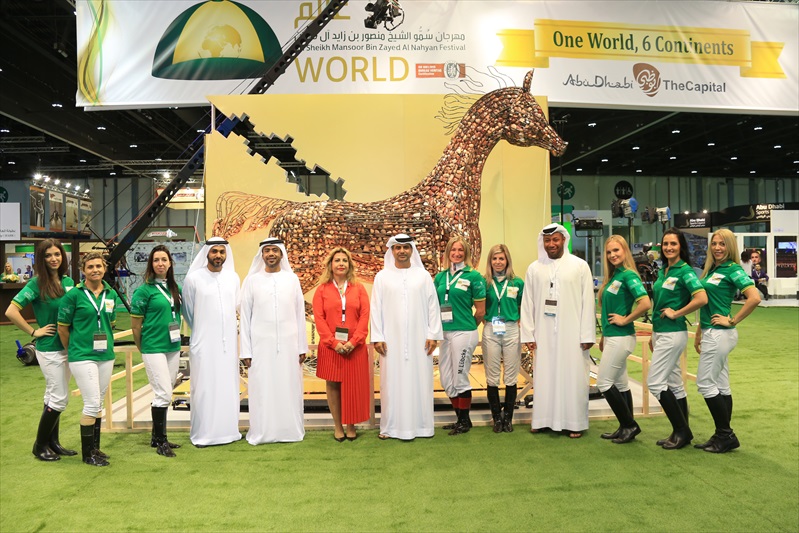 Endurance sport under the umbrella of His Highness Sheikh Mansoor Bin Zayed Al Nahyan Global Arabian Horse Flat Racing Festival is spreading its wings far and wide and will include several more countries in the 2017 season.

Ms Lara Sawaya, Executive Director of the HH Sheikh Mansoor Bin Zayed Festival, Chairperson of the International Federation of Horse Racing Academies (IFHRA) and Chairperson of Ladies & Apprentice Racing Committees in the International Federation of Arabian Horse Racing Authorities (IFAHR), announced this at a press conference on Thursday, October 6, 2016 on the sidelines of the 14th edition of Abu Dhabi International Hunting and Equestrian Exhibition (ADIHEX) currently on at the Abu Dhabi National Exhibition Centre premises.

Ms Sawaya stated that the Festival introduced endurance sport five years ago and ever since has not looked back and over the years many new countries are joining the fraternity. “The year 2016 saw many new countries in the endurance calendar and more will be added during 2017, thanks to the support of His Highness Sheikh Mansoor Bin Zayed Al Nahyan, UAE Deputy Prime Minister and Minister of Presidential Affairs and Her Highness Sheikha Fatima Bint Mubarak, Mother of the UAE, Chairperson of the General Women’s Union, Supreme Chairperson of the Family Development Foundation and Chairwoman of the Supreme Council for Motherhood and Childhood and Mother of the World,” she said.

She also announced that the Festival will be hosting the FEI 120-km 2-star HH Sheikha Fatima Bint Mubarak Ladies Cup at the Al Wathba Endurance Village in Abu Dhabi, on November 26, 2016 which will attract riders from all over the world including the recent winners at the Endurance Equestrian Negrepellise on the historic Saint-Etienne-de-Tulmont region in Montauban, Toulouse, France.

Spain, Hungary and Belgium will have more active roles to play in the upcoming events, Ms Sawaya added noting that Spain did well to grab silver at the Negrepellise events. “We are working in close cooperation with several equestrian federations for the 2017 events,” she added.

Dr. Abdulla Al Reyes, Director General of the National Archives, commenting on the November 26 event said, “Abu Dhabi will host this special endurance event and lady riders from all over the world will meet in the capital city to face a tough challenge and it will be exciting,”

Ahmed Saeed, Department of Justice – Sports Court (CAS) stated that it was interesting to note that the great leaders of the country are themselves endurance riders including His Highness Sheikh Mohammed Bin Rashid Al Maktoum, Vice President and Prime Minister of the United Arab Emirates and Ruler of Dubai and His Highness Sheikh Mansoor Bin Zayed Al Nahyan. “Abu Dhabi is turning out to be the international capital of all horse racing activities and this is a great achievement for the Festival,” he said. He thanked His Highness Sheikh Mansoor for his support and Ms Lara Sawaya for executing the Festival’s activities successfully.

Khaled Hussain, General Authority of Youth and Sports Welfare, while thanking Sheikh Nahyan Bin Mubarak Al Nahyan, Minister of Culture, Youth and Social Development, stated that that endurance riding has become popular worldwide and the Festival is boosting the Arabian horse not only in racing but also in providing education and knowledge. He thanked Her Highness Sheikha Fatima Bint Mubarak for her support which resulted in the success of UAE lady riders in Negrepelisse.

Dr. Stefano Daneri, representing Global United Veterinary Services and National Feed and Flour Production and Marketing Co. LLC, primary sponsors of the Festival, thanked Her Highness Sheikha Fatima Bint Mubarak for her strong support to the UAE lady riders who are holding the country’s flag high in the world today. “We were mocked at when the concept of endurance riding exclusively for ladies was conceived, but today we have become the torch-bearers for this unique equestrian sport,” he said.

Ian Williams, Consultant, endurance, and ex-FEI official, stated that though endurance riding was ‘underestimated’ ‘it’s a unique game and is one of the fastest growing equestrian sports in FEI. “Thanks to His Highness Sheikh Mansoor Bin Zayed Al Nahyan, endurance, a unique sport, has spread to the jungles of Malaysia, Savannahs of Americas and the deserts of Arabia, and growing further.”

Riccardo Giachino representing the Equestrian Centre Horse Country from Sardinia, Italy, said they were very keen to host the Festival rides and looking forward to it in 2017. He said the Sardinia horse riding centre is one of the biggest horse riding centres in Europe, with both indoor and outdoor arenas.

Arnold stated that the Belgium Federation is hosting a three-day endurance festival in Brussels under the Festival’s umbrella from August 17-19, 2017 which will feature a 160-km FEI European Open, 120-km FEI World Championship for Young Horses and 120-km FEI Nations Cup for Lady Riders.

Ms Sawaya concluded that 2017 will be an exciting year for the endurance sport and with many more countries coming under the Festival, “a challenging and much-awaited year is ahead for all the equestrian sport lovers.”