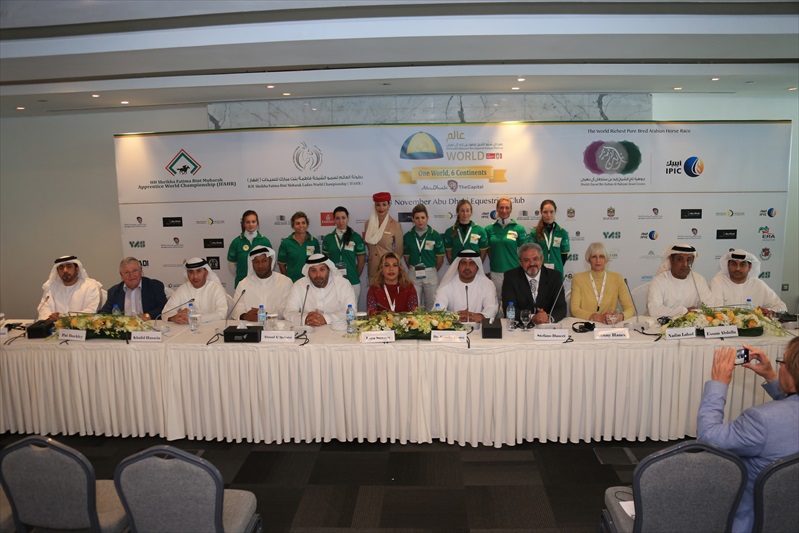 As many as 1,800 invitees, including endurance and flat racing jockeys and other officials, are expected to attend the HH Sheikh Mansoor Bin Zayed Al Nahyan Global Arabian Horse Flat Racing Festival’s ‘One World, Six Continents’ extravaganza to be held at Abu Dhabi, UAE, from November 7-14, 2016, marking the end of Festival’s events for the year 2016.

Ms Sawaya stated that the second edition of Euros 1.2 million Sheikh Zayed Bin Sultan Al Nahyan Jewel Crown (Group1) – the world’s richest Purebred Arabian race, will be the highlight of the grand finale of the His Highness Sheikh Mansoor Bin Zayed Al Nahyan Global Arabian Horse Flat Racing Festival. The race will field as many as 16 horses and the entries will close on October 16.

Giving details Ms Sawaya stated that three horses will be invited from America-Paddy’s Day, Sand Victor and These is Awesome, whereas two will be from Europe, two from Qatar, one from Sultanate of Oman. The UAE owners will be represented by one horse each, be it locally trained or outside the country.

Other Gulf countries like Saudi Arabia and elsewhere will be invited from next year provided the rating is not be less than 106 and the standard is 113, she added.

This year’s event will be conducted under very strict security measures, with special accreditation for all those involved in the event, she stated.

Dr. Abdulla Al Reyes, Director General of the National Archives, said it is always a pleasure to be part of the HH Sheikh Mansoor Festival. “We are proud to be part of the One World,6 Continents programme which puts slogans into action.”

The November activities will have a ‘special flavour and spice like never seen before’, he said.

While thanking His Highness Sheikh Mansoor Bin Zayed Al Nahyan, UAE Deputy Prime Minister and Minister of Presidential Affairs, Dr. Al Reyes mentioned that the Archives will have a world summit of archives to coincide with the centennial celebrations of Sheikh Zayed Bin Sultan Al Nahyan in 2018. He also announced that the National Archives has been chosen to host the International Conference on Archives to be held in 2020 and over 5,000 delegates from different parts of the world will be in attendance.

Ahmed Al Qubaisi, Manager, Communications, Abu Dhabi Sports Council, congratulated everyone who will be taking part in the November races and conference. “We support sport activities throughout the year, but HH Sheikh Mansoor Festival event, which number around 160, tops our agenda.”

Stefano Daneri, from National Feed and Flour Production and Marketing Co. LLC, one of the key sponsors of the Festival, said that the company believes in His Highness Sheikh Mansoor Bin Zayed Al Nahyan’s vision of racing which is a strong combination of tradition and culture and added “we are proud to be part of it.”

Ahmed Saeed, Department of Justice – Sports Court (CAS), stated that their department was equally proud to be part of such a prestigious Festival. He thanked His Highness Sheikh Mansoor for the opportunity.

Mubarak Al Nuaimi, Director Promotions & Overseas Offices, Abu Dhabi Tourism & Culture Authority, also thanked the Festival and said they were ‘well prepared to host the big event and the huge tourist influx during the November event.’ “We will show the best of Abu Dhabi in November” he assured.
Nadim Lahad, Emirates Airlines, said: “The Emirates airlines is only not carriers of passengers but carries the message of HH Sheikh Mansoor Festival to all the six continents. “Abu Dhabi is home sweet home and it deserves the best”, he stated.

Khaled Hussain, General Authority of Youth and Sports Welfare, thanked Sheikh Nayhan Bin Mubarak Al Nahyan, Minister of Culture, Youth and Social Development and hailed the success of the Festival. He also thanked His Highness Sheikh Mansoor Bin Zayed and Her Highness Sheikha Fatima Bint Mubarak, Mother of the UAE, Chairperson of the General Women’s Union, Supreme Chairperson of the Family Development Foundation and Chairwoman of the Supreme Council for Motherhood and Childhood and Mother of the World, for their support to the ladies sports. “The Festival has popularised His Highness Sheikh Mansoor vision on Purebred Arabians not only locally but globally.”

Essam Abdulla of Emirates Arabian Horse Society, said “We want to see owners from different parts of the world competing in Abu Dhabi on the big day.” He also thanked HH Sheikh Mansoor for his continuous support by making the Festival an annual event which is providing more global exposure to the Arabian horses.

Pat Buckley of Abu Dhabi Equestrian Club, said that after the marvelous success of the of Euros 1.2 million Sheikh Zayed Bin Sultan Al Nahyan Jewel Crown (Group1) – the world’s richest Purebred Arabian race in 2015, all the world has its eyes on Abu Dhabi, the capital of Arabian racing. “The only drawback for the American horses is the right-handed track but they will have enough time and the facility to exercise or gallop,” he said and offered all the assistance for the jockeys to use the club for training.

Ms Sawaya also stated that there will be a full field of 16 horses for the HH Sheikha Fatima Bint Mubarak Ladies World championship with lady jockeys who won in races held in Australia, Belgium, Bahrain, France, Morocco, Japan, Italy, The Netherlands, Oman, Pleasanton and Texas(USA),Poland, United Kingdom, Switzerland and Sweden. Apart from these winners, a Moroccan lady jockey was picked in a draw held by Ms Sawaya and one from Japan was included in the finals as the Japanese rider had a minor mishap during her attempt.