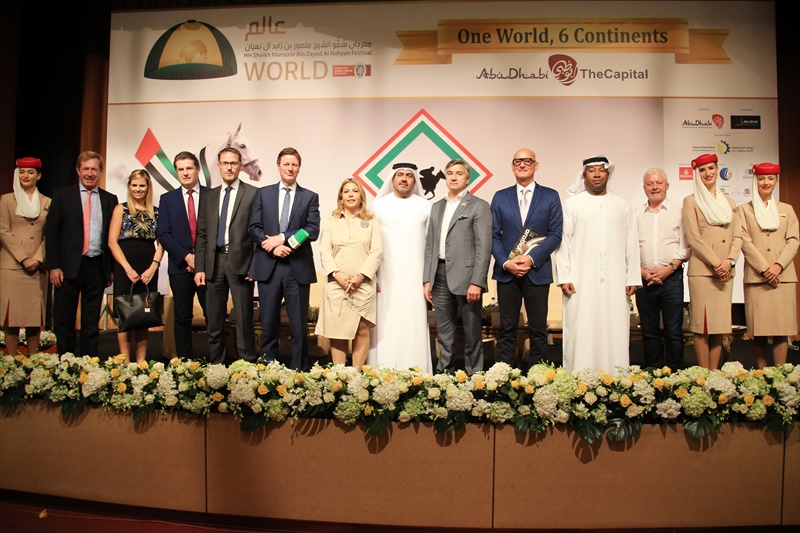 One of the most important aspects of any event, role of media and public relations, came under the scanner on the second and final day of EARS HH Sheikha Fatima Bint Mubarak Conference for Training and Education at the National Archive premises in Abu Dhabi on Friday, November 11, 2016.

Brannan started off the deliberations pointing out that international coverage of Arabian racing has increased tremendously, thanks greatly to HH Sheikh Mansoor Festival which has spread awareness all over the world.

Discussion on role of jockeys and media was the highlight of this highly interactive session.

Smurthwaite from Racing Post began his deliberations thanking the Festival. “We have a strong relation with Arab racing, enjoy covering Arab races, and all things related to His Highness Sheikh Mansoor Festival,” he said.

Regarding role of jockeys in the media, Smurthwaite said that while jockeys are being interviewed “they should be honest and engaging,” for which one of the jockeys quickly quipped that if they are very honest “they may not get a chance to race again!”

Derek Thomson was of the opinion that media-jockey role was “like playing tennis. You give and you take.” He felt that Arab racing has grown from strength to strength and reached the pinnacle and the mere fact that people love Arab horses has made it reach such heights.

Majority of the panelists felt that jockeys are generally not prepared to face the media; the reasons could be many and sundry- lack of experience, fear of print or electronic media, no preparation, lack of education and above all time constraints.

Jean affirmed that jockeys should be available for media despite time constraints and Lara King pointed out race courses could play a vital role in this aspect.

Enrico, who just launched a magazine for Purebred Arabian horses under the Festival’s umbrella, highlighted the role of racing schools in training the jockeys to face the media. “Even if a jockey has just finished five or six races, he should take ample time to answer the media questions and I personally feel racing schools can prepare the jockeys”. Smurthwaite advised jockeys not to be “daunted by the idea of an interview.”

Derek Thomson stressed that it could even be a personality issue and training may or may not help jockeys. Narrating his experience he stated that one of the top most jockeys in the world could not even answer a simple question after his big victory in a UK race recently.

At the outset Ms. Sawaya thanked HH Sheikh Mansoor and HH Sheikha Fatima for ” giving every single jockey present in Abu Dhabi conference today a chance to discover the world.”

“It was the vision of HH Sheikh Mansoor to take jockeys worldwide and help them in their endeavor to be the best in their chosen field and IFHRA was born as a result of this,” she said.

Through conferences like this Ms. Sawaya said: “we can help you to grow but you should help yourselves to achieve the best.”
After listening to several deliberations Ms. Sawaya promised that from henceforth a seminar will be held for trainers on how to train their jockeys.

Considering there could be issues which need not be physical but psychological too, Ms. Sawaya added a “holistic approach was essential to address them.” She said the Festival will seek the help of a Reiki Master to help the jockeys. She also promised that a workshop will be held before all the races for apprentice jockeys from 2017 which will be supervised by Kai Schirmann, Director, German Jockey School and head coach for HH Sheikh Mansoor Festival apprentice jockeys.

The workshop also deliberated on issues revolving around weight management, how to improve jockeys’ lifestyles, a special workshop for jockeys in the Morocco Conference on World Arabian Horse Racing in May next year and a seminar for trainers to train their jockeys.

On Thursday night all guests were invited to a Salsa night by the Festival.