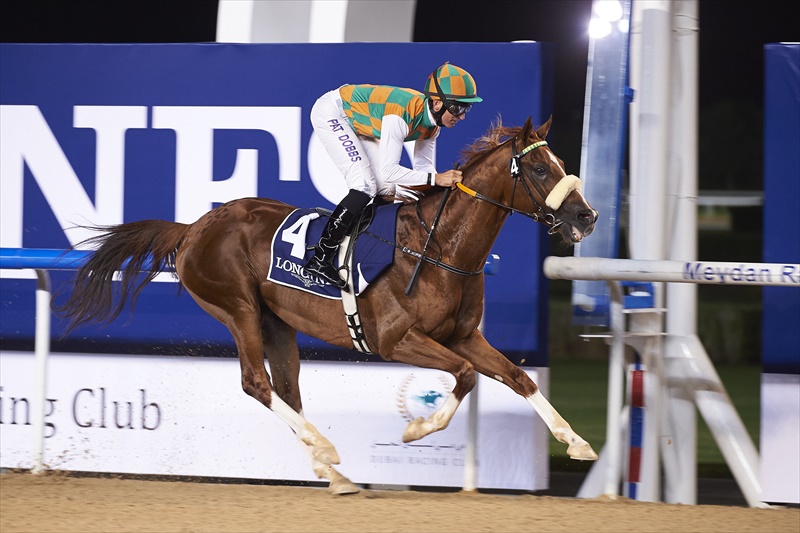 Shateh, a 7-year-old son of Mahabb completed the 7-furlong distance in 1:30.25, bettering the 2013 record created by the HH Sheikh Mansoor-owned Rakha, another daughter of Mahabb, the UAE-bred stallion that is currently standing at Wathba Stallions.

In Thursday’s 1400-metre Bani Yas presented by Longines Passion in Equestrian, all eyes were on AF Mathmoon, the winner of this race in 2016 who is trained by Musabbeh Al Mheiri at Oasis Stables who went on to win the Dubai Kahayla Classic on Dubai World Cup day.

However, dropping back to 1400m did not seem to suit him and his jockey, Fernando Jara, was soon niggling at him whereas Dobbs, aboard the Majed Al Jahouri-trained Shateh, always looked happy.

Jumped straight to the front by Dobbs, sporting the colours of HH Sheikh Hamdan Bin Mansoor Bin Zayed Al Nahyan, Shateh shot clear 700m out and was never to be headed.

AF Mathmoon held second but never threatened to bridge the gap to the winner, with Burning Breeze snatching a distant third late home.

“Shateh is a genuine Group 1 horse and this was only his fourth dirt start,” said Al Jahouri. “He was second on his three other dirt runs, once behind Al Mathmoon in this race last season.

“Al Mathmoon also beat Shateh on turf at Abu Dhabi in the Group 1 Liwa Oasis, but we received weight from him today.

“Shateh has won at 1400m before but we thought he was more of a sprinter so he has surprised me a bit tonight.

“We will probably have to try the 1600m of the Group 1 Al Maktoum Challenge R1 next,” said Al Jahouri.

It is another success for the Wathba Stallions, set up as the breeding arm of the HH Sheikh Mansoor Bin Zayed Al Nahyan Global Arabian Horse Flat Racing Festival which is headed by Ms. Lara Sawaya.

Shateh’s sire Mahabb is one of our top stallions with proven winning by his progeny and is currently standing at Wathba Stallions, she stated.

“Semen from stallions owned by HH Sheikh Mansoor including Mahabb, his sire Taher De Candelon, in addition to Munjiz, Sire D’albret, Mawood, Quazar and Sarrab to mention a few, is provided by Wathba Stallions to Purebred Arabian horse breeders around the globe,” Ms Sawaya said.