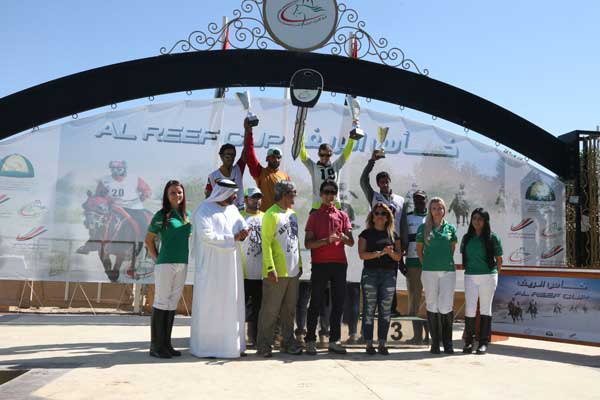 covered the 120k distance 4hours, 12minutes and 24 seconds at an average speed of 28,526 km/hour to lead by just six seconds ahead of the runner up.

Sabrina finished the 40km first loop in the seventh position as 100 riders from around the world started earlier in the morning. Later, she made a quick move to take second in the second 40km loop before dropping back to finish seventh by the end of the third 20km vet gate. But, she rallied to hit the front in the fourth and last 20km loop and held on very strongly in the final stages.

Meanwhile, the winner said she’s delighted to see herself winning this prestigious event for the first time since her arrival into the UAE six years ago.

“I have won many races in my country, but I’m delighted to have it here as well,” she told newsmen in a post-race chat. “My best performance was second at the Dubai International Endurance City. The race was competitive and the second loop was the toughest due to the huge amount of sand. I would like to thank my trainer Abdulla Al Hammadi who has prepared the horse and told me what to do and what to let in the process. I have increased the speed in the final stage to catch up the leader and fortunately I was able to get there,” she said.

Lara Sawaya said: “Under the directives of HH Sheikh Mansoor bin Zayed Al Nahyan, we have invited 100 guests to attend the President Endurance Cup on February 14. The 18 members of the International Federation of Horse Racing Academies (IFHRA) will also be invited to attend the second meeting on February 12 at the Mangroves Hotel after the official registration of the new body with the authorities following the ratification and approval of the statute of the federation. The meeting will discuss the issues on the agenda for the upcoming period.”