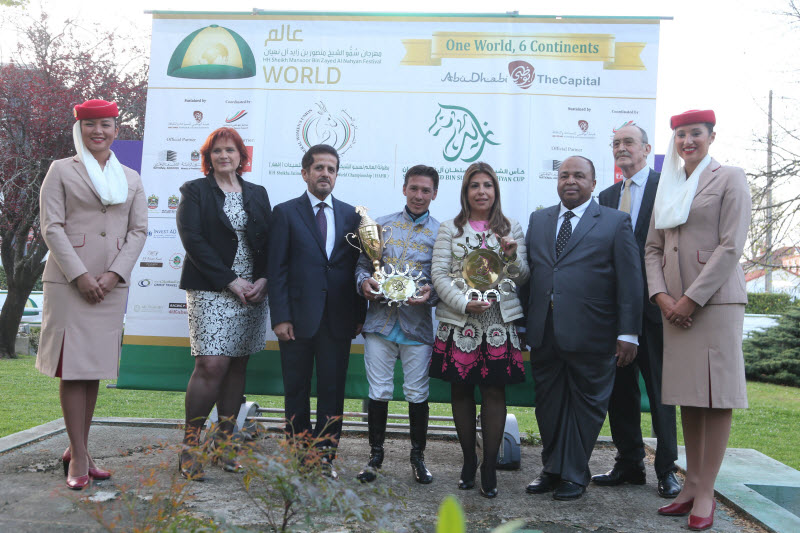 The 29-year-old Al Wardi, who has come close to winning a race ever since her fellow Omani amateur Fatma Al Manji did so in the US in 2012, finally crossed the post first on Shen to win the 2015’s seventh leg of the HH Sheikha Fatima Bint Mubarak Ladies World Championship race at the Toulouse Hippodrome here on Friday.

On the same day the prestigious Sheikh Zayed Bin Sultan Al Nahyan Cup Group 2 contest, which also signaled the start of the first leg of the Europe’s Arabian Triple Crown, was also run and it was a fourth consecutive win for Al Mouwaffak, ridden by Julien Auge.

Both events were held under the vision and directives of His Highness Sheikh Mansoor Bin Zayed Al Nahyan Deputy Prime Minister of the UAE and Minister of Presidential Affairs.

“He jumped very nicely from the stalls and settled well not far away from the leading pair,” Auge said later.

“With about 300 metres to go, my mount was in full command, but I have felt the pressure when Eyquem put Ghadanfar Al Khalediah on top gear and tried to hold me in as the post loomed up, but my horse held on in the dying strides,” he added.

The winner held up very strongly to prevail by a head and make it four out of four in 2:17:92 seconds and set sight on the $50.000 Euro European Triple Crown with two rounds remaining.

n the ladies championship, Azhar Al Wardi left the machines very quickly onboard Shen and won the battle for the lead and held on courageously when attacked by the French lady jockey Alexandra Rosa close home to prevail by a head. The winner clocked 1:48:31 seconds for the mile trip.

“I would like to thank Her Highness Sheikha Fatima Bint Mubarak, Chairwoman of the General Women’s Union, Supreme President of the Family Development Foundation (FDF) and Head of the Supreme Council for Motherhood and Childhood, for, without her support we won’t be able to come racing all over the world,” said a tearful Al Wardi. “I have finished second in Bahrain and it was a good sign that made me more determined to go one better this time out,” she added.

“Thank you Lara Sawaya for all your hard work to bring the lady jockeys from the different parts of the world to compete together,” she said. “I’m happy to have my mother with me to witness my first success in this prestigious competition.

“In fact, my horse was not among the front runners for the trophy, but the trainer was optimistic and made me feel relaxed,” she added.

The race was attended by the UAE ambassador to France Mr.Maadhad Hareb Alkhyeli , who has presented the prizes and trophies to the winners along with Ms Lara Sawaya, Executive Director of the HH Sheikh Mansoor Bin Zayed Al Nahyan Global Arabian Horse Flat Racing Festival, Chairman of the International Federation of Horse Racing Academies (IFHRA), Chairman of Ladies & Apprentice Racing Committees in the International Federation of Arabian Horse Racing Authorities (IFAHR) and other sports officials.

Ms Sawaya congratulated Al Wardi for her courageous ride saying that they are delighted to see the Omani jockey booking her spot in the lineup in the dream finale. “It’s a double delight to stage a successful race and see an Arab lady winning it,” Ms Sawaya said

“We would like to remember also her colleague Fatima Al Manji who has won in Texas in 2012 and we would like to say to her that we have missed you,” Sawaya concluded.