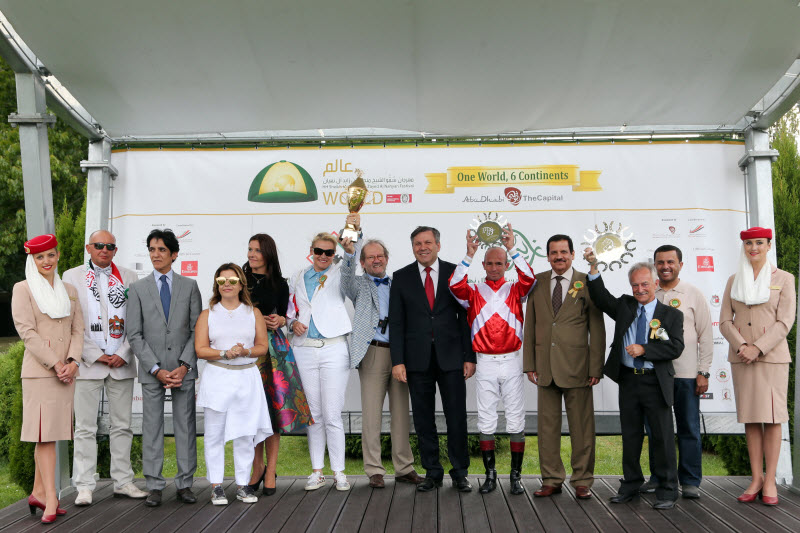 Ameretto proved his class as one of the top Purebred Arabian horses racing in Europe winning the Polish leg of the HH Sheikh Mansoor Bin Zayed Al Nahyan Global Arabian Horse Flat Racing Festival’s Group 3 Sheikh Zayed Bin Sultan Al Nahyan Cup and with it the European Triple Crown for the fourth year in a row.

Ameretto, the 9-year-old son of Amer was beaten to second spot by Lahoob in Duindigt, and had to win on Sunday to claim the European Triple Crown and the bonus of Euros 50,000. The first leg winner Al Mouwaffak in Toulouse and Lahoob were not running in this final leg and Ameretto’s task was cut out.

With Italian Mauro Maneuddu on board, Ameretto showed what a great champion he is as he came up with his traditional run to win the 2,600-metre race at the Sluzewiec Racetrack here in Sluzewiec on Sunday.

“Ameretto is a wonderful horse. He was always going well and responded keenly when I asked him the question in the home straight,” said winning jockey Maneuddu.

Winning trainer Gunter Richter said “Last year we decided to retire him to stud, but he continued to win and the connections felt he should stay in competition.”

“However, first crop of this top European performer will be seen next year following the decision of the owner to use his semen in the breeding process prior to his official retirement,” Richter added.

The 23-year-old Canadian apprentice jockey said he was over the moon after securing a berth in a dream final of the HH Sheikha Fatima Bint Mubarak Apprentice Championship in Abu Dhabi.

“I think I owe it to a lucky draw which made me the ride on such a high class horse,” he said. “The instructions were to keep Kasir Al Khalediah behind the early pace, and to let him run in the home straight, but I was truly astonished with the smooth progress which he made to hit the front and sprint home unchallenged,” Duchaine said.

The winner covered the mile’s distance in 1:50:22 seconds to win by four lengths. English rider Sophie Killoran finished second onboard Sirego and behind them came Fucksuss under the South African apprentice Collen Storey.

The races were attended by Jansuz Piechocinski, Deputy Prime Minister of Poland along with UAE Ambassador to Poland Dr. Yousif Eisa Hassan Eisa Al Sabri besides other sports officials and a large number of racing fans.

Ms Lara Sawaya, Executive Director of the HH Sheikh Mansoor Bin Zayed Al Nahyan Global Arabian Horse Flat Racing Festival, Chairperson of the Int’l Federation of Horse Racing Academies (IFHRA) and Chairperson of Ladies & Apprentice Racing Committees in the International Federation of Arabian Horse Racing Authorities (IFAHR) commented: “It’s a great and unprecedented achievement by this brilliant horse Ameretto and I’m truly excited with this impressive performance.” Ameretto has won 13 of his 27 starts and has never finished out of the frame in the rest.

Regarding the HH Sheikha Fatima Bint Mubarak Apprentice World Championship, Sawaya said: “The youngsters are the seeds of the future who have received the support of the ‘Mother of the World’ HH Sheikha Fatima Bint Mubarak, Chairwoman of the General Women’s Union (GWU), Supreme Chairwoman of the Family Development Foundation (FDF) and President of the Supreme Council for Motherhood and Childhood.”

“We are also delighted to welcome new partners as represented in Hayatna Company,” she said.