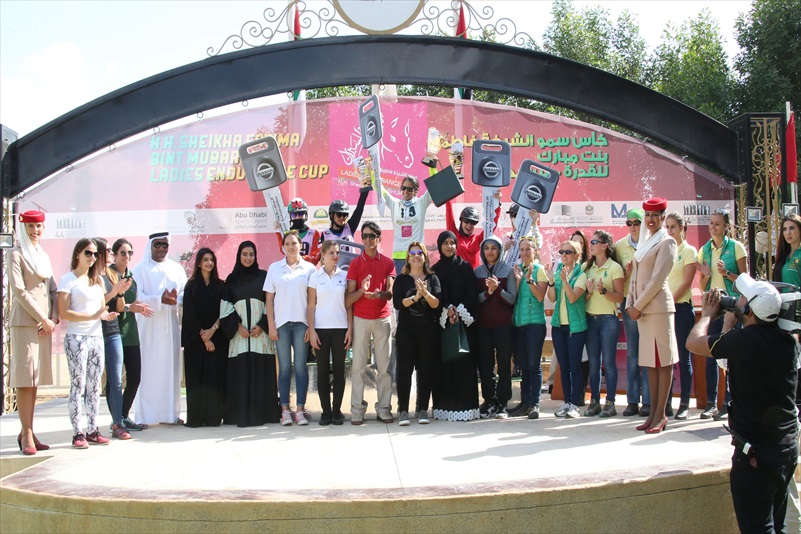 Last year Moreno carried Argentina’s Catalina to victory in this race and this year it was another Argentinean lady Milena Mendez who won a thrilling 100-km ride spread over four stages.

Earlier in the morning 95 lady riders started in the race which was held under the directives of HH Sheikh Mansoor Bin Zayed Al Nahyan, UAE Deputy Prime Minister and Minister of Presidential Affairs and sponsored by National Feed and Flour Production and Marketing Co. LLC among others.

The ride was attended by HH Sheikh Mansoor and Sheikh Zayed Bin Hamad Bin Hamdan Al Nahyan among others.

Milena, who was 5th at the end of the first 40kms then moved into second place in the second stage of 25kms but dropped to third in the third stage of 19 kms.

Milena on Moreno started 14 seconds behind Poland’s Kamila Anita Kart on Othentik Du Fausset and fellow Argentine Sabrina Mendiz on El Pangue Beisk but her past connection with her horse seemed to have brought out the best in the final 16-km loop.

Milena and Moreno had won the 100km Sheikha Fatma Bint Mansoor Bin Zayed Al Nahyan Ladies Endurance Cup on February 28 earlier this year and their partnership worked again as the rider registered her second win and the horse, his fourth win in the UAE. The victory was by a narrow margin as the two horses were separated by just 30 seconds with the winner completing the 100-km distance in 3 hours 38 minutes and two seconds.

“This is my second win and both were Ladies rides with the same horse Moreno,” said the winner, adding that the track was tough at places where there were many ups and downs and the sand was deep in the final stage.

But Moreno is a great horse. His pulse rate after the final loop was very low. I think he is a true endurance horse,” said Milena.

“Next year this race is going to be a 120km FEI Two-star ride. The fixtures of the new season will be announced in January. Today’s ride was good well-organised and the weather was fine which was of great help to the riders and horses,” Ms Sawaya said.