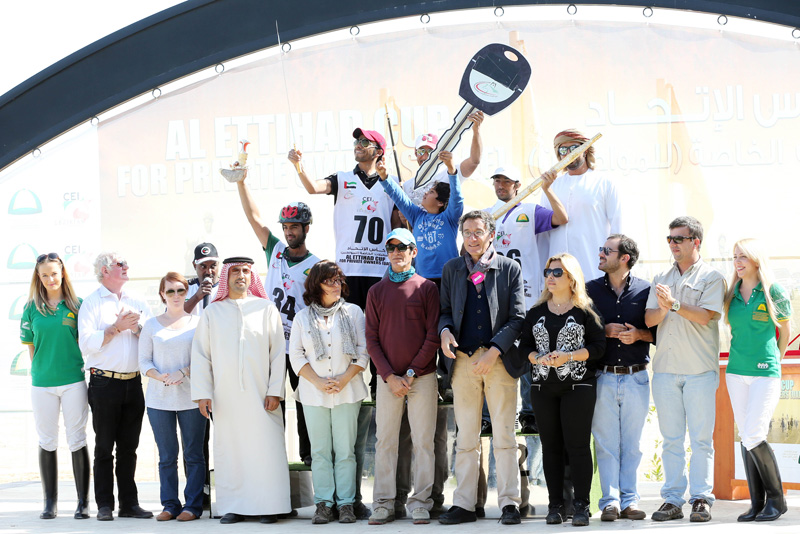 The Portuguese Consular Manuel Miranda alongside the organisor of the Portugal Endurance Ride which will be held under the patronage of the Shaikh Mansour bin Zayed Al Nahyan Global Arabian Horse Flat Racing Festival from April 25 to 27, 2014 have also attended the event.

Meanwhile, 84 riders from UAE and elsewhere started the race under ideal winter weather conditions, but only less than half of the field (34 riders) have completed the race or passed the final vet test.

Adnan Sultan, director of the Abu Dhabi Equestrian Club, Lara Sawaya, director of the HH Sheikh Mansoor bin Zayed Al Nahyan Global Arabian Horse Flat Racing Festival and chairman of the Ladies Racing Committee in the International Federation of Arabian Horse Racing Authorities (IFAHR) joined by the Portuguese Consular to the UAE Manuel Miranda, gave away the trophies and prizes to the winners.

HH Sheikh Mansoor bin Zayed Al Nahyan commented: “Equine sport is part of our heritage and culture the foundations of which have been laid down by late Sheikh Zayed bin Sultan Al Nahyan. And from that solid base, we are building on to preserve and promote our civilization by hosting various events on the horses’ back.

“The organisation of Al Ettihad Endurance Ride For the Private Owners Only is intended to provide the UAE national citizens and owners of the stables with the opportunity to take part in these races and to breed and acquire Arabian horses. The same applies to the flat races which have witnessed a huge jump in quantity and quality. Many of the private stables participate in the flat races as well.”

Speaking about the role and objectives of the festival, HH Sheikh Mansoor bin Zayed Al Nahyan said it has played a prominent role in promoting the UAE and encouraged the breeding of the Arabian horse worldwide.

“The invitation of 15 UAE lady riders to take part in the Portugal Endurance Ride scheduled from April 25 to 27 under the patronage of the festival falls within the strategy of encouraging the UAE women to make their mark in all fields and gain the experience of competing against high profile riders from the rest of the world in the buildup for the HH Sheikha Fatima bint Mubarak Ladies Endurance World Championship in order to fly the flag of their nation in this international arena,” he said.

In the meantime, Sawaya hailed the successful launching of the race in which the riders have produced high speed with a record number of participants representing the different private stables in the UAE.

“The race provided a good stage to promote the Portugal Endurance Ride through the invitation of the organising committee to witness the advanced organisational standards,” she said.

“A special news conference will be held on January 12 to announce the hosting of a new endurance ride this year which is unique of its nature in coordination with the FEI. The announcement will be made in coincidence with the release of the new season fixtures of the festival,” she confirmed.