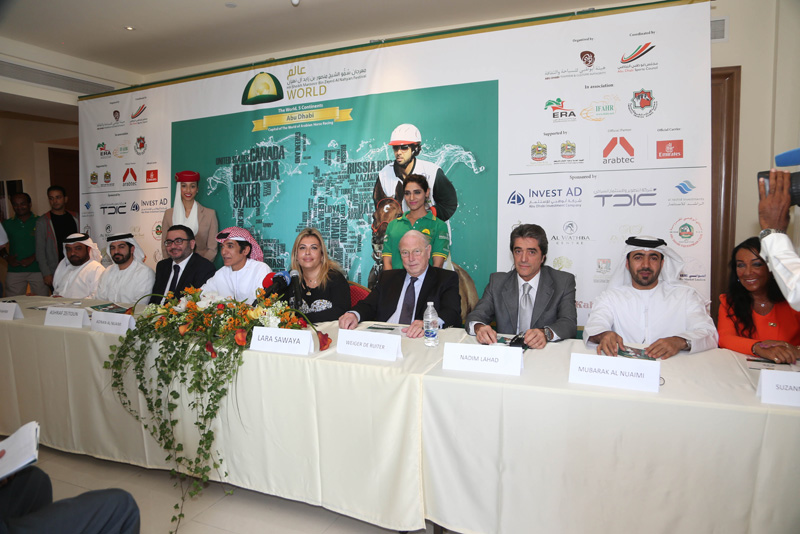 Abu Dhabi – After breaking new ground at leading racecourses around the globe, the HH Sheikh Mansoor bin Zayed Al Nahyan Global Arabian Horse Flat Racing Festival is all set to fly to new heights with jockeys from 72 countries kickoff the fifth edition of the richest Arabian horse racing on earth.

“We are grateful to HH Sheikh Mansoor bin Zayed Al Nahyan who has improved the quality of the Arabian horses by providing races from the grassroots. He has inherited the legacy of his late father Sheikh Zayed bin Sultan Al Nahyan to promote the Arabian horse,” said Wieger Joost de Ruiter, Chairman of the DARC and Treasurer of the world Arabian Horse Racing governing body (IFAHR) during a news conference to announce the new calendar of the festival at the East Mangroves Hotel on Monday.

“The fifth edition of the festival kicks start from the Al Flaij racecourse in Muscat, Oman on January 17 with the opening round of the HH Sheikha Fatima bint Mubarak Ladies World Championship (IFAHR),” Sawaya said.

“This season’s championship will be run in 13 rounds and culminates with the final round on November 9, at the Abu Dhabi Equestrian Club, in the world’s capital of Arabian horse racing,” she noted.

“The ladies series won’t be staged in Los Angles, but we will continue racing in the rest of the US, including San Francisco and Texas. Last season, one of the lady jockeys fell down, an incident which happens everywhere in horse racing. But, in all cases, new arrangements have been introduce to accommodate only amateur ladies who have scored at least five wins in their career and weighs 58kg,” she confirmed.

“Melbourne races are back on the festival’s agenda and the St. Moritz race on ice will be open for professional lady jockeys only due to the specialty of this kind of events,” she said.

“The first race of the Sheikh Zayed Cup will be held in Melbourne, Australia on February 1, with 13 rounds to be hosted this season including the Abu Dhabi final,” she noted.

“Each of the Wathba Stud Farm Cup races will carry the name of one of the festival’s sponsors,” she said.

“The 4 Int’l rounds will be staged on one of the major racing days in the said venues such as the German Derby, the Lockinge Stakes and the like,” she said.

“Points will be counted in each race for the training school to which the riders belong,and 30000 Euros to be given to 5 apprentice schools”,she said.
Regarding the HH Sheikha Fatima bin Mubarak Oscar Darley Awards, Sawaya said they will be staged at the Dolby Theatre, the home of the Oscar, at Hollywood and Highlight centre.

“We have increased the categories to 11 instead of six which will match the Oscar in numbers only and outclass it otherwise. There will be 3000 guests from the US and other parts of the world plus 14 judges half of them are involved in Arabian racing and the others are knowledgeable,” she said.

Speaking about the Arabian Horse World Conference London 2014, Sawaya said the announcement will be made on May 27 from the London House of Parliament and the welcoming dinner ceremony will be held at Banqueting House while the Gala Dinner will be launched at Guildhall.

“Here, we must thank the UAE Minsitry of Foreign Affairs for all the facilities which have been rpovided to make our job easier in all the World, she said.

“Around 400 guests including international breeders, experts, technicians, jockeys, trainers and scientists will gather at the St. James Theatre, London to discuss over four days various topics related to the Arabian horse industry. Outstanding scientists from the Liverpool John Moores University will present a unique study on jockeys’ weight losing without side effects. Other topics on the agenda will set sights on the future rather than looking back into the past,” she clarified.

Meanwhile, according to Sawaya, the details of the second edition of the HH Sheikha Fatima bint Mubarak EARS Conference for Education and Training will be held at the St Regis Hotel, Saadiyat, Abu Dhabi Nov 7 and 8.