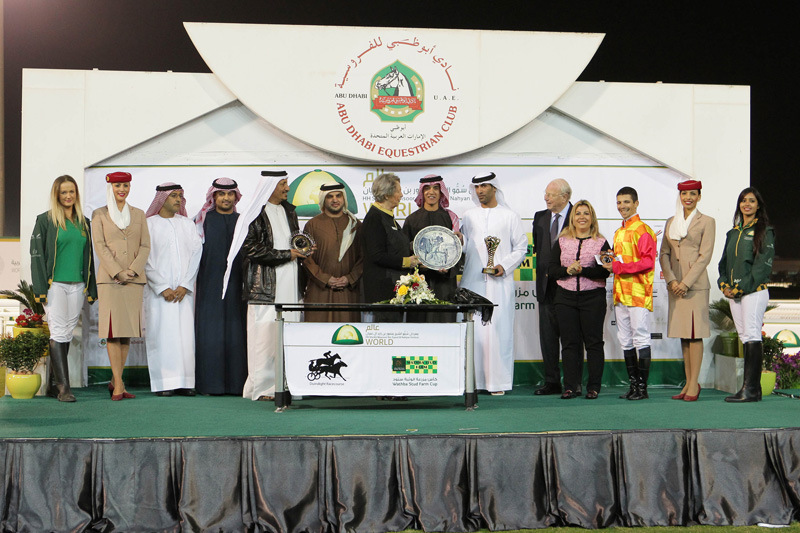 Abu Dhabi- Girl Power, ridden by Xavier Ziani, made virtually all to reverse places with earlier conqueror and hot favourite Safir Bainuna who chased the winner home in the 1600m Wathba Stud Farm Cup For Private Owners Only, the fifth event on the six-race-card at Abu Dhabi Equestrian Club here on Sunday.

“Last time out she finished second to Safir Bainuna in the same race over course and distance. I think she deserves to win. She has a good speed and didn’t need any assist,” Ziani said later.

Trainer Jamil Salman commented: “I think it’s great to see the mare bouncing back so quickly and reversing places with Safir Bainuna. Ziani gave Girl Power a great ride and the jockey and his mount have lived up to the challenge.”

Salman also thanked HH Sheikh Mansoor bin Zayed Al Nahyan, UAE Deputy Prime Minister and Minister of Presidential Affairs for providing the private stables with a chance to compete against each other in a separate race. “This is a great support for small breeders and owners and a strong boost for the Arabian horse industry within the UAE and abroad,” he added.

Elsewhere, Ragdan, ridden by Jesus Rosales, worked his way through in the concluding strides to land 2200m Madinat Zayed Purebred Arabians Handicap, the feature of the night. Burj Khalifa came with a late run under Daniel Muscutt to take second as the early leader and public favourite Takaamul (Paul Hanagan) was relegated to third.

“He didn’t start fast, but he picked up nicely and quickened in the last strides when a gap has appeared between the horses to storm home strongly,” the Latin American jockey said later.

The winner prevailed by a neck at the busy end after the smart eight-year-old son of former champion Nez’Dor has impressively got up to put his head in front under pressure when attacked by Burj Khalifa close home.

Leading English jockey Richard Mullen rode Moonlight Dash to land the final race, the 2200m Al Taweela TB Handicap, the only Thoroughbreds event on the card. Trained by Satish Seemar at Zabeel Stables in Dubai on behalf of Shaikh Maktoum bin Mohammed Al Maktoum, the well-bred six-year-old son of Monsun emerged the easiest of winners to prevail by more than four lengths before being eased on the line.

The second race, a 2200m Purebred Arabians Rated Conditions, was won by HK Ahlawiya (Erick Lemartinel/ Gerald Avranche) in a strong finish. The five-year-old Babi De Carrere mare was hard ridden in the crucial part of the trip to fly home unchallenged.

Champion Irish jockey Tadhg O’Shea claimed a long overdue victory on board Sheikh Down to deny MH Areeb by a short-head in a tight finish. O’Shea commented: “He’s a top horse. He went a good gallop and battled well when it mattered near post.”

“It’s the vision and directives of HH Sheikh Mansoor bin Zayed Al Nahyan, Deputy Prime Minister and Minister of Presidential Affairs to be wherever the Arabian horse is in action around the globe and lend a hand,” she said.

Dutch horses steal the limelight at the Hoppearten racecourse