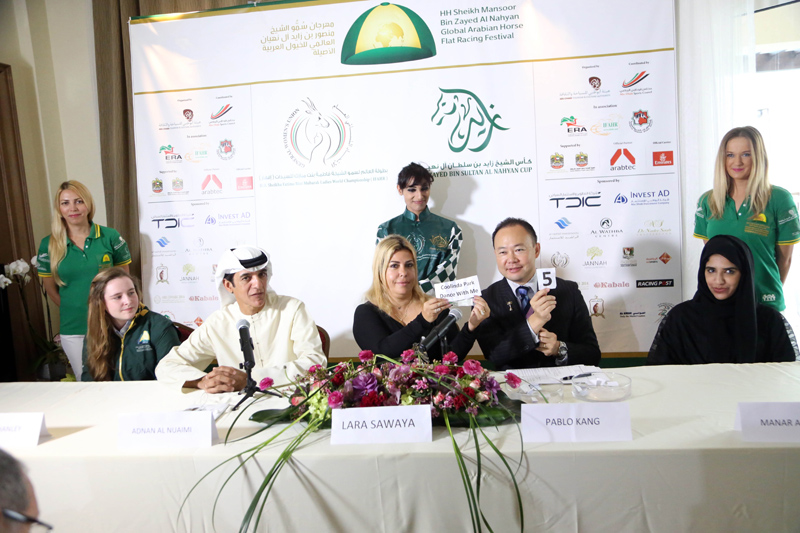 “I must have benefited from my first attempt at the Flaij Racecourse in Muscat last weekend and I’m now ready for the Australian challenge,” the young UAE lady said during the Draw Ceremony at the Eastern Mangroves Hotel here on Monday.

“There’s a long history of strong bilateral relations between our country and the UAE right from the agriculture up to the sports and defence cooperation.

“Arabian races are not very popular in Australia as the Thoroughbreds industry is dominating the scene, but with the bright vision of HH Sheikh Mansoor, this noble creature will receive the deserved attention of horse breeders, owners, racegoers and of course the organisers,” he said.

“We have huge investments by Godolphin and Shadwell, a few to mention, besides the sponsorship of the Emirates Airline of Melbourne Cup and other sports activities during the Spring Racing Carnival. Rugby, Cricket and tennis are among the international tournaments which attract the attention of the public. Football and cricket teams from the UAE and Australia exchange visits. Australia will host the 2015 AFC Asian Cup to which the UAE has already qualified. We have also few Australian players who are engaged with their UAE clubs in the Arabian Gulf League besides the horse racing commentator Terry Spargo who is also Australian,” he said.

Lara Sawaya, director of the HH Sheikh Mansoor bin Zayed Al Nahyan Global Arabian Horse Flat Racing Festival, chairman of Ladies Racing Committee in the International Federation of Arabian Horse Racing (IFAHR) said: “We are delighted to return to Australia after one year break due to reasons beyond our control. This time the Sheikh Zayed bin Sultan Al Nahyan Cup and HH Sheikha Fatima bint Mubarak Ladies World Championship will be staged at Caulfield Racetrack, one of the top venues within Australia and the rest of the world. The Arabian horse will be in action on one of the major racing days in Down Under as it’s the practice of the festival.”

“This time eight ladies will lineup at Caulfield racecourse, including two professionals from Korea and Australia. According to the new rules, every race will involve not less than eight contenders; two of them should be professionals. The Sheikh Zayed bin Sultan Al Nahyan Cup caries Euro35.000 in prize-money and Euro30.000 for the HH Sheikha Fatima Championship. The festival has provided Euro40.000 for the top five jockey clubs which collect more points, to be used for supporting the professional lady jockeys, over and above the Euro30.000 which goes for the amateur lady jockeys,” she added.

Regarding the HH Sheikha Fatima bint Mubarak Awards, Sawaya said all details would be revealed in a special news conference during the month of March.

“The event will be staged at the Dolby Theatre, the home of the Oscar, at Hollywood and Highlight centre.

“We have increased the categories to 11 instead of six which will match the Oscar in numbers only and outclass it otherwise. There will be 3000 guests from the US and other parts of the world plus 14 judges half of them are involved in Arabian racing and the others are knowledgeable,” she said.

Sawaya also introduced the 13-year-old Irish photographer Shamela Hanley who will be associated with the festival to grow up with it.