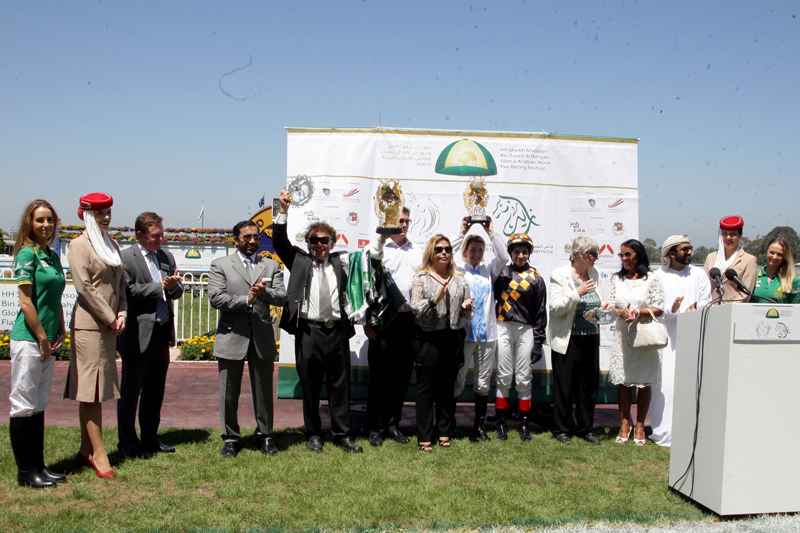 Melbourne- Australia – Conderosa Millenium Silver, ridden by Alyson Deniel, made every step a winning one to land the second round of the HH Sheikha Fatima bint Mubarak World Ladies Championship at the Caulfield Racecourse in Melbourne on Saturday afternoon.

Early in the afternoon, Aqaba Brown Dirt Cowboy got up under the Australian lady jockey Kati Spalding to pip the mount of Daniele Walker, Alchimia, in the concluding stages of the race and win the opening round of the Sheikh Zayed bin Sultan Al Nahyan Cup in great style.

“He carried me in a good trip and has never let me down when I have asked him to improve,” Katie said later. “This is my fifth win on board an Arabian horse. I have ridden four winners at Queensway, Gold Coast before and I don’t find any difficulty in handling this noble creature. It’s somehow slow in the start and up tide, but with practice it will be easy to handle,” she said.

Trained by Christine Willcox, the nine-year-old veteran son of Aqaba Captain Fantastic broke nicely and settled well in the early speed before he was put on top gear to sprint home easily.

In the HH sheikha Fatima bint Mubarak World Ladies Championship, the winner made virtually all and quickened in the last furlong to cross the finish line in spectacular performance.

“It’s a special championship and the organisational effort was amazing. This is my first appearance in the competition and fortunately it’s a winning start. The trainer told me before the race that Conderosa Millennium Silver is in great form and he will do all the work should I manage to follow the instructions,” she said.

Regarding the strong performance of the UAE inexperienced lady jockey Anoud Al Suwaidi, Deniel said she was astonished to see the Emarati girl chasing her home.

“I didn’t take it lightly and this was the only occurrence in which I had to use the whip. The response of the horse was amazing,” she added.

Anoud Al Suwaidi commented: “The strong run gave me more confidence and hopefully I can build on this success in my future attempts.”

“I didn’t expect myself to improve so fast. Coolinda Park Kazh was running green and this was his first start. He was a little bit hesitant at the gates and left the machines sluggishly, but after a while he settled well and picked up very nicely. At that stage, I had to come from the back of the field to launch my claim and surprisingly, the response was impressive when I have put him in the clear. He covered a lot of ground, but it was too late to match the winner,”she said.

Swedish former champion jockey Anna Sofia who supervises Anoud training was delighted and said: “Anoud is a smart young lady who’s learning very quickly. I didn’t expect her to make all this progress in such a short period of time. She has impressed me with her strong brain and determination to do something. The course is very difficult and her amount was a debutant. All these factors have contributed to the delay of the victory, but it will come during the current series” she said.

Mubarak Al Nuaimi, of the Abu Dhabi Tourist & Culture Authority said: “It’s a day to remember. We have been working very closely with the festival to promote Abu Dhabi as a tourist and commerce hub and our effort is paying off thanks to the directives of the HH Sheikh Mansoor bin Zayed Al Nahyan.”
Lara Sawaya, director of the HH Sheikh Mansoor bin Zayed Al Nahyan Global Flat Arabian Horse Racing Festival and chairman of the Ladies Racing Committee in the IFAHR said: “We are truly delighted to see this great start for the sixth edition of the festival and I’m confident that our impressive Anoud Al Suwaidi can go one better in the next challenge.

“The ladies race was absolutely superb. They have provided eight good horses. This championship is very important and valuable for us because it carries the name of the Mother of the UAE HH Sheikha Fatima bint Mubarak.”

“The first leg in Oman was won by Irish lady and here we have an English winner. The competition is unique and the prize-money is rising to Euro 35.000 for Sheikh Zayed bin Sultan Al Nahyan Cup and Euro 30.000 for the HH Sheikha Fatima bint Mubarak World Ladies Championship. This is over and above the Euro 40.000 and 30.000 bonuses for the jockey clubs of the top five professional and amateur lady jockeys respectively,” she concluded.