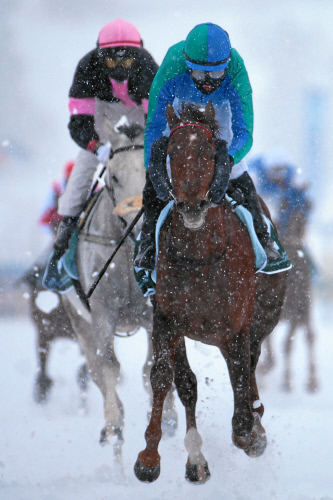 Dubai – Alibaba del Sol, ridden by Daniele Porcu came full of running in the concluding stages to beat front runner Phraseur Kossack with Stephen Hellyn in the saddle in an exciting finish the second running of the 1600m Sheikh Zayed bin Sultan Al Nahyan. Listed Cup on ice at the St. Mortiz White Turf on Sunday. The only Swiss entry and last year’s runner up Nil Ashal under Olivier Plaçais was relegated to third.

The race which was held as part of the HH Sheikh Mansoor bin Zayed Al Nahyan Global Arabian Horse Racing Festival carried the highest financial value of 42,000 Swiss francs (Euro 35.000) which were up for grabs.

However, the well-bred nine-year-old veteran is owned by Landgoed Waterland in Holland, trained by Miss Karin R van den Bos picked up nicely and pulled hard in the home turn to delight his connections.

“We are happy to see Alibaba del Sol winning on ice in this special racing event thanks to the support of the HH Sheikh Mansoor Festival,” said the winning trainer later. “We are regular participants in the races which are held under the umbrella of the festival and honoured to be associated with this great initiative of the leading international breeder and owner Sheikh Mansoor bin Zayed Al Nahyan,” she added.

The winning jockey Daniele Porcu commented: “It’s a great experience to race at St. Moritz where competition and fun are brought together to entertain holiday makers at this beautiful venue. Alibaba ran a cracking race and he has won impressively.”

Elsewhere, Maître de la Piste and Laurence Kindler were the surprising winners of the Grand Prix harness race, Bergonzi and Fadri Casty won the Skikjöring, Mario Cavigelli, the chairman of the Grison government, won the celebrity Skikjöring and trainer Philipp Schärer registered three victories – these are the headlines on an entirely snowy race day with no race track problems. 8,000 spectators bet a total of 53,414 Swiss francs.

The second harness race, the GP Data Quest, was won by Ramona Lap. The mare was trained and driven by Barbara Krüsi.

In the Credit Suisse – Grand Prix of Silvaplana, Mombasa and her driver Adrian von Gunten had to be satisfied with third place. Having lead throughout this time Bergonzi (trainer Philipp Schärer) and Fadri Casty from Zuoz were unbeatable. The duo thus laid the foundation for a possible win of the Credit Suisse Skikjöring Trophy. Between Bergonzi and Mombasa, Dreamspeed and Franco Moro occupied second place In the gallop races, the Grand Prix Christoffel Bau Trophy was the sporting highlight. Philipp Schärer trained the victorious Cap Sizun for the Hartmanns and provided a magnificent birthday present for the owner. Silvia Casanova lead in fine style with Weile in front of Song of Victory (Olivier Plaçais) and Syndic (Karin Zwahlen) in third place, who brought up the rear for a long time before coming back in fine style. Cap Sizun as well as Syndic are listed for the Gübelin 75th Grand Prix of St. Moritz.