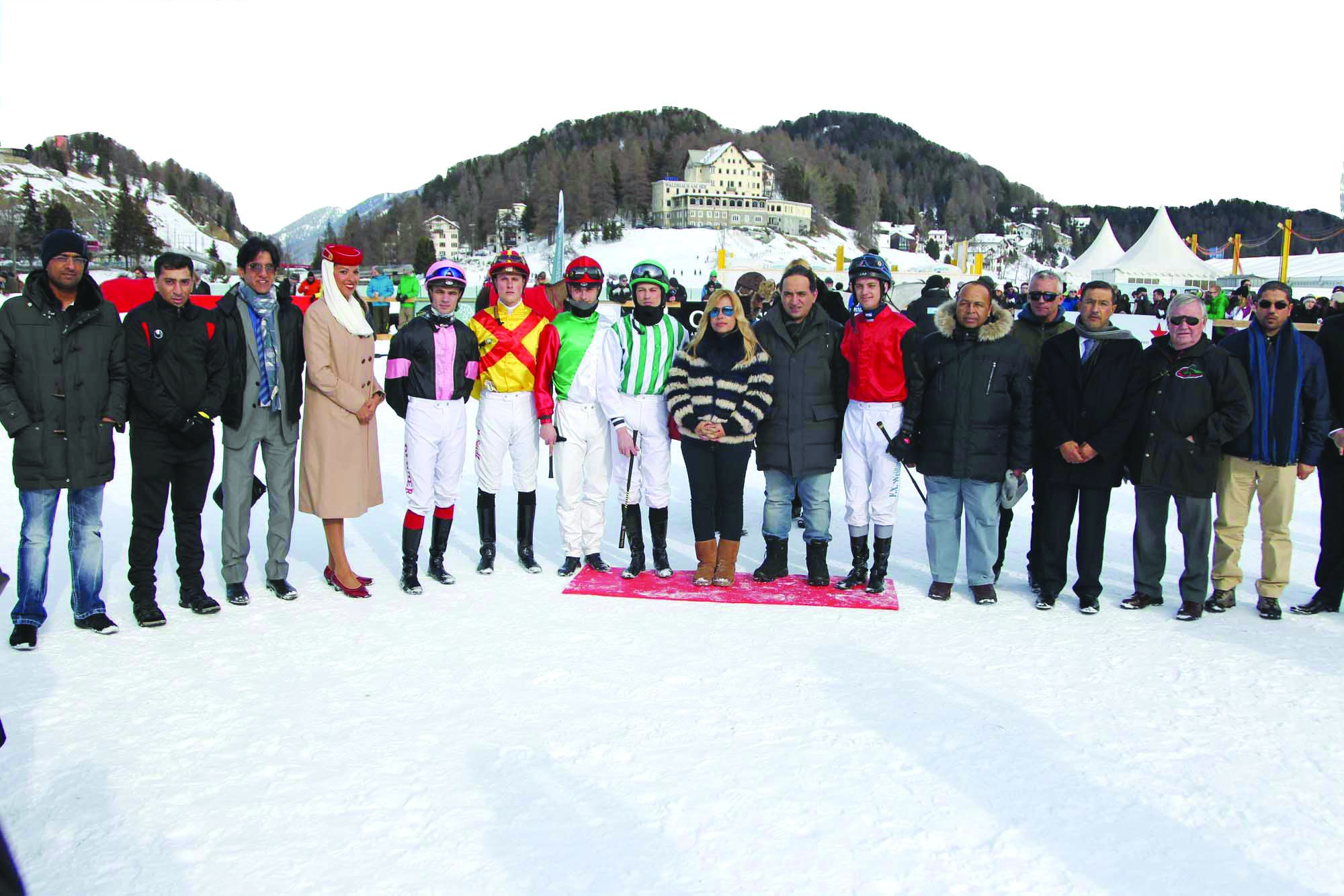 Dubai – The third round of the 1600m HH Sheikha Fatima bint Mubrak Ladies World Championship IFAHR will be run on ice for the first time with nine Arabian horses been declared to be ridden by professional lady jockeys to battle it to the wire in the Euro30.000 prize-money at the White Turf in St. Moritz on Sunday.

Phraseur Kossack heads the weights as the well-bred son of Prince O’rient ex Pengalia Kossack returns to the same track where he has delivered in the Sheikh Zayed bin Sultan Al Nahyan Cup last weekend.

Ridden by Stephen Hellyn, he sprinted home impressively to win by a length ahead of the fast finishing Alibaba del Sol and walks away with the major share of the 42.000 Swiss francs in prize-money.

But this time out, he will be partnered by the Swiss professional jockey Pauline Prodhomme for trainer Daniel C Klomp.

The Swedish contender Nil Ashal is looking forward to go one better after losing to Phraseur Kossack in the men’s competition and the connections are optimistic that he will have better luck with the Swedish girl Fabienne Ge Geer in the saddle.

The French representative Benben’Ba will lodge his claim from stall three under the strong drive of S. Slot. Debutant Italian horse Rosso Antico, ridden by the other Swiss jockey Silvia Cassanova is making his first appearance on the track and has a lot of work to do in order to figure in the placing.

The other participants include Winston Rocket, Lucy Alexander in the saddle, representing Sweden for owner Genberg & Co AB, Meduz, another Swedish contester to be ridden by Megan Carberry, Rahy, Magdalena Szabla rides, Amirador, Tamara Hofer up besides the German runner Zeta, to be driven by Anna Van Den Troost.

According to Mohammed Ebrahim Al Mahmoud, Deputy Chairman of the General Authority of Youth and Sports Welfare, secretary general of the Abu Dhabi Sports Council, the council is providing its full backing to all events which contribute to the revival of the country’s heritage and culture.

“The vision of HH Sheikh Mansoor bin Zayed Al Nahyan in supporting the Arabian horses through the festival has now turned global and put Abu Dhabi and the UAE in the mouth of everybody,” he said.

Mubarak Hamad AlMuhairi, Director General, Abu Dhabi Tourism& Culture Authority (TCA Abu Dhabi) said, “Ever since the HH Sheikh Mansoor bin Zayed Al Nahyan Global Arabian Flat Racing Festival was launched it has grown from strength to strength and this debut in ST Moritz is another feather in the Festival’s cap of success.”

Lara Sawaya, director of the HH Sheikh Mansoor bin Zayed Al Nahyan Global Arabian Horse Flat Racing Festival and Chairman of Ladies Racing Committee in the International Federation of Arabian Horse Racing Authorities (IFAHR) commented: “Under the directives of HH Sheikh Mansoor bin Zayed Al Nahyan, UAE Deputy Prime Minister and Minister of Presidential Affairs, the race will be held on ice for the first time with professional lady jockeys on the backs of the Arabian horses. It’s a huge jump and exceptional initiative to promote the Arabian horse and the ladies races.”

Sawaya also noted that all preparations are well in place for the HH Sheikha Fatima bint Mubarak Darley Awards at Dolby Theatre, the home of the Oscars in April.