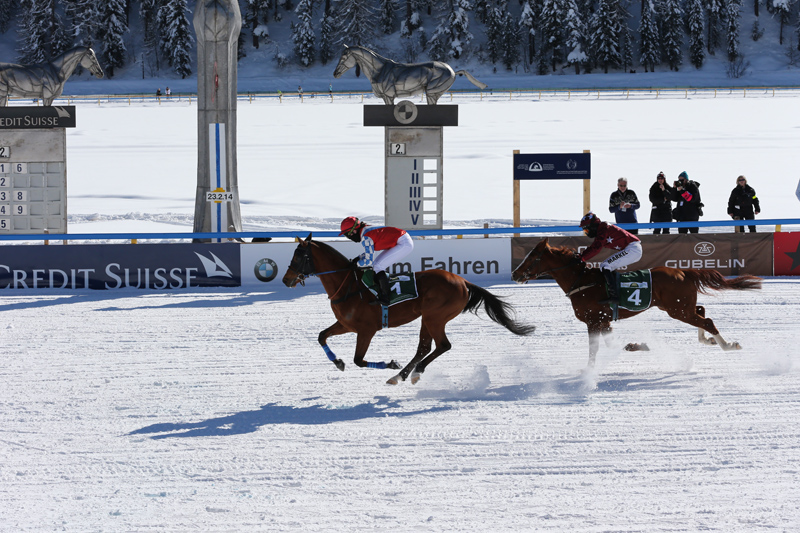 Dubai – Phraseur Kossack, ridden by Prod’Home Pauline, left the machines very quickly and kicked away from field to land the third round of the HH Sheikha Fatima bint Mubarak Ladies World Championship at the St. Moritz White Turf on Sunday. Winston Rocket chased the winner home to finish two lengths back in second place under Alexander Lucy as Nil Ashal, De Geer Fabienna as a four lengths behind in third place.

The race was contested over a mile as part of the Sheikh Mansour bin Zayed Al Nahyan Global Arabian Horse Flat Racing Festival and attracted a quality field of seven Purebred Arabian runners going to post.

It’s my first ride on ice,” said the French lady Pauline who guided the winner home. “Phraseur Kossack is a classy horse who has won the Sheikh Zayed bin Sultan Al Nahyan Listed Cup over course and distance last weekend. He started well and has always surprised me. He was picking up nicely and responded keenly when I have asked him the question in the straight to emerge the easiest of winners on the line,” Pauline added.

“We are delighted to see this strong backing from the festival and HH Sheikh Fatima bint Mubarak, Mother of the UAE for her great intiative,” said the horse owner saying that the Arabian horse industry is flourishing thanks to the vision of HH Sheikh Mansoor bin Zayed Al Nahyan.

Ahmed Al Shamsi, Charge De Affairs of the UAE embassy in Bern, Switzerland has attended the race and commented:

“The wise leadership of His Highness the President Sheaikh Khalifa bin Zayed Al Nahyan and His Highness Sheikh Mohammed bin Rashid Al Maktoum, UAE Vice-President and Prime Minister and Ruler of Dubai and their brothers the Rulers of the Emirates for their great support of sports in general and equine sports in particular.

I’m truly impressed with what I have seen in front of me. This is a great success for the brilliant vision of HH Sheikh Mansour bin Zayed Al Nahyan and the initiative of HH Sheikha Fatime bint Mubarak, Mother of the UAE,” he said.

Adnan Sultan, director of the Abu Dhabi Equestrian Club echoed the same opinion and added that he’s honoured to be eye witness to the progress of the festival day after day.

“We are delighted to see the Arabian horse in action in almost all of the race tracks around the globe and this is a great achievement by itself,” he added.
Lara Sawaya, Director of the HH Sheikh Mansoor bin Zayed Al Nahyan Global Arabian Horse Flat Racing Festival and Chairman of Ladies Racing Committee in the International Federation of Arabian Horse Racing Authorities (IFAHR) commented: “Under the directives of HH Sheikh Mansoor bin Zayed Al Nahyan, UAE Deputy Prime Minister and Minister of Presidential Affairs, it has been decided to give the lady jockeys to ride on ice at this historic place. We are happy to see the jockeys riding courageously and emulating the same performance of the men who rode at this beautiful venue a week ago.

“The race has started big and there’s more to come under the umbrella of the festival. The racing community worldwide is obliged to HH Shaikha Fatima bint Mubarak, Mother of the UAE, for availing the professional jockeys the opportunity to be part of this unique event.”