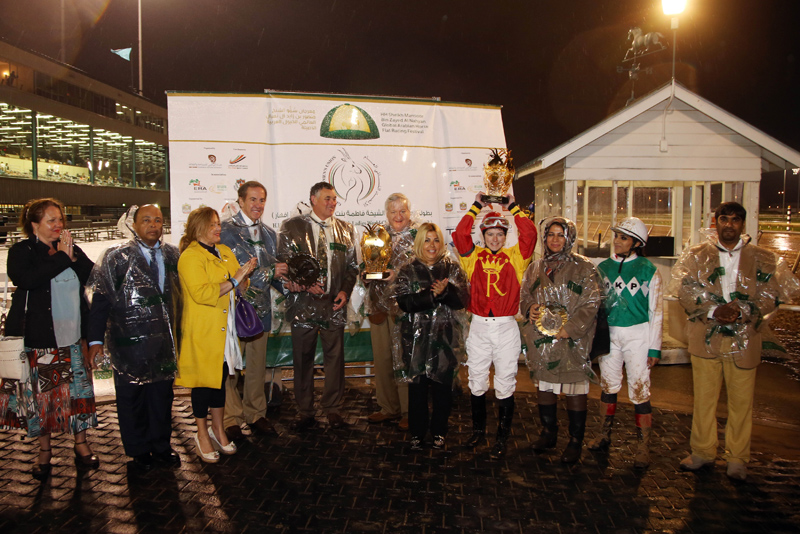 And despite the heavy rain showers which hit the place since early in the afternoon, Grilla was given everything to make his way thorough and prevail by four lengths before being eased near post. RB Champagne Taste chased the winner home under Gerardo Mora, but didn’t disturb the leader as Burning Fleet, Emesto Valdez up, walked away with the third place trophy.

Elsewhere, Sandee Martin booked the fourth ticket to a dream finale of the HH Sheikha Fatima bint Mubarak World Ladies Championship IFAHR in Abu Dhabi, the world’s capital of the Arabian horse racing. The brilliant lady put her mount into the clear and RB Burn Baby Burn made every stride a winning one to lead by a length in the shadow of the post. Silja, representing Norway, finished second on board MS Dixie and behind them came Stephanie Dorning on board Zekks Follies.

Sawaya commented: “The festival is making steady progress and advancing from one success to another. It began to pay off. Now, the Sheikh Zayed bin Sultan Al Nahyan Cup is a Grade-1 event. We have started with a listed competition before being promoted to Grade-2 thanks to the increased prize-money and the improving form of the horses making the lineup.

“The fourth round of the HH Sheikha Fatima bint Mubarak (Mother of the UAE) World Ladies Championship IFAHR has attracted 11 Arabian horses ridden by 11 girls from around the globe. The great form of the horses in contention gave the races all the excitement and thrill that we have been watching to underline the high profile of the festival. All persons involved in the Arabian horse industry were in attendance to watch the race and this in turn will have its positive impact on the promotion of this noble creature. The vision and foresightedness of HH Sheikh Mansoor bin Zayed Al Nahyan and the unlimited support of HH Sheikha Fatima bint Mubarak, Mother of the UAE, have paid dividends in the process. We are also delighted to have Noura Al Suwaidi in Houston to follow up the girls and ensure their comfort, but she had to return home before the race due to personal commitments.”