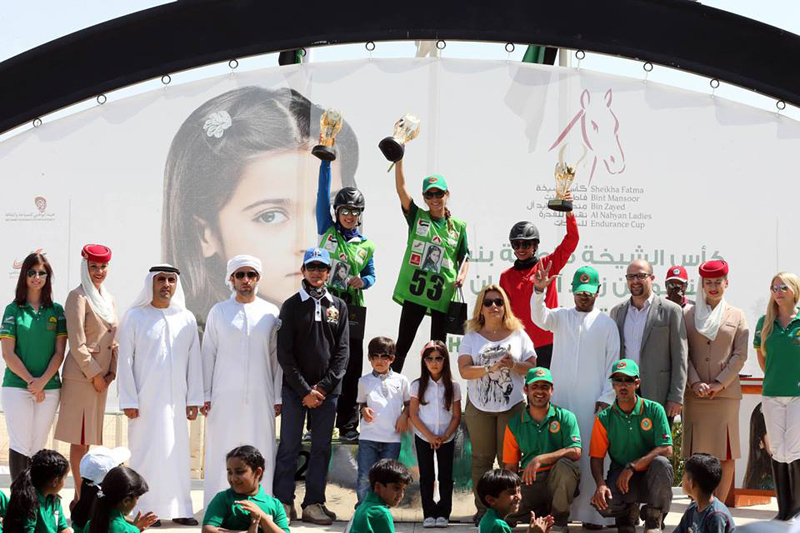 Friday’s CEN 100 KM Endurance Ride was run in four stages of 33kms, 27kms, 24kms and 16 kms. The riders who have completed the race shared the Dh 500,000 on offer and the winner drove away a brand new car. The Emirates International Endurance Village wore a festive look with hundreds of children making the most of the ‘Fatma Wathba Land’.

A little change in the order happened as the riders approached the the second Vet Gate. Al Mutawa continued to lead, but Shaikha Shamsa Humaid Al Shamsi advanced to second and Mouza Sulaiman Eidha Alseiari was relegated to third. Meanwhile, the Spanish rider Laia Soria Pinol made a smooth progress to take second just behind the early leader Al Mutawa and ahead of Shaikha Shamsa Humaid Al Shamsi as the riders completed the third loop and began to prepare for the final challenge.

Meanwhile, Sawaya noted that the participation of 88 riders is another evidence of the success of the event in achieving its goals in spreading the equine sport and attracting more lady riders to practice. “This is in fact the ultimate target of the festival and the directives of HH Sheikh Fatima bint Mubarak, Mother of the UAE, to encourage and support women sport. The strong presence of the girls students and their families to attend the entertainment program which was organized on the sidelines of the race at the Fatma Wathba Land has also added colour to the affair. Twenty iPads which were provided by the festival were also drawn,” she said.