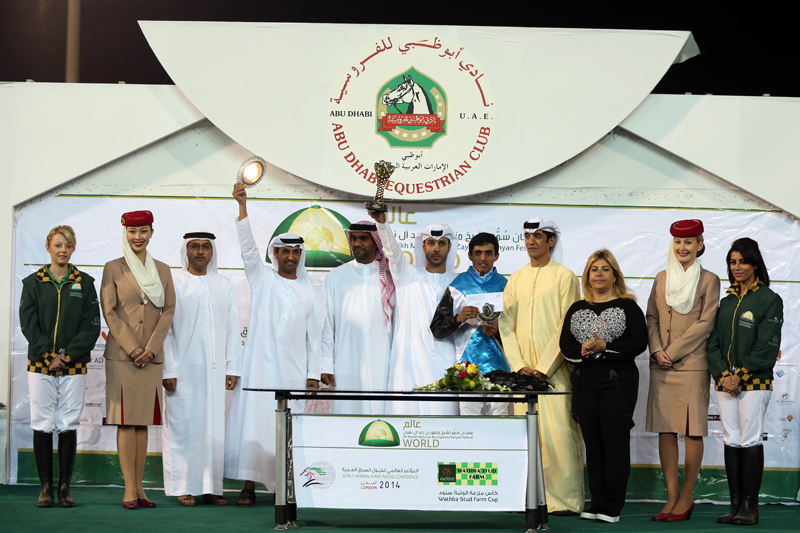 Abu Dhabi – The horses of HH Sheikh Mansour bin Zayed Al Nahyan, UAE Deputy Prime Minister and Minister of Presidential Affairs made history after scooping the seven Group-1 titles of the Arabian races of the season.

Trainer Majed Al Jahouri saddled Musharab to retain the crown of the 2200m Emirates Championship, the highlight of Abu Dhabi’s final meeting of the season in the distinguished silks of HH Sheikh Mansoor bin Zayed Al Nahyan, on Sunday evening, for the second straight year.

Harry Bentley was in the saddle last year, but it was Pat Cosgrave who did the better work ahead of front runner Naseem, ridden by Bentley last time out.

In the meantime, local apprentice Saeed Al Mazrooei continued his good weekend, after victories at Al Ain on Friday and Sharjah on Saturday, when making all on the Ahmed Al Mehairbi-trained Day Breaker to claim ghe Wathba Stud Farm Cup for Private Owners only, a 1600m conditions race.

The jockey said: “It has been a great three days and a good season. I won on this horse in February and he has fought hard today to win this.”

The Thoroughbred equivalent, the Group 3 Abu Dhabi Championship over the same 2200m, produced a thrilling finish with Jamr leading in the final strides to deny Mushreq in a photo. Ridden by Adrie De Vries, Jamr was held up in rear, but always seemingly travelling strongly, but still had a lot do as the runners entered the straight.

They combined to win the 2200m UAE Arabian Derby with Nymphea Du Paon, bringing her dramatic season to a perfect conclusion.

A Group 2 winner in her native France, she made a winning local debut in the Listed Abu Dhabi Championship in December. She was then first past the post (subsequently disqualified) in the opening round of the Arabian Triple Crown, before winning the middle leg and awarded the concluding leg by the stewards.

Thirty minutes earlier, O’Shea produced Sheikh Down about 100m out to deny stable companion Gali Rich in a 1600m handicap. Gali Rich and Daniel Muscutt had hit the front 300m out, sweeping past Oertel’s third runner, TM Junior Johnson, but Muscutt’s mount had no answer to the late challenge of Sheikh Down.

The meeting opened with a 1400m maiden, won by the Jaber Bittar-trained Hadreej, produced to lead about 100m out by Jesus Rosales and opening his account at the 16th attempt.

Settled in midfield in the early stages of the race, Bittar’s mount made smooth progress 500m out and the pair ran on strongly to deny Dere’A Al Jazeera who looked the likely winner when hitting the front 300m from home.

Lara Sawaya, director of the HH Sheikh Mansoor bin Zayed Al Nahyan Global Arabian Horse Flat Racing and Chairman of Ladies Racing Committee in the International Federation of Arabian Horse Racing Authorities (IFAHR) said: “Hollywood is on full alert for the long awaited HH Sheikha Fatima bin Mubarak Oscar Darley Awards, Sawaya said they will be staged at the Dolby Theatre, the home of the Oscar, at Hollywood and Highlight centre on April 4 while the Gala Dinner will follow on April 5 at the Beverly Hills with both events being streamlined live on Abu Dhabi Sports Channel. The events coincides with the celebrations of the 27th anniversary of the Hollywood Oscar. “We have increased the categories to 11 instead of six which will match the Oscar in numbers only and outclass it otherwise. There will be 3000 guests from the US and other parts of the world plus 14 judges half of them are involved in Arabian racing and the others are knowledgeable,” she said.

“Under the directives of HH Sheikh Mansoor bin Zayed Al Nahyan, the top three finishers in the UAE Arabian Derby, Emirates Championship and the Abu Dhabi TB Championship, including representatives for the owners, besides trainers and jockeys are invited for the World Arabian Horse Conference London 2014 from June 27 to 30, 2014. The owners’ title holder of the Wathba Stud Cup for the second year Khalid Khalifa Al Nabooda besides the most winning trainer and owner are also invited to attend the conference,” she confirmed.