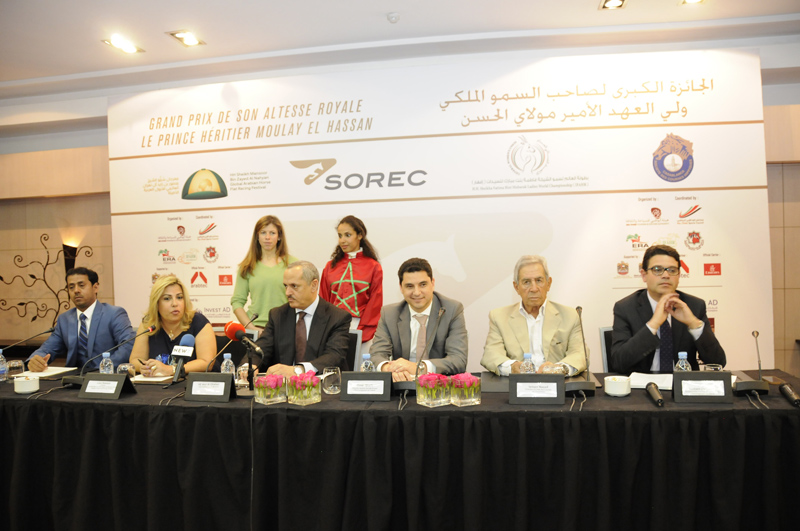 Casablanca – Morocco: Top international lady jockeys representing UAE, Morocco, Oman, Europe and elsewhere are set to battle it to the wire in the fifth leg of the 2014 renewal of the HH Sheikha Fatima bint Mubarak Ladies World Championship (IFAHR) at the Casablanca-Anfa Racecourse here on Friday.

The event is held under the umbrella of the HH Sheikh Mansoor bin Zayed Al Nahyan Global Arabian Horse Flat Racing Festival as part of the Grand Prix de SAR Al Tesse Royale Le Prince Heritier Moulay El Hassan to be contested over nine and a half furlongs and carries a total purse of Euros30.000.
UAE’s hope Anoud Al Suwaidi partners Ahdab BZ and lodges her claim from stall 11 as the Moroccan lady jockey Bouchra Narmoul makes her career’s debut onboard Azag BZ and jumps from gate 13.

Meanwhile, the only two professional jockeys; Germany’s Hofer Tamara astride Saqr II and Korea’s Keumjoo Lee, aboard Kanzaman, have been drawn in stalls 1 & 2 respectively.

According to the UAE ambassador to Morocco Alsari Saeed Al Dhahri, the support which is received by sports sector in the UAE underlines the keenness of the wise leadership of His Highness the President Sheikh Khalifa bin Zayed Al Nahyan and his brother His Highness Sheikh Mohammed bin Rashid Al Maktoum, UAE Vice-President and Prime Minister and Ruler of Dubai and General Sheikh Mohammed bin Zayed Al Nahyan, Crown Prince of Abu Dhabi, Deputy Supreme Commander of the UAE Armed Forces coupled with the role which is played by Sheikh Mansoor bin Zayed Al Nahyan, UAE Deputy Prime Minister and Minister of Presidential Affairs to promote sports in general and Arabian horse races in particular.

Speaking to newsmen at the Casablanca Grand Hayatt on Wednesday, Al Dhahri said: “Staging the fifth round of the HH Sheikha Fatima bint Mubarak Ladies World Championship (IFAHR) in Morocco is of great essence for the women sports in the world in general and within the UAE and the Arab world in particular,” he said.

Meanwhile, Sawaya announced that, all the 13 girls who will be riding on Friday are also invited to attend the final in Abu Dhabi in November.

“I would like to thank Her Highness Sheikha Fatima bint Mubarak, Supreme Chairperson of the Family Development Foundation, Chairperson of UAE Women’s Federation, Mother of the UAE, for her generous patronage of the series which carry the name of her highness. The support of HH Sheikha Fatima for the UAE women has enhanced their status and established a strong base for the women Arabian horse races worldwide,” she said.

“We are truly delighted to have a Moroccan lady jockey for the first time in the lineup. Bouchra Narmoul will be flying the Moroccan flag in the competition and this is a good sign that the championship is well on the track. The objective of HH Sheikha Fatima bint Mubarak, Mother of the UAE, is to see lady jockeys from the Arab world showing the best of them in all sports arenas,” Saway added.

“And bringing this highly prestigious race of the series to Morocco to be held on the International Day of Purebred Arabian Horse Racing is a new breakthrough to promote this noble creature and the Moroccan races as well.

“It’s a great pride for the festival to see 13 lady jockeys from around the world gathering for a dream lineup in the world’s richest ladies horse race at this beautiful venue,” she said.