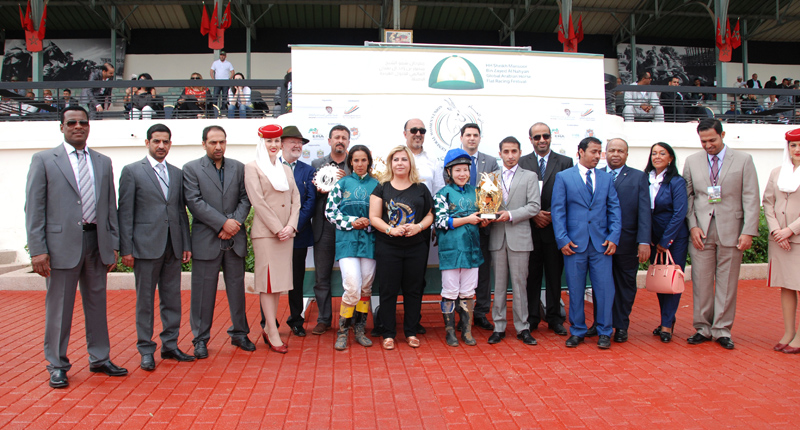 Leading German professional jockey Hofer Tamara chased the winner home to finish three quarters of a length behind in second place onboard hot favourite Saqr II as Moroccan debutant Bouchra Marmoul came with a late run to take second on the line astride Azaq Bouznika. The two horses went strike for strike in the final 150 yards, before the winner surged ahead to storm home impressively.

“I have followed the instructions of the trainer who told me to track the leading pair and put my mount into the clear to hit the front at the home turn and the strategy did work,” the South Korean young lady said.

“This is my first appearance in this great competition. I’m truly indebted to HH Sheikha Fatima bint Mubarak for bringing girls from around the globe to compete at this beautiful venue,” she added.

However, it happened that the best two horses were ridden by the two professional jockeys and as it was speculated they have simply kicked away from the pack in a two-horse race to cross the line a long way ahead of the rest of the field.

T. Hofer who took second admitted that she was beaten by a better horse. “The trainer told me to hold my mount and he will do all the work in the straight, but the winner was too good,” she added.

UAE hope Anoud Al Swiaidi partnered Ahdab Bouz to finish sixth. “It was a good effort under the difficult situation which has resulted out of the heavy kickback of the dirt track. At one stage I had to close my eyes and drive blindly after having consumed all the glasses,” she said.

“The trainer told me to race from the centre of the field and Ahdab Bouz will pick up nicely at the home straight. Unfortunately, the heavy traffic forced me to drop back to the rear of the field. This was not the plan for him, but it came to happen. Things began to improve in the final stages, but it was too late to catch up,” she added.

Meanwhile, Moroccan jockey Bouchra Marmoul was over the moon after she got up to take third close home.

“The pace was too fast and my horse didn’t start as good as I have expected him to do. He was a little bit reluctant and slow moving and I had to ride him patiently. But, with the progress of the race he began to pick up and showed good desire to improve,” said a jubilant 22 young lady later.

“I think it was a very tough race. It’s good news to impress on debut and I’m really happy to see all this big crowd standing behind me and cheering me all the way,” she concluded.

“It’s unbelievable to see this Korean lady winning in Africa and the young Moroccan jockey finishing good third on her debut. The German lady who has also finished second came with 36 wins under her belt out of 360 starts at 10 percent striking rate. This is impossible!” she said.

“HH Sheikh Mansoor bin Zayed Al Nahyan, UAE Deputy Prime Minister and Minister of Presidential Affairs is giving all his support to the women’s sport which has its positive impact on the whole society,” she concluded.