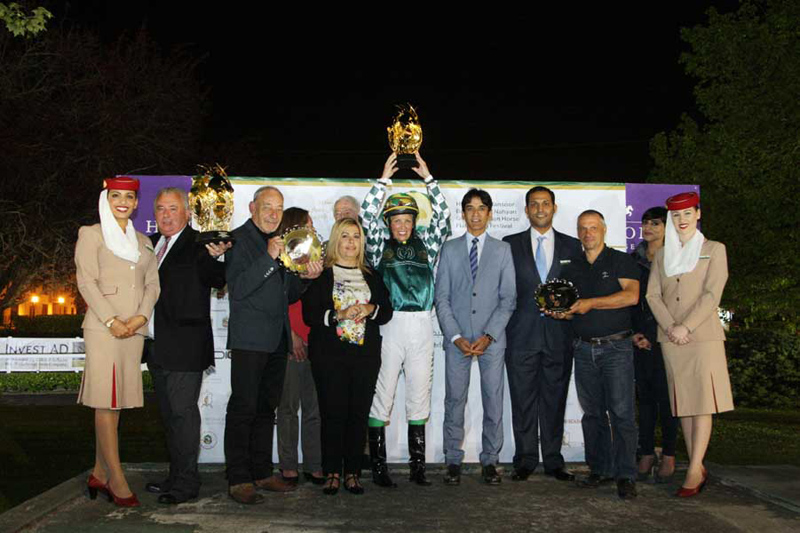 Toulouse – France: Eight runners have been declared to kick off the fifth leg of the HH Sheikha Fatima bint Mubarak Ladies World Championship (IFAHR) as a small field of five runners makes the lineup for the fourth round of the Sheikh Zayed bin Sultan Al Nahyan Cup (Group-2) at the Hippodrome de Toulouse here on Friday.

Heading the weights is L’edettede Loguimchi, ridden by the Belgium lady jockey Gaelle Gernay, a 23-year-old student who has won seven races out of her 27 starts at an amazing 27 percent striking rate. Other riders include: Ingrid Grard (France) on board Formi AP Lawuy, Germany’s Eva Maria astride Amaan, Ireland’s Nadine Forde aboard Haydai AP Khaledah, Italy’s Jessica Marccialis on Jadeer, Norway’s Victoria Allers (Nahee), Oman’s Azhar Al Wardi (Awhein), and Hungary’s Alexandra Bihari on the back of Vulcair des Valettes.

Lara Sawaya, director of the Sheikh Mansoor bin Zayed Al Nahyan Global Arabian Horse Flat Racing Festival and chairman of the Ladies Racing Committee in the International Federation of Arabian Horse Racing Authority (IFAHR) commented: “In fact, 11 runners have been entered for the race, but the number was reduced to eight for one reason or another.”

Furthermore, the prize-money of the HH Sheikha Fatima bint Mubarak Ladies World Championship has been cut down by the (AFAC) to Euro20.000 instead of Euro30.000 and similarly the Euro 35.000 prize-money for the Sheikh Zayed bin Sultan Al Nahyan was brought down to Euro25.000.

Meanwhile, the France Gallop has declined to license the UAE lady jockey Anoud Al Suwaidi for the ride pursuant to its bylaws which stipulate that only jockeys with five starts should be permitted to take part in any race within the French soil.

Al Suwaidi who has arrived in Toulouse with her Swedish trainer Anna Sofia from Abu Dhabi on Wednesday said: “Rules are the rules and nobody can help it. I have to abide by the regulations though I’m truly sad to miss the experience of riding in France. I have prepared myself for the challenge, but hopefully I will benefit from visiting the venue and watching the race from the grandstand before I return to this beautiful place next year.”

The amateur Emarati jockey made her debut at the Flaij Racecourse in Oman in January and finished last of all. But, she improved to finish second at Caulfield, Australia few days thereafter. In Huston, USA, she finished in the middle of the field on her first experience on dirt and took sixth in Casablanca-Anfa on her most recent appearance where her mount was caught in the traffic at midway.

The first leg of the 2014 edition of the championship was held at Al Flaij racecourse in Oman and was won by the Irish lady Evanna McCutcheon. British jockey Alyson Deniel has claimed the second leg at Caulfield in Australia, the French lady Prod’Home Pauline prevailed on ice at the St. Moritz in Switzerland in the third round of the championship’s series, and the Korean debutant Keumjoo Lee did the better work in Casablanca to become the fourth nominee for the grand finale of the competition in Abu Dhabi later in November.

Sayawa regretted the situation, but she urged the Emarati lady to benefit from the experience.

“I would like also to than HH Sheikha Fatima bint Mubarak, Supreme Chairperson of the Family Development Foundation, Chairperson of the UAE General Women’s Federation, Mother of the UAE, for her generous patronage of the championship which is paying dividends at all respects,” she concluded.