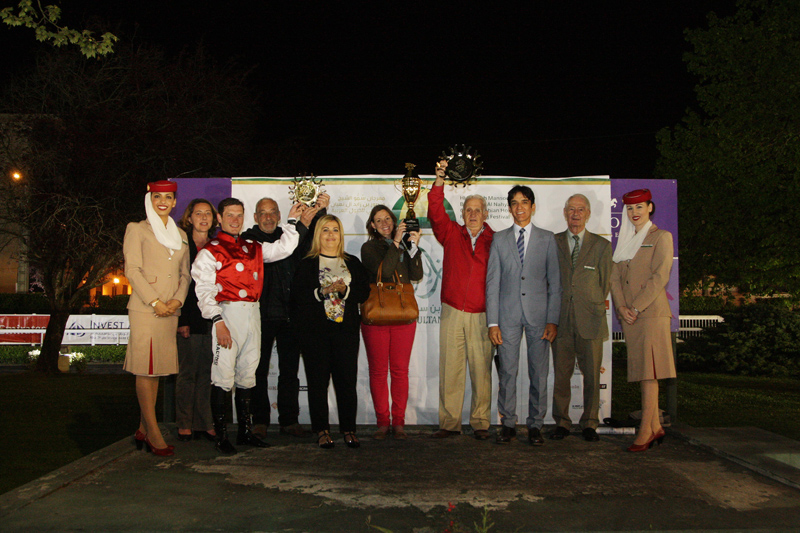 “Nahee is a great mare and she was always surprising me,” said a jubilant young lady after claiming the sixth spot in the grand finale of the world’s richest ladies horse race to be held in Abu Dhabi later in November. “She was full of running when the starter said go, and she did all the work when I have asked her the question in the straight. My effort was to make her settle behind the leading pair before I have shaken the reins in the concluding two furlongs and she picked up impressively,” the Norwegian amateur jockey said later.

The winner covered the mile distance in 1.44.35 seconds and prevailed by more than two lengths before being eased near post.

Later in the evening, top French jockey Jean-Baptise Hamel rode Sir Bani Yas to land the fourth round of the Sheikh Zayed bin Sultan Al Nahyan Cup in great style. The four-year-old son of Amer settled at the tail of the compact field as stable companion Abu Alabyad set a steady pace under J-B Eyquem before the Frenchman pushed the button to emerge the easiest of winners on the line. Sir Bani Yas won by a length and a quarter ahead of the Qatari contender Al Saklawiya. The speedy colt covered the mile and a quarter distance in 02.14.37 seconds.

Trainer Jean-Francois Bernard who’s looking after Sir Bani Yas on behalf of His Highness the President Sheikh Khalifa bin Zayed Al Nahyan commented: “He’s a progressive kind of horses and there’s more to come from him. Sir Bani Yas is a tough battler and strong stayer and we expect to show the best of him in the big challenges ahead.”

But Bernard declined to set a target for his colt saying that everything depends on how he would come out of the trip pointing out that there are many options open for him. “We are at the beginning of the season, but the World Cup would be one of the obvious targets,” he said.

“The festival has also broken new grounds by staging the Wathba Stud Farm Cup races in Slovakia for the first time, to become the first-ever Arabian event to be hosted by that country. And this season, we have a very busy schedule which features over and above the races and the World Arabian Horse Conference in London, five endurance contests scattered around the old continent under the umbrella of the festival. These include the CEI Atolerios Portugal, the HH Sheikha Fatima bint Mubarak Ladies Endurance CEIO Cup, the 120km ** Open Endurance Cup in Verona Italy, the Compiegne France Festival, the European Championship for young Riders Verona, Italy, the HH Sheikh Mansoor Festival Endurance Cup for Arabian Horses Ridden Endurance 100km * in London, the World Championship Horses in Slovakia 2014,” she said.

We are truly obliged for the Mother of the UAE for her great initiative and support to the women of the UAE and the world at large. We will be taking seven UAE girls with us to compete in Portugal, and the best five finishers out of them will proceed to London to take part in the HH Sheikha Fatima bint Mubarak Ladies Endurance CEIO Cup on June 1,” she added. The girls are Aya Abdel Redha, Afra Al Souweidi , Ayesha Al Romaithy , Alia Al Khafaji , Shathra Al hajjaj , Reen Shaaban , Mayssa Al Braiki.