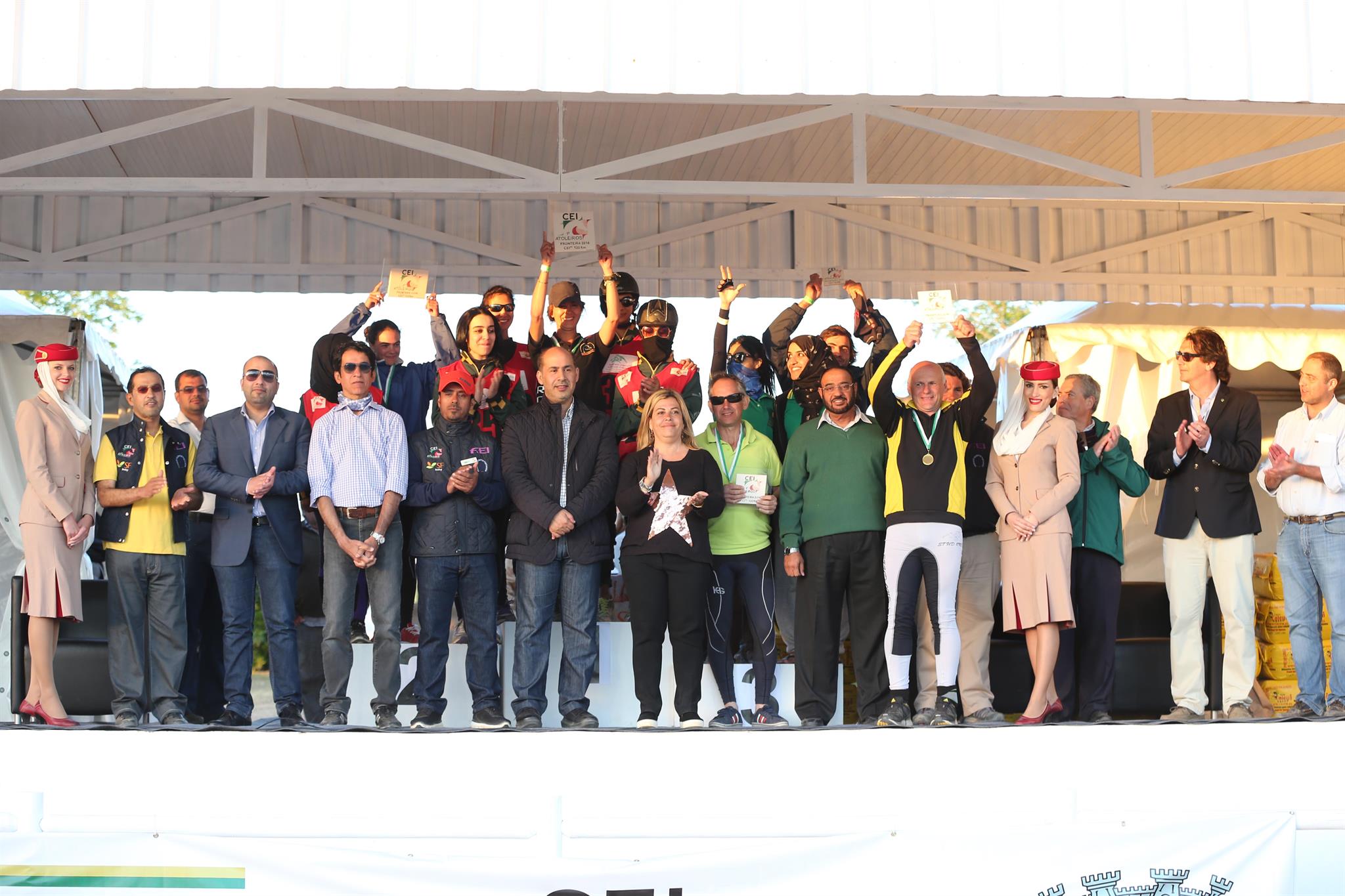 Fronteira- Portugal: Villalon Torres, on board Nabuco, led a 1-2 finish for the Spanish riders in the CEI**Atoleiros endurance race, the highlight of the second day of the National Equestrian Endurance Championships at the border riding centre here on Sunday. Parejo Gutierrez Loal, riding Beader was second and behind them finished the French contender Joel Marescassier aboard Djitane De Leyre.

UAE lady rider Ayesha Darwish Al Romaithi showed the way in the first three loops and dropped to fifth in the fourth vet gate, before being disqualified after unfortunate fall. Shathra Al Hajjaj, the most illustrious rider of the team retired after vet gate three on veterinary grounds. The remaining five lady riders have completed the race to fill in the minor places in their first international exposure in a competition of such magnitude.

In the CEN* Ride, Joao Augus Noura, astride Repoker did most of the work to cruise to a clear cut victory in front of Anna Darbas aboard Bab Al Shams. Marco Sardo partnered Outsider to walk away with the third place honours.

However, it was Ayesha Darwish Al Romaithi, who took her mount Xarazan Da Tapada to set the early pace and covered the first 28.3km blue loop in one hour, 24 minutes and 26 seconds at an average speed of 19.140km/hour. In the second place was the Spanish contender Carrera Miguel Rodriguez, on board Vince RC who was approximately four minutes off the pace. Right on her heels was compatriot Villaon Aurora Torres who rode Nabuco to take third as four Spanish riders were pressing on the UAE lady while she was struggling to maintain her lead despite the tough terrain.

“It’s a challenging track,” said the technical delegate Abdul Aziz Sheikh. “The course is partly a valley and the surface is uneven. In some areas there are stones, holes and muddy ground. The track is not very wide. It’s true that the riders were racing through green valley but the surface is not green at all. The underfoot condition is very challenging. The major parts of the track are ups and downs and it’s amazing to see the riders handling the course with this relatively high speed.”

Maysa Ahmed Hasan Al Braiki partnered Aziza to finish the first loop in one hour, 35 minutes and 11 seconds at an average speed of 17km/ hour.

“I think this is a very good effort from Maysa and should the young lady manage to keep the same tempo at the early stages she will do the better job in the concluding stages,” said Mosallam Al Amri, director of Al Jazira 1&2 Stables.

Meanwhile, Al Romaithi extended her lead by the end of the second 28.6km pink loop to 7 minutes and 43 seconds, ahead of the Spanish runner up who continued to chase the UAE girl. At this stage, and while the Spanish lady Villalon Aurora has maintained her third place, the Spanish rider Jose Pedro Filipe, riding, Beleza Dos Chapparos, advanced from ninth to third to put the front runners under more pressure. But, he has too much work to do in order to close the 11 minutes and 32 seconds gap which has developed between the riders.

In the meantime, Al Romaithi continued to lead and maintained her eight minutes gap by the end of the 25km yellow third loop with two loops measuring 20km each remaining to cover.

The other UAE lady Maysa Al Braiki started her forward move to close the gap to four minutes with the second-placed Spanish lady and remained 12 minutes off the pace as the Spanish riders dominated the second, third and fourth places with the French rider Joel Marescassier promoted to the fifth position.

But, the Spanish lady Villalon Aurora Torres soon bounced back and hit the front as the leaders covered the penultimate 20km white loop with the finish line appearing under the horizon with the final 20km fifth stage which was also marked in white remaining. At that junction, the early UAE leader Ayesha Darwish Al Romaithi has dropped back and settled seven minutes off the pace in the fifth position before she fell down and pulled out of contention.

“The initiative of HH Sheikh Mansoor bin Zayed Al Nahyan and HH Sheikha Fatima bint Mubarak is highly regarded in Portugal and the sponsorship of this national event for the first time has received the highest level of attention from the top officials in the country and was widely covered by the media,” he added.

Sawaya said: “We are truly proud of the great success which has been achieved by the festival at this very beginning, but this is only the start and there are more surprises and initiatives to come under the directives and vision of HH Sheikh Mansoor bin Zayed Al Nahyan and HH Sheikha Fatima bint Mubarak, Mother of the UAE,” she said.

“We are also thankful to all our partners, the officials and the media as well as the girls who have showed a great fighting spirit and courage in their first international campaign. We are sorry for the unfortunate fall of Ayesha Al Romaithi after doing a great job and luckily she’s safe and in good health.

“All the girls have otherwise completed the challenging race and they will take part in the HH Sheikha Fatima bint Mubarak Ladies Endurance CEIO Cup in Verona Italy on July 25th,” she added.

Moroccan ambassador to Portugal Karima bin Aish commented: “I feel proud to be an Arab woman thanks to the initiative of HH Sheikh Mansoor bin Zayed Al Nahyan and HH Sheikha Fatima bint Mubarak, Mother of the UAE. Now, the image of the Arab women in the west has changed due to this great effort of the HH Sheikh Mansoor bin Zayed Al Nahyan Global Arabian Horse Flat Racing Festival. The promotion of the Arabian horse is equally a promotion and support to the heritage and culture of all of us as Arabs.”