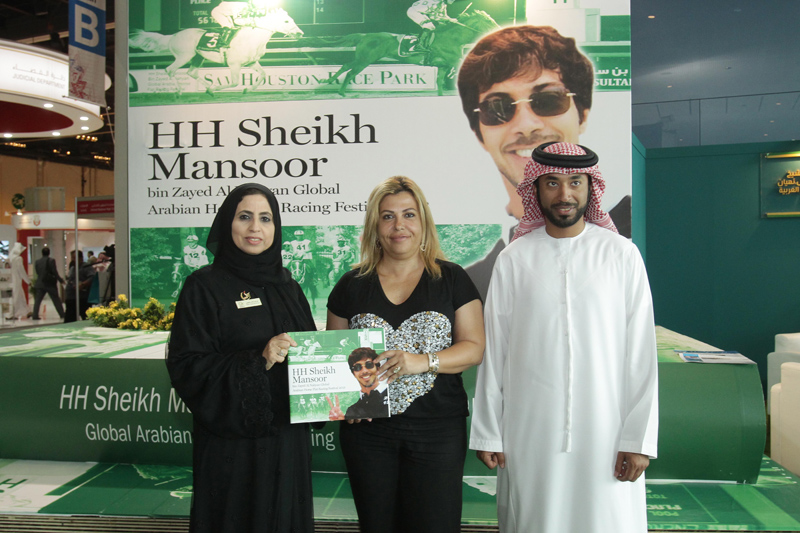 The hard-bound book sporting a picture of His Highness Sheikh Mansoor bin Zayed Al Nahyan, the UAE’s Deputy Prime Minister and Minister of Presidential Affairs on the cover page runs into over 300 pages and has been edited by M. Satya Narayan, the ex- Abu Dhabi Deputy Editor of Gulf News, who has been covering horse racing activities for over two decades.

A host of VIP visitors visited the Festival’s stand and sought copies of the latest Year Book 2013.

Commenting on the launch of the third successive edition of the Sheikh Mansoor bin Zayed Al Nahyan Global Arabian Horse Flat Racing Festival, Sheikh Sultan BinTahnoon Al Nahyan, Chairman, Abu Dhabi Tourism & Culture Authority said, “We are proud to see the Year Book roll out for the third year in a row. The support of His Highness Sheikh Mansoor bin Zayed Al Nahyan and Her Highness Sheikha Fatima bint Mubarak, Chairwoman of the General Women’s Union, Supreme President of the Family Development Foundation and Head of the Supreme Council for Motherhood and Childhood, has made the Festival as one of TCA Abu Dhabi’s leading events and is well reflected in this Book.”

Ms Lara Sawaya said, “This is truly unparalleled in the horse racing world. In fact there is no other book published on any race series in the world, be in Purebred Arabian racing or thoroughbred racing.”

“The Purebred Arabian racing fraternity was excited and proud to receive the first two editions and this third edition will make them even happier. The Book has captured all the exciting moments on and off the tracks during the year 2013 and is not only a record of all the Festival’s activities but also portrays the huge impact of the Festival on Purebred Arabian racing,” Ms Sawaya said.